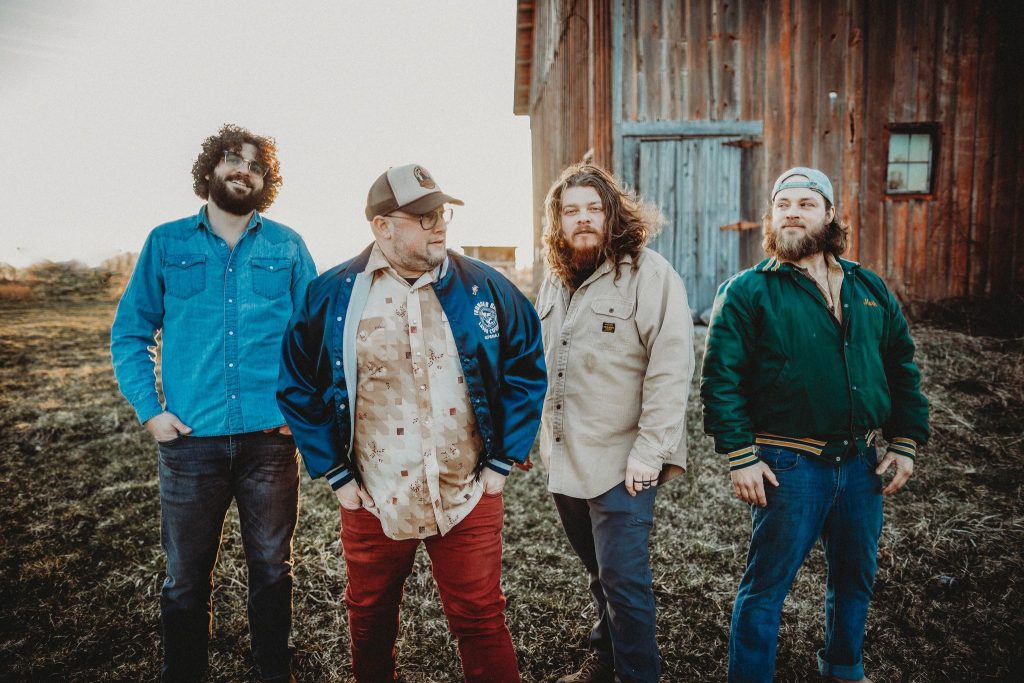 When noteworthy West Michigan musicians Mark Lavengood, Andy Szumowski, Nathan Walton and Kyle Brown started jamming together, it didn’t take long for them to conclude, “Let’s just be a band.”

As for naming that band King Possum, well, that’s another story that’s a bit more difficult to pin down.

“We all like George Jones and they called him ‘The Possum’ because he looked like one,” Szumowski offered. 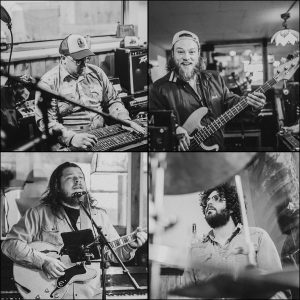 The Boys in the Band: King Possum (Photo/Sara Herzog)

“I have a cat that kind of walks like a possum,” suggested Walton.

Of course, the boys also have spent months “scurrying around” like musical marsupials in Lavengood’s barn and recording studio in Coral, Mich. – aka, “The Bear Den” – writing new material and laying down initial tracks for this country-hued, super-group project.

“Style-wise, it’s mostly like country and kind of our own spin on country,” said Walton, who recently released his own studio project, “Nathan Walton & The Remedy,” which leans toward soulful rock.

“Personally, I feel it lands somewhere aspiring toward country and roots with honky-tonk and rock ‘n’ roll on the pedestal peering about,” Lavengood said.

“King Possum is an eclectic group of songwriters and multi-instrumentalists whose backgrounds are deeply rooted in the rich soil of North American music – founded on a common love of honky-tonk, outlaw and other country stylings.”

For this week’s edition of Local Spins on WYCE, King Possum delivered the world premiere of two new tracks – “Keep Every Fish” (inspired by Walton’s grandfather) and “Going Home Tonight” (written by Brown) — freshly recorded and undergoing their final mixes just this week. Scroll down to listen to both songs, the band interview and the full radio show podcast.

‘EVERY GIG WE CAN BOOK, WE’RE GONNA BOOK’

Like Walton, all of the band members come to King Possum from their own projects and other groups.

Lavengood, formerly a Dobro player for Lindsay Lou & The Flatbellys, fronts his own bluegrass band and accompanies several other artists; Brown has long fronted the Southern rock-leaning Bigfoot Buffalo; Szumowski, among other things, plays drums and pedal steel guitar for singer-songwriter Cameron Blake and percussion for The Deep Stare.

But while King Possum certainly qualifies as a side project for this bunch of busy West Michigan multi-instrumentalists (who swap instruments on many of their songs), there’s clearly loads of unbridled passion for this unique and good-humored collaborative endeavor. 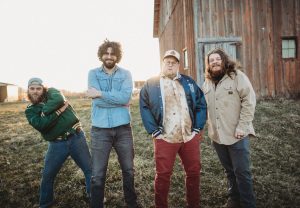 ‘A Nice Fit of a Group’: King Possum (Photo/Sara Herzog)

They’ve already penned upwards of 20 originals and plan to unfurl a handful of covers by artists such as the aforementioned George Jones, Little Feat, Willie Nelson and Davis Raines.

They’ve also got eight performances booked so far this year, with more on the horizon. The band plays Tip Top Deluxe Bar & Grill in Grand Rapids at 7 p.m. Saturday (May 29), with Carrie & The McFerrinheits opening the show. Tickets are $15; details here.

“Every gig we can book, we’re gonna book,” said Walton. “I’m just doing everything I can to get out there more and play, so I’m happy to be in a couple of bands.”

And because “everyone in the band is playing every instrument,” Szumowski said, fans can expect “a kind of bizarre musical chairs on stage. … It’s a tour de force.”

“That’s why it’s really a nice fit of a group,” added Walton, “because we’re just backing each other up and trying to play it for the song.”

Beyond spotlighting new tracks from King Possum, this week’s edition of Local Spins on WYCE – which focuses on Michigan-made music at 11 a.m. Fridays on WYCE (88.1 FM) and online at wyce.org – also featured new music from EPCYA, ttypes/.Shi/Keeynote/Captain Daddy, Sherdizzil, Laura Rain & The Caesars, Ally Evenson, The Accidentals and Lord Huron, as well as songs by The Soul Syndicate and The Bootstrap Boys (this week’s musicians’ pick by King Possum). Listen to the full radio show podcast here.