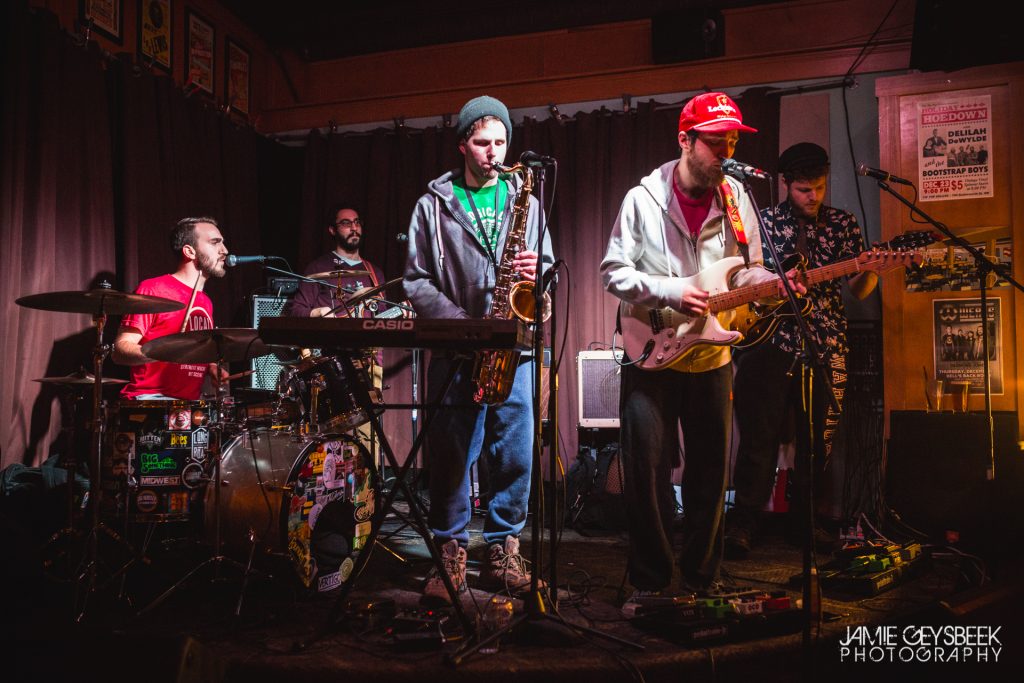 Layers of melody and rhythm project off the walls of a mostly empty room at the Tip Top Deluxe Bar & Grill.

Instruments are tuned and volumes adjusted.

It’s early, in terms of bar time, and in an act of muscle memory, Desmond Jones sets the stage and begins sound checking for the band’s weekly residency at the intimate West Side watering hole. 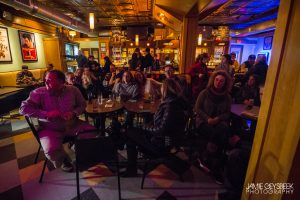 “I am heartbroken that they’re leaving me,” says Monika Pelikan, who tends bar on Monday evening. “It’s grown into this crazy big show to the point where now I have to call in help on Mondays. They’ve just become part of the bar.”

For the past year-and-a-half, the funk-fueled jam band has called Tip Top home, conducting a free weekly concert every Monday night, a series which is drawing to a close.

After staging more than 50 shows at the Tip Top, there’s an overriding sense of comfort at work here.

After sound check, everyone pulls up a chair at a high-top table in the center of the room: John Nowak (drums), Isaac Berkowitz (guitar/vocals), Chris Bota (guitar/vocals), George Falk (saxophone) and John Loria (bass) all sit in a circle.

“I think it’s one of the best things that’s ever happened to us,” Nowak says of the residency. “I think you grow most as a band by getting experience. With all that practice, we’ve become so tight. It’s kind of like playing in our living room at a certain point.”

Stories from previous Monday night shows are shared around the table and received with plenty of laughter. Once, a man dressed from head to toe as a cowboy paraded around the bar with no shortage of inebriation or western eccentricity. There was the nomadic didgeridoo player.

Another time, two women barged into the venue and confidently took to the stage for what they presumed was live-band karaoke. The duo proceeded to commandeer a microphone and make song requests of the band mid-set.

“We faked our way through ‘Say it Ain’t So’ by Weezer for the first time ever while these girls drunkenly sang along with us,” Nowak says, spurring a rupture of laughter from the table.

“One of the girls even told George that there weren’t any horns on the song and that he had to get off stage!” says Bota.

In addition to hilarious debacles on stage and improvised guests, the band has regularly welcomed other local musicians to sit in on sets.

Although the showcase has been an overall success and a positive experience, it has included some expected challenges and an understanding that all good things must come to an end.

“It can be tiring,” says Bota. “After playing a full weekend of shows, you throw in a four-hour set on a Monday and it can be a lot.”

“Just trying to get people out on a Monday night can sometimes be a challenge too. There’s a lot of hits and misses,” says Nowak. “But overall, our attendance has been really awesome.”

It seems the residency has become a communal experience — a time for the band to connect and give unconditionally to their local fans.

“The people who do come regularly have seen us in all shapes and sizes, in all capacities and mental states. They’ve seen some of the best jams we’ve ever played … and some of the worst,” says Nowak.

“We have a lot of die-hard fans who come every week,” Berkowitz added. 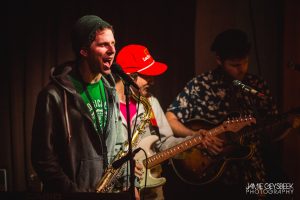 Between shows and tours, the band has spent time in the studio fleshing out a new album at Level Up Studios, a recently established practice space, recording studio and artist management company in Grand Rapids.

“This project will have songs that are a lot more structured,” says Nowak.

“It’ll be very eclectic … a little bit of everything,” adds Berkowitz. “We want to release some nice, packaged, tight songs … and a couple killer jams.”

Although Desmond Jones’ specialty is their live show, the group has fully embraced the new territory of studio recording.

“It’s a new challenge musically, which is fun,” says Berkowitz. “It makes us think in different ways about the song. Being in the studio is a blast and we hope to be there as much as we can.”

The band has its sights set on a busy 2017, with a spring album release, an Eastern U.S. tour and summer festivals, with the hope that the album “provides a big push.”

That also means making the “bittersweet” decision to end the residency “to scale back our playing in Grand Rapids and really focus on the market so we aren’t over-saturating it with a free weekly show now that we’ve built a good fan base in the city,” Nowak says.

‘DO WHAT YOU LOVE WITH THE PEOPLE YOU LOVE’

“The ultimate goal would be to do this as a full-time job,” says Bota. “I just can’t do anything else. I’ve tried to do other things and they weren’t for me. I know what I should be doing and this it.”

Loria adds a concluding sentiment and the rest of the group readily agree: “Do what you love with the people you love the most.” 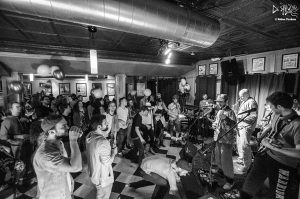 Regulars begin to wander in through the side door and the room starts to fill. A sense of tradition takes over. One of the guys doodles on the back of a poster, and pens the details for the evening’s show in black Sharpie before passing it to Jacob, who mans the door.

The guys stand up from their seats and make their way towards the stage. Pushing in his chair, Bota points out one more regular Monday night occurrence.

“Oh, and we always wear sweatpants. Most people don’t feel like getting dressed up and going out on a Monday, so we tell everyone to just wear sweatpants,” he says as each musician shows off his baggy, lounge-worthy comfort wear.

“Hey Monica, you got your sweatpants on?” Nowak asks of the lively bartender.

Kicking her leg up over the bar, she shoots back with a brimming smile. 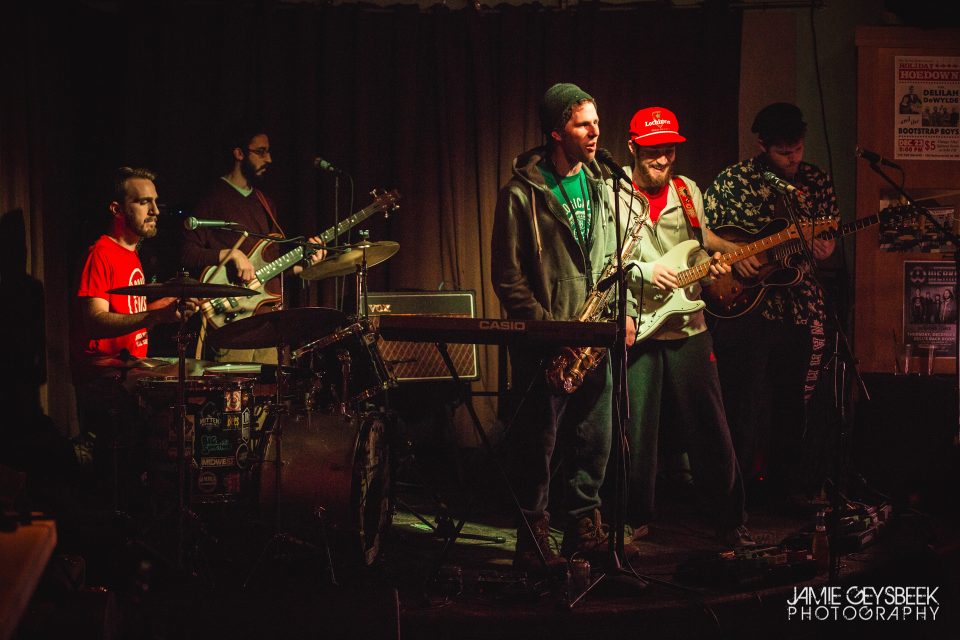 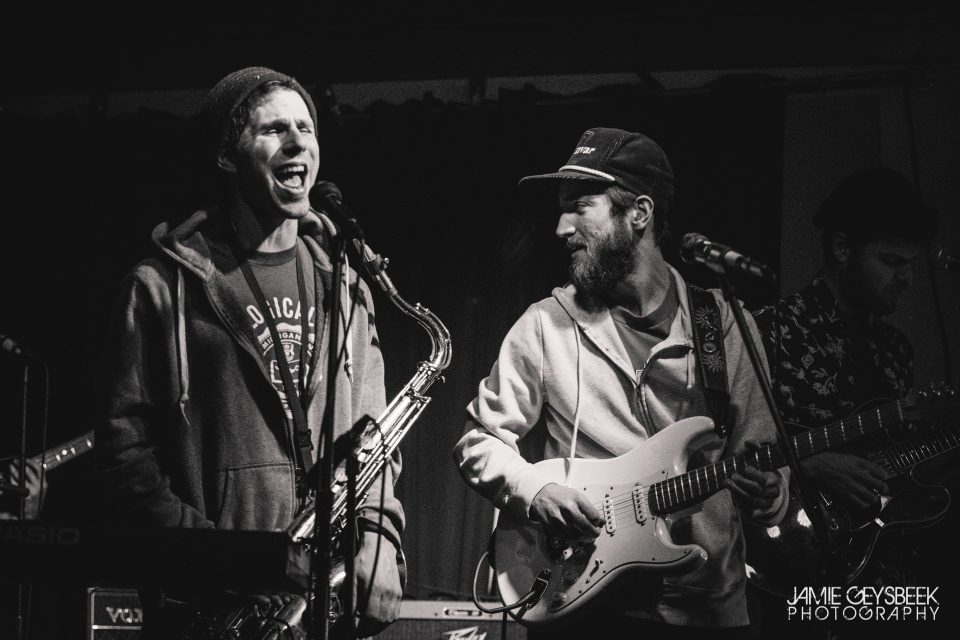 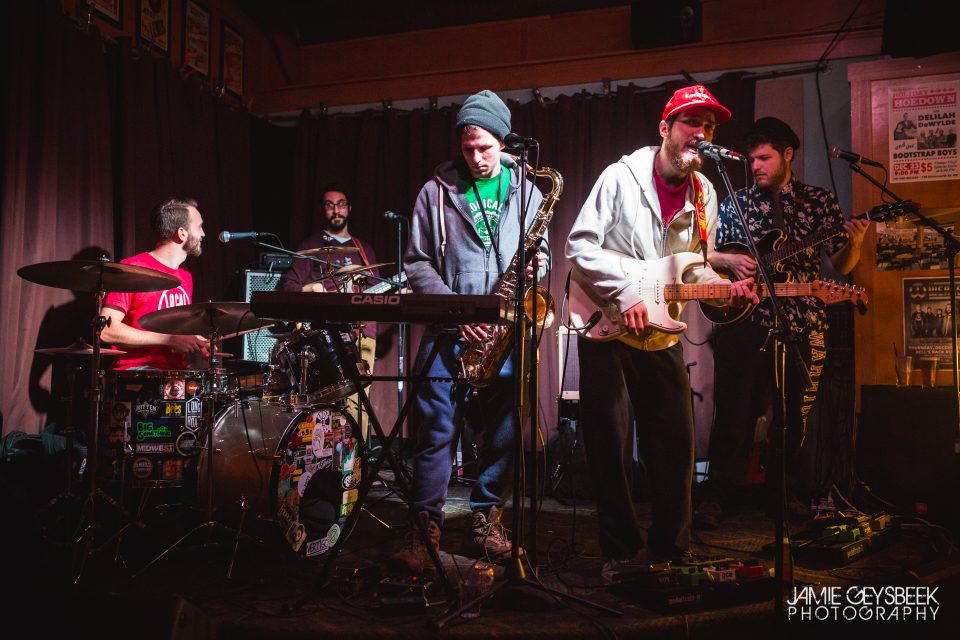 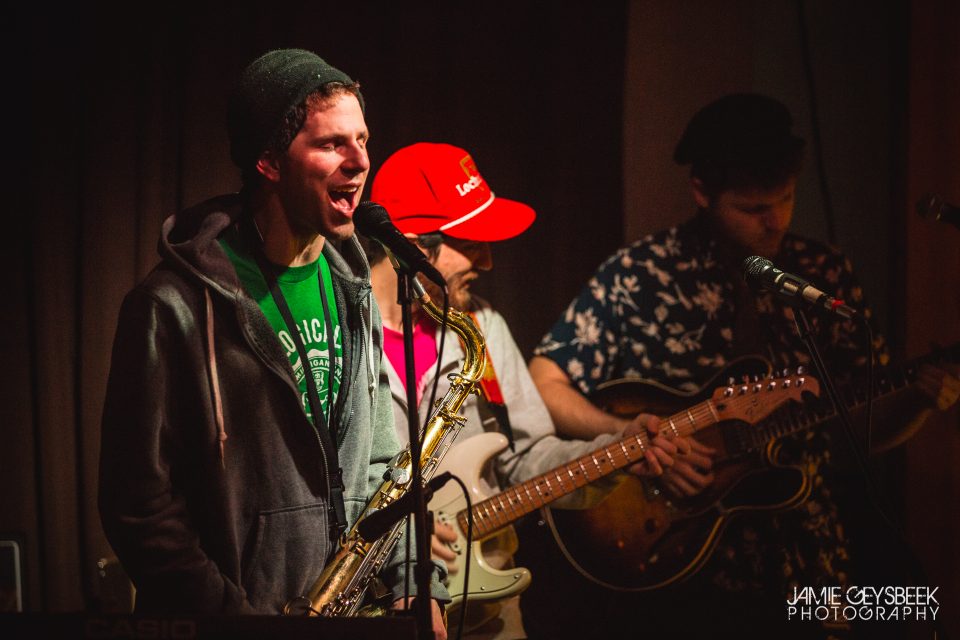 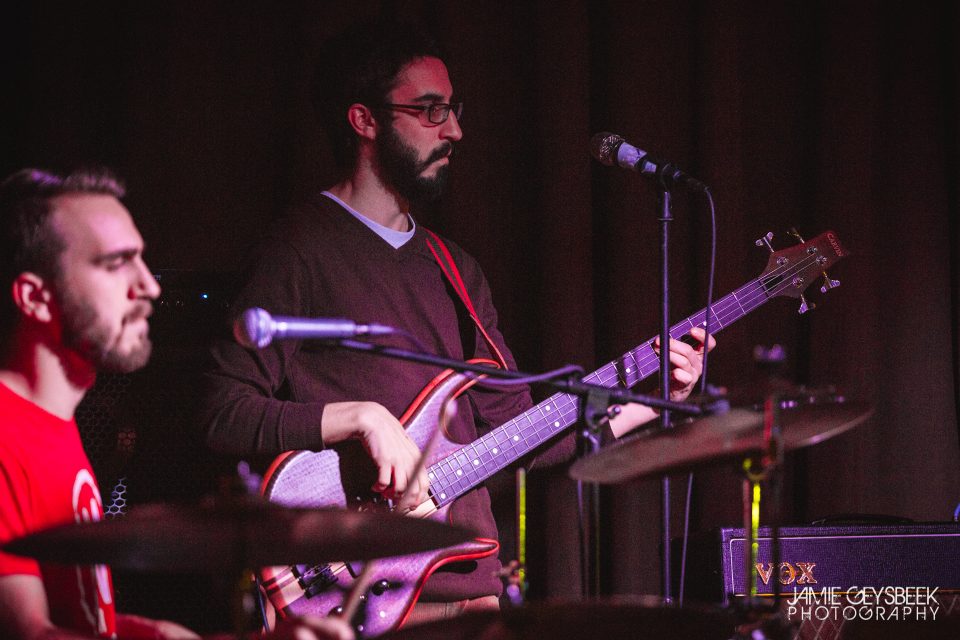 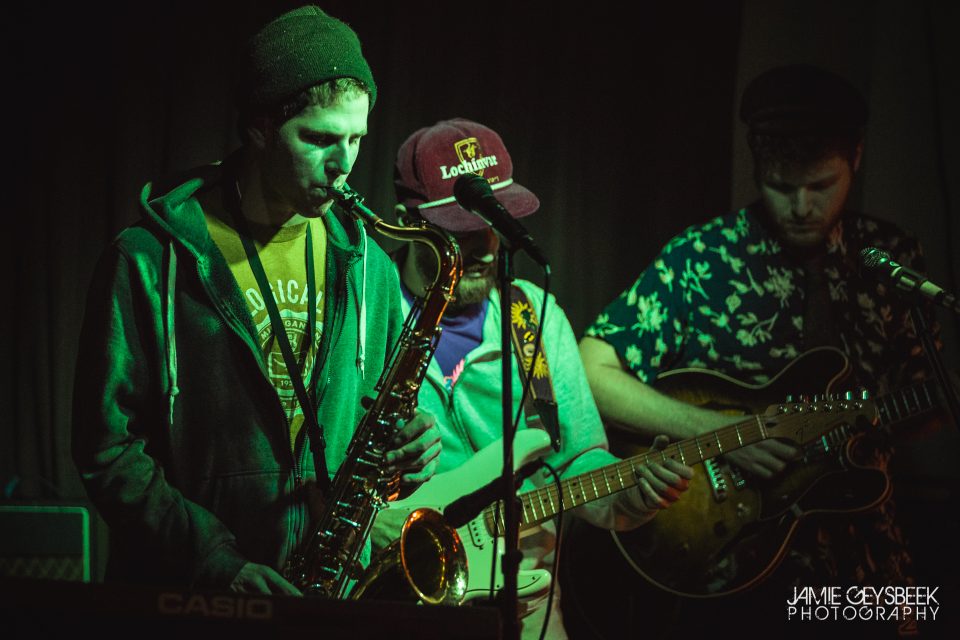 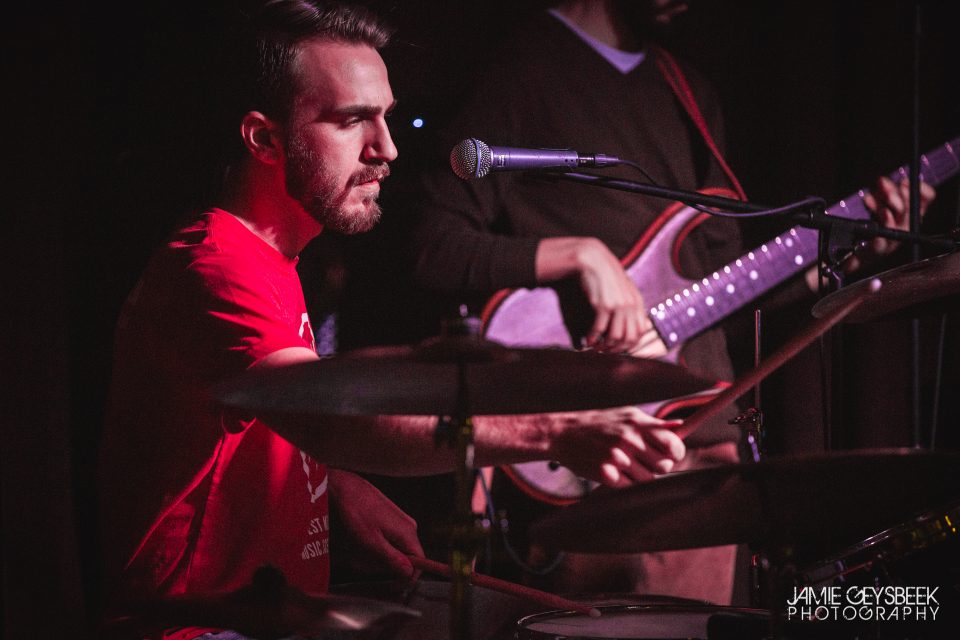 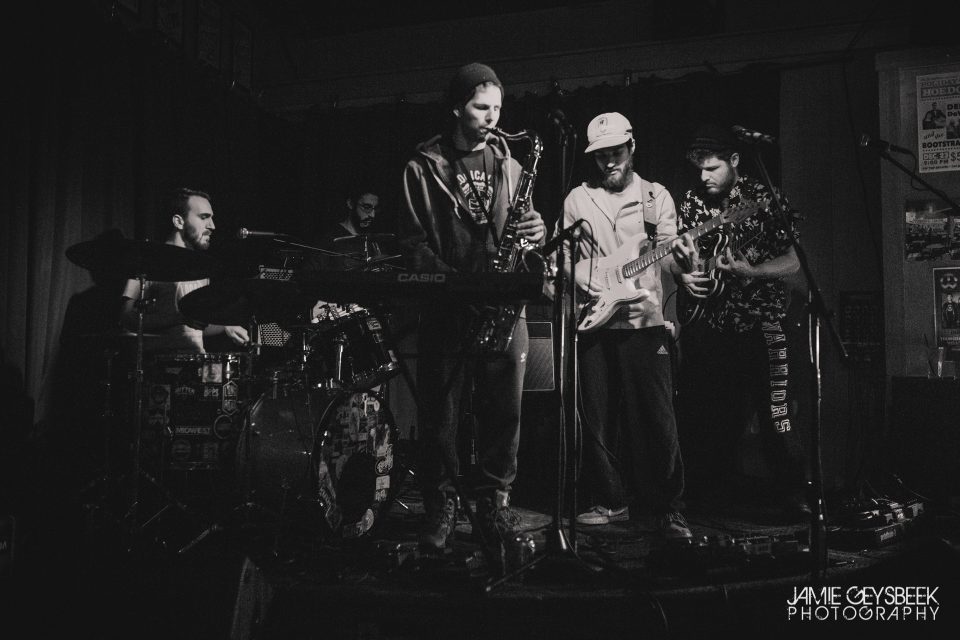 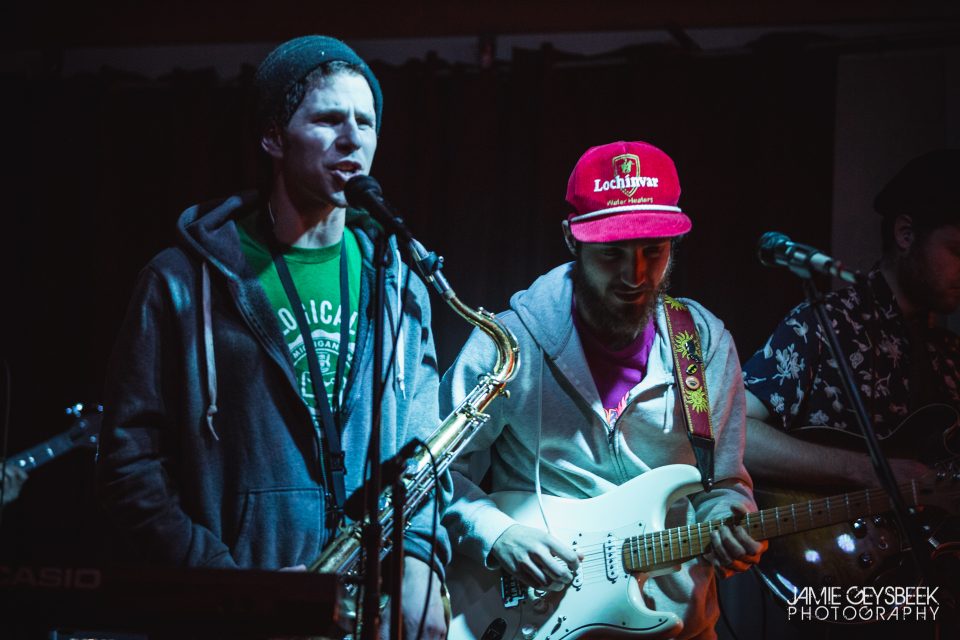 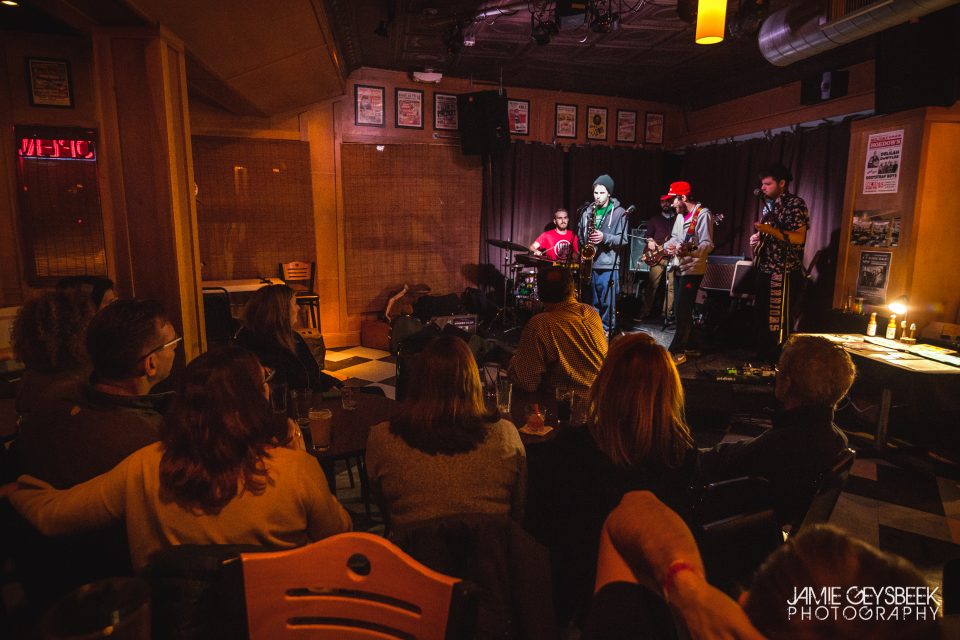 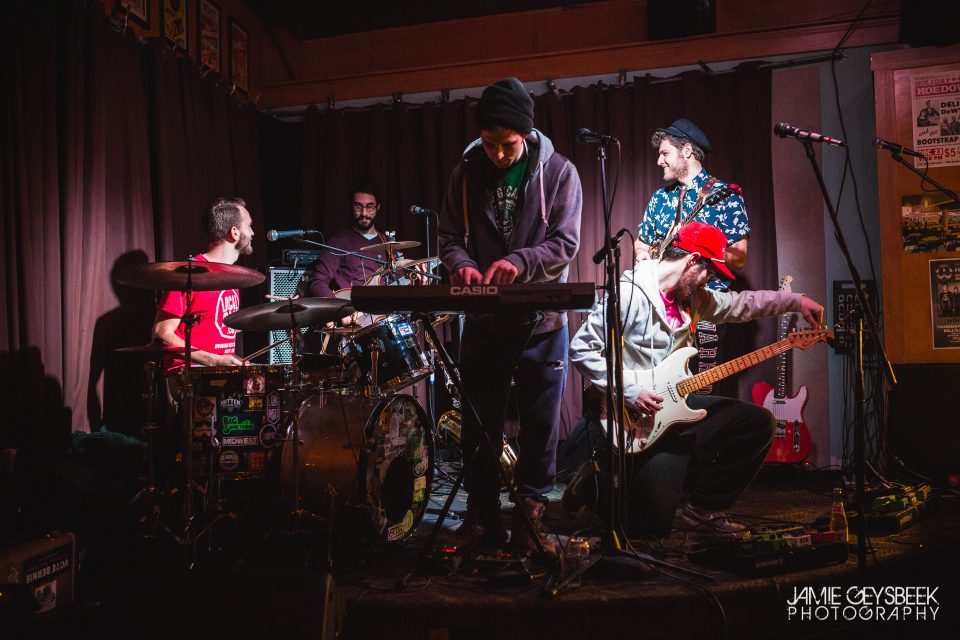 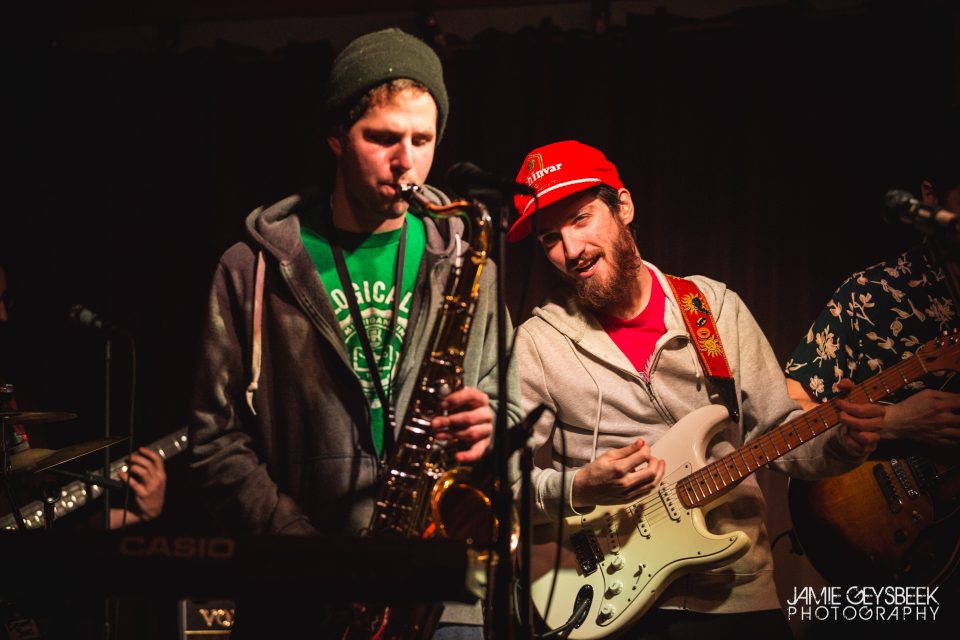 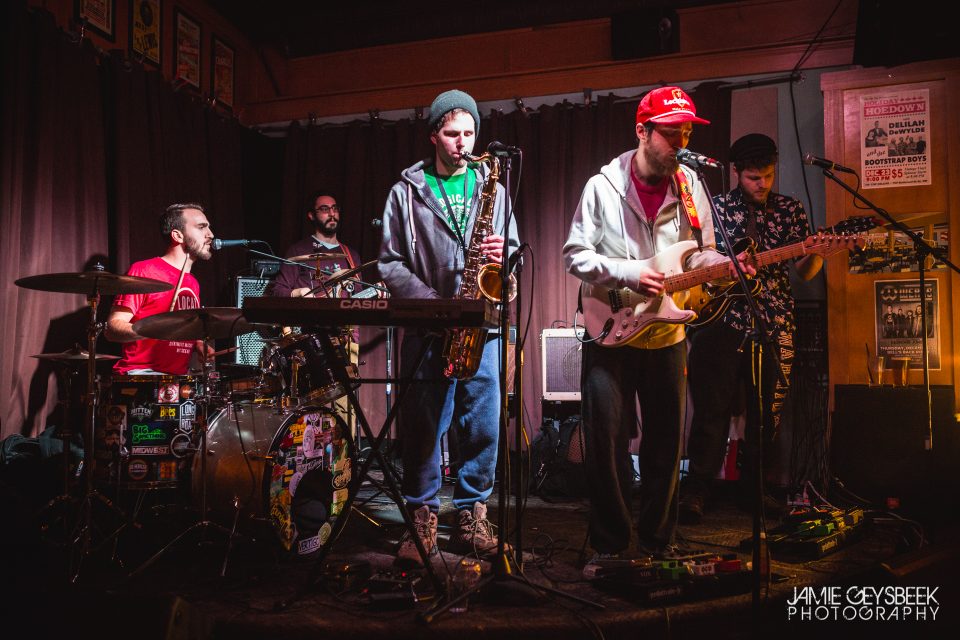