With a new album and an upbeat attitude, the trio aims to build its fan base across the Midwest and beyond, starting with Friday’s Pyramid Scheme show. (Podcast, video) 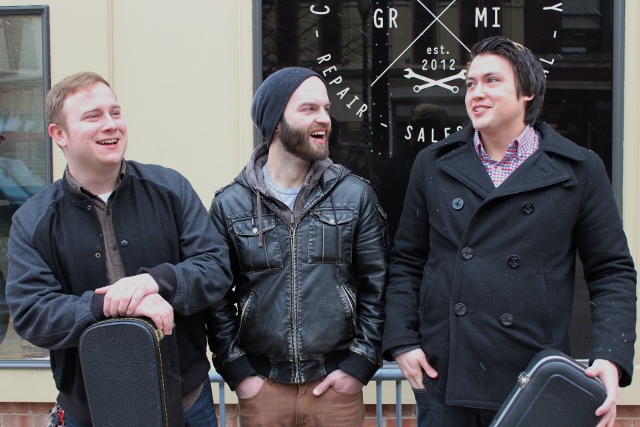 Nearly every rock band has a “cautionary tale” about touring the country, whether it’s a lackluster gig in a near-empty bar, gear that goes missing or a crew member who calls it quits.

In the case of Grand Rapids’ Midwest Skies, says drummer Josh Jones, it’s an ailing van that last summer set the record “for the most quarts of oil used on tour.” 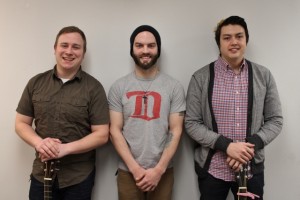 But for this upbeat pop-punk outfit – which is saving up its shekels for replacement wheels – the story line so far has mostly been an optimistic and cheery one as the trio builds its audience across the Midwest, South and even Canada, one city at a time.

“We call all of our fans our friends,” says bassist and singer Ryan Ykimoff. “We’ve bonded and made very close connections with people in all the places we’ve toured. It’s about forging a really strong connection with these people and forgetting about your problems for those 30 to 45 minutes.”

The band, which released its most recent, EP, “Wish You Were Here,” in September, has made plenty of friends in places as far-flung as Buffalo, N.Y., Knoxville, Tenn., and Chicago, Ill., unfurling its infectious pop-punk strains for enthused crowds of teens and 20-somethings who appreciate Midwest Skies’ exuberant stage show.

GETTING FANS ‘JUMPING AROUND, MOVING AROUND’

“We absolutely crave energy. We love crowd participation,” insists Ykimoff, a Jackson native. “We like to get people’s hands in the air. We like to get them jumping around, moving around. It’s an experience for us to share with the crowd.”

It’s also about carefully crafted and arranged songs such as “Like Me, Like You,” the lead single off of the band’s latest album. Ykimoff and guitarist James Johnson delivered an acoustic rendition of that song in the studios of News Talk 1340 AM (WJRW) on Wednesday as featured guests on Local Spins Live. Watch a video of that performance below, with a podcast of this week’s show here.

The song leads off a recording project that signaled an important milestone for the band, formed in 2009 when members were students at Grand Valley State University.

The trio took time off from day jobs and left other West Michigan distractions behind to spend a week last year at Indiana’s AlwaysBeGenius Recording Studio, owned by guitarist Seth Henderson of Chicago pop/rock band Asteria.

“We played our very first show with them at Grand Valley back in 2009,” says Johnson, who’s originally from Elizabethtown, Ky., adding that “a lot of up-and-coming big bands on the scene” have chosen to record at AlwaysBeGenius. 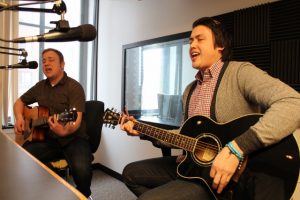 “Writing the songs was a completely different experience for us, being in one place the whole time, everybody there to give their input,” he recalls of creating new tracks in the studio. “Some things that work for one person won’t necessarily work for another, so it was nice to play around with new ideas.”

Says Ykimoff: “It really helped our creative energy to all be there at the same time and be able to give each other instant feedback (rather than recording tracks separately in the studio). I think it made us a lot tighter as a group.”

It’s also a process that helped band members seamlessly mesh their varied influences as musicians, from Jones’ pop-punk zeal for bands such as Blink-182 and Yellowcard, Ykimoff’s heavy metal background and Johnson’s penchant for indie and alternative bands. The band even injects its live sets with unusual covers, from nods to ’90s hip hop to classics by Good Charlotte and Third Eye Blind.

“The big thing with our music is we all have different styles of what we listen to, and we all bring a different thing to the table,” says Jones, a Farmington Hills native. 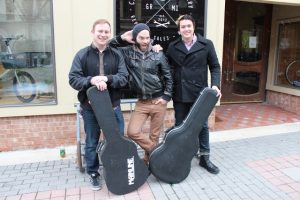 On Friday, Midwest Skies headlines a show that brings a host of different genres to the table. “Welcome to Grand Rapids, Volume 2” at The Pyramid Scheme spotlights several West Michigan acts, including Jake Down & The Midwest Mess, The Legal Immigrants, Good Day Good Sir and Red Legs. The show begins at 7 p.m. Friday; tickets are $8 in advance, $10 day of show. Details and tickets online here. (Midwest Skies also plays The Loft in Lansing on Thursday night.)

“There’s a lot of awesome talent in Grand Rapids that will be showcased there, a lot of bands we don’t get a chance to play with in other shows,” Ykimoff says of the diverse mix of acts.

The early 2014 concert kicks off what the trio hopes will be a busy year of touring behind the new album, with possible jaunts to the South and the West – and, says Ykimoff, perhaps some unpredictable bookings that spawn “new adventures.”