SCROLL DOWN FOR THE LOCAL SPINS ON WYCE PODCAST FEATURING LADYFEST PERFORMERS JESSICA IN THE RAINBOW AND MADDIE JACKSON, PLUS THE DEBUT OF NEW TRACKS BY THE HOWLERS, TRASH HOUNDS, CONCUSSIONS AND MORE

It’s a day to celebrate and spotlight female voices from West Michigan, from women who lead bands to female singer-songwriters and poets. 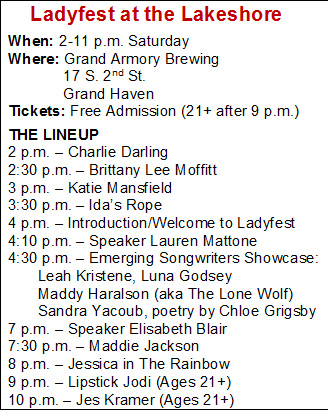 Save this image on your smarthphone

The first-ever Ladyfest at the Lakeshore takes place 2-11 p.m. Saturday at Grand Armory Brewing, 17 S. 2nd St. in Grand Haven. The one-day festival will feature musical performances by about a dozen acts, a discussion about women composers and an open-mic showcase.

The lakeshore celebration is a spin-off of the popular Ladyfest GR that celebrated its fifth year in March.

“The event keeps growing, from nine featured acts, both bands and solo singer/songwriters, and even local poetry,” said organizer Jessica Fogle who also performs as Jessica in the Rainbow. “We will feature a variety of music styles in our performances, as well as an ‘emerging songwriter’ showcase and open mic, where people can come in, put their name down on our sign-in sheet, and share their own talents, as well.”

Fogle, a singer-songwriter and pianist, based the event on ideas from the Grand Rapids Lamplight Music Festival and Ladyfest GR, where she performed. Ladyfest GR gave proceeds to Girls Rock Grand Rapids; for Ladyfest at the Lakeshore, Fogle decided to raise money for a Chicago-based organization, Girls Supporting Girls, which supports education for girls in Asia and Africa.

PERFORMERS COMING TOGETHER FOR A GOOD CAUSE

“It was everything I hoped it could be,” Fogle said of the partnership with Girls Supporting Girls. “With a smaller-scale charity such as this, your personal efforts can do a lot more good, and the funds we raise can go a lot further.” 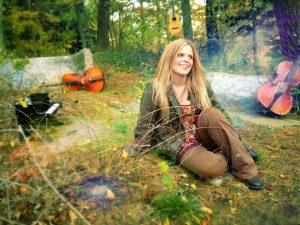 Jessica Fogle, aka Jessica in the Rainbow

Fogle has greater plans for the future of Ladyfest at the Lakeshore, such as using multiple venues and rotating cities around the Lakeshore from year to year. For next year, Fogle has her sights set on Muskegon, and Holland for 2018.

“There are so many things we can do with this,” she said.

“A few places around the music scene tend to lend more exposure — and confidence-building attention — to males,” Fogle said. “This may discourage some female performers from giving it their all, for fear of rejection or failure.”

“Part of the reason I really believe in men also being present, as both sponsors and supporters, is that with a lot of movements, a lot of momentum and validity can also come from supporters outside the movement itself,” she said. “It’s not as effective to bring people together for a cause, if you leave a bunch of people out in the process.”

All proceeds from sales of T-shirts, buttons, patches and mix CDs at the merch booth on Saturday will go to Girls Supporting Girls. Attendees also can donate $5 for one raffle ticket or $10 for three raffle tickets for a chance to win gifts donated by a variety of sponsors.

Fogle and Maddie Jackson made a stop for this week’s edition of Local Spins on WYCE, performing original songs in the community radio station’s Studio X, chatting about their own music and discussing the upcoming Ladyfest at the Lakeshore event.

Listen to the full podcast below, with the premiere of songs by Matt Ten Clay & The Howlers, Trash Hounds, Bryan Ralph, Diff & Dudley, The Underground Circus and The Concussions, as well as music from Seth Bernard, Hannah Rose Graves & Justin Wierenga and The Verve Pipe (which plays Bell’s Brewery in Kalamazoo on Saturday night).

PODCAST: Local Spins on WYCE with Jessica in the Rainbow, Maddie Jackson