It’s Friday, the perfect time to round up music news about an expanded summer jazz fest, more Mitten music and a bunch of under-the-radar weekend shows. 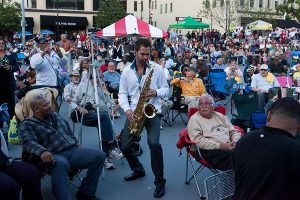 Tooting Its Horn: GRandJazzFest has announced that it’s coming back and expanding to two days.

CHECK OUT MORE OF SPINS ON MUSIC’S PICKS OF THE WEEK IN LIVE MUSIC IN THE GRAND RAPIDS CONCERT GUIDE, aka THE BIG LIST HERE

The summer buzz already has begun with an upcoming Bonnaroo lineup announcement on YouTube by Weird Al, Electric Forest in Rothbury already has sold out of “early bird” tickets and word is that organizers are working on plans for a return of Rock the Rapids in downtown Grand Rapids this summer. But there’s also this:

GRANDJAZZFEST RETURNS — With more than 4,000 jazz lovers pouring into Rosa Parks Circle in downtown Grand Rapids last summer for the first-ever GRandJazzFest, organizers have decided to up the ante for 2013.

This year, the free August festival will expand to two days with 10 different acts expected to perform in the event presented by the DTE Energy Foundation.

The festival will be held the weekend of Aug. 17-18, with bands and performers announced in coming months, according to event founder Audrey Sundstrom. In a prepared statement, she said the lineup would celebrate the “incredibly diverse” nature of the genre, including Latin, straight-up, contemporary and Big Band.

For 2013, organizers plan to spotlight Michigan and “nationally known jazz performers” with a national headliner. For more details, visit the official GRJazzFest website. 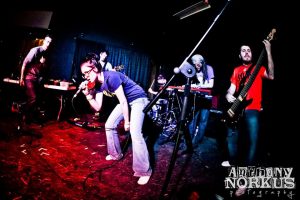 King of the Mitten: Muskegon’s King Crabapple plays the Inside the Mitten series.

INSIDE THE MITTEN CONCERT SERIES CONTINUES IN MUSKEGON – Muskegon hip-hop ensemble King Crabapple will headline 2013’s first “Inside the Mitten” concert on Feb. 15 at Watermark 920.

The Inside the Mitten series, which began last year as a way of showcasing Michigan-based bands and musicians, is hosted by Watermark Live with a focus on acts which “exhibit rare potential.” The series will continue with concerts on March 22 and April 19.

Tickets for the Feb. 15 show are $10 in advance, $12 the day of the show. Tickets available online here.

The evening will include a discussion with King Crabapple moderated by Lou Jeannot, co-founder of Mux Records, which features the night’s acts in its stable of artists. Doors open at 6 p.m. with music beginning at 7 p.m. The venue offers seating and dancing, Michigan beer and wine, a fully stocked bar, coffee and sandwiches. The six-piece King Crabapple with Julie Hackney on vocals has become a favorite in the Muskegon area. Learn more about the band at its website. 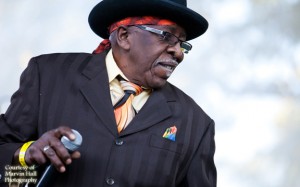 GROUNDHOG DAY CONCERT PICKS – Amid the flurry of flurries and the flurry of live music options (many of them covered earlier this week by Spins on Music’s Big List which you can check out right here), you may have overlooked a few gems taking place on Groundhog Day, otherwise known as Super Bowl Eve, in terrific little out-of-the-way venues.

Root Doctor at Rockford Brewing Co., 7 p.m. Saturday, free: Next Thursday, the brand new Rockford Brewing, 12 E. Bridge St., kicks off its regular Thursday night music series with Grand Rapids singer-songwriter Nicholas James Thomasma. But on Saturday, the brewpub celebrates Groundhog Day with a blues show worth toasting with many beers: Lansing’s Root Doctor is certain to christen the upstairs with a blues bang. Admission is free and the beer is tremendous.

Filthy Cur and Jake Stilson in a Groundhog Day Extravaganza at Tip Top Deluxe Bar & Grill, 9 p.m. Saturday, $3 21 and older, $5 18-21: The Tip Top gets all rockabilly-like on Friday with the up-and-coming Nikki Hill and Delilah DeWylde & the Lost Boys. But on Saturday, it’s the jazzy, ragtime-styled hip-hop of Filthy Cur meeting the Americana-hued rock of Grand Rapids’ Jake Stilson, who has a new album, “Stilson Shmilson,” to promote.

The Jimmie Stagger Band playing the Vestal Bar & Grill in Belmont at 8:30 p.m. Saturday, free – Speaking of Michigan blues, local icon Jimmie Stagger returns to the Vestal Bar & Grill, 6255 W. River Drive NE, bringing along his gigantic catalog of blues tunes, stellar guitar-playing and soulful singing. So as they say, get there early if you want to, like, find a seat.