After a three-year COVID hiatus, 85 acts will play a more subdued festival on Earthwork Farm outside Lake City next weekend. See what attendees can expect in this Local Spins preview. Haven for Reunions: Earthwork Farm has been revamped for this year’s festival. (Photo/Anna Sink)

SCROLL DOWN FOR HARVEST GATHERING LINEUP

Michigan’s music community describes it as “a big-hearted” celebration staged amid a reunion-like weekend of “love and kindness.”

So the much-anticipated return of the season-ending Earthwork Harvest Gathering this weekend after a three-year COVID hiatus has hundreds of musicians eager to reconnect with fellow players and devoted fans.

For Seth Bernard, longtime organizer of the northern Michigan festival taking place on his father’s farm outside Lake City, the intervening years gave him an opportunity to make some changes in approach to the beloved event. Welcome Return: Fans and bands will be back this weekend. (Photo/Anna Sink)

In essence, Harvest Gathering’s revamped mission aims to create “a nice chill landing zone for folks this year,” Bernard said, adding that the more compact event serves as “a great way for Harvest Gathering to get back to its roots after a few years off.”

That means turning the festival’s fourth stage into an unamplified “acoustic jam” tent, setting up a natural playground and sound garden, and staffing “The People Care Tent,” which Bernard calls “a quiet space for decompression with professional support.”

“Earthwork Farm has always been a place where people have taken refuge from some of the exhausting perils and pressures of our society,” Bernard said of the event founded in 2001. 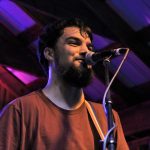 Bernard stressed that while Harvest Gathering strives to avoid what’s become an often overstimulating and overwhelming music festival experience – and serve as an alternative to “the slime of corporate commercial culture” – the 2022 celebration still boasts a jam-packed lineup.

The roster features everything from folk-hued favorites such as The Accidentals and The Crane Wives to hip-hop standouts Lady Ace Boogie, Jordan Hamilton and Nique Love Rhodes to diverse soulful acts Earth Radio, Molly and Serita’s Black Rose to rock bands and singer-songwriters.

“We feel like 85 fantastic acts on three stages is still a ton of options, and going unplugged on the north end opens up a space for people of all ages and skill levels to collaborate and pick along with some of their favorite Michigan musicians,” he said.

“Folks will see a lot of positive changes on the farm. We’ve been working hard. Other new changes at Harvest include a fully scheduled drum kiva, an expanded healing and wellness space, a new space next to the kids’ tent and toddler town called ‘Baby Lane.’ ”

Often regarded as a “musicians’ festival” that closes out a busy summer season of touring, the return of Harvest Gathering not surprisingly has been welcomed with open arms by performers from across the state.

Northern Michigan native and singer-songwriter Ben Traverse said he’s excited about “reconnecting with the land, music and community,” while Tai Drury of Harbor Springs’ The Marsupials calls it “one of the only events where musicians get to really hang out. It feels like a pilgrimage every year, as if we’ve survived yet another summer of pure chaos and must celebrate.”

Dan Rickabus, drummer for Michigan folk-rock band The Crane Wives, put it this way: “What I’m most looking forward to at Earthwork Harvest Gathering is this big-hearted community reuniting, gathering together again to co-create the unique magic of Harvest, which is not only celebratory and exuberant, but deeply healing and nurturing as well.” 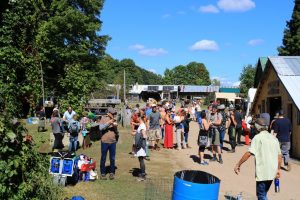 All of that reflects what Bernard has long intended for the annual celebration.

“It’s always been a family reunion for Michigan musicians, and one of our goals is to continue to cultivate a culture of cooperation and collaboration here in the Great Lakes Basin,” he said.

“(We want) to keep the event and the family farm going for many years to come, so we hope people contribute and we make it as affordable and accessible as possible, and that we have cultivated a culture of radical compassion and preemptive respect that people keep returning to and pouring into.”

Weekend passes are $140 for adults, $100 for teens. Day passes are $65. Get tickets and festival details online at earthworkharvestgathering.com.