After a year-long pandemic that nearly eliminated all live music, Local Spins asked its most experienced reviewers to recount their strangest concert escapades. We start with Tricia Boot Woolfenden. 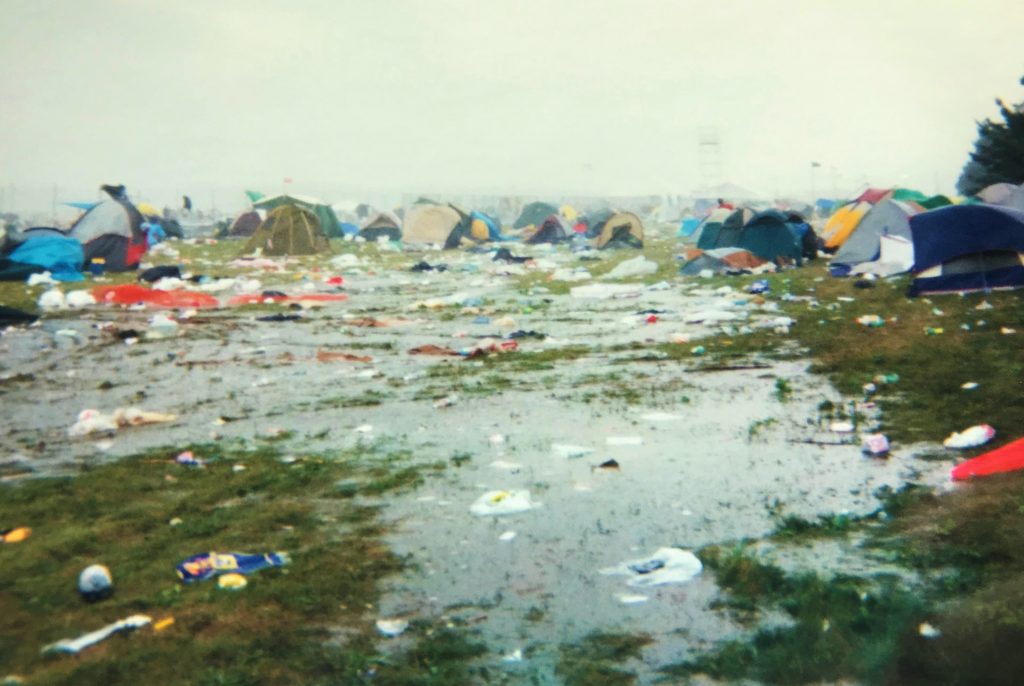 Woodstock ’99: Not everyone was lucky enough to experience this trash-laden debacle. Our heroine, Tricia, was. (Courtesy Photo)

EDITOR’S NOTE: It’s been a crazy, unprecedented year thanks to a pandemic that’s wiped out nearly all live music. So, in the interests of goofy (and often icky) nostalgia, we asked some of our most experienced reviewers to relive and recount their weirdest and most bizarre concert experiences for an audience desperate to recall something, anything when it comes to artists performing on a stage and fans doing, well, odd things. We start this mini-series with writer Tricia Boot Woolfenden, who’s survived some beyond-peculiar (mis)adventures.

There’s much I don’t miss about pre-pandemic life.

But topping the list of things I am desperate to get back to: Live music, in all its forms. Tightly packed clubs, bustling outdoor amphitheaters, massive stadium spectacles — I crave it all. 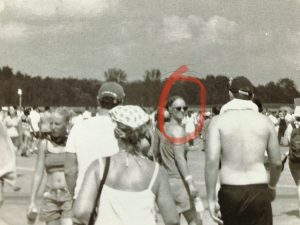 Sun-Baked Victim: Photographic proof that the writer was, indeed, at Woodstock ’99. (Courtesy Photo)

Not all concert experiences are created equal, of course.

While I’ve been lucky to have enjoyed dozens upon dozens of amazing musical performances over the past three decades, I’ve also attended my fair share of bizarre, chaotic and disastrous events over the years.

When tallying my most memorable-in-a-weird-way concert experiences, I eliminated any that were a result of my own poor planning or decision-making (hello, every alternative or classic rock concert at Pine Knob Music Theatre, circa 1996 to 1999), and instead focused on those where the artist, venue and/or audience were the culprit. Behold, three memorable times that had their moments, but I would not choose to re-live.

3. The Dandy Warhols, May 2001, Enmore Theater, Sydney, Australia – Picture it. It’s the early aughts. My hair is cut into an aggressively gelled pixie, I’ve got a closetful of skin-tight ringer T-shirts and a deep (and in retrospect, baffling) obsession with Courtney Taylor-Taylor. So imagine my delight when he and his merry band of druggie-alterna-rockers make their way through New South Wales while I happen to be studying in Wollongong, Australia. A once-in-a-lifetime opportunity to see one of my favorite bands in what was becoming my favorite place on Earth! 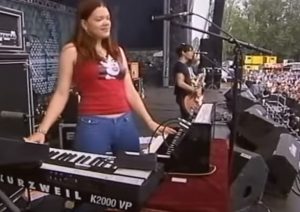 Unfortunately, the reality of the evening was less than transcendent. It was a weird show, and not in a fun “I didn’t expect a chorus line of unicorn costumes at the end” way. Rather it was more of a vibe of waiting to see who would be the first to throw a fist.

It’s hard to say who first killed the buzz, the audience or the band, but the atmosphere was…not cool. I’ve never seen an act perform with more disdain for the crowd and vice versa. The Dandies were slow to start songs and quick to abandon them, particularly when they received a positive response. They took a long cigarette break on-stage. It was agonizing and awkward.

For their part, the audience, which had gone overboard screaming out song titles, got progressively more angry and loud. And rude. Fully clothed keyboardist Zia McCabe — who occasionally performed topless back in the day — was the target of catcalls and requests to lose her shirt. (NOT OK, GUYS!!)

What stands out most about the evening isn’t a favorite song or being within feet of my musical crush, but rather the sweet sense of relief when it was all over. 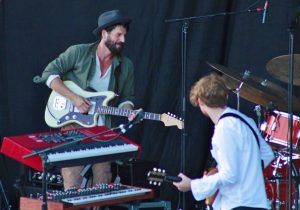 He Was Happy … At First: Then Ray Lamontagne fumed at Meijer Gardens fans talking over his set, threw down his guitar and stormed off stage. (Photo/Anna Sink)

Unlike so many of my musical misadventures — where the details are lost to time and my own faulty memory — I wrote about it in great detail for Local Spins.

Perhaps what is most notable about this very public meltdown and the performer-demanded ejection of some paying customers were the conversations that followed about concert etiquette, professionalism and how to not be a jerk. Bottom line: Don’t talk over the headliner and don’t puke all over fellow guests.

(Content/trigger warning: The following includes a brief mention of the sexual assault and violence committed at Woodstock ’99.)

I could easily provide thousands of words about the consumerist nightmare of poor planning, rampant misogyny and literal garbage that was the third iteration of this “peace, love and happiness” musical franchise, but the executive summary would simply read: Gross.

We’re not just talking the ick factor of such things as the RAW HUMAN SEWAGE that flooded the campsites and water stations. Or the overfilled portable toilets, of which there were far too few. Or the fact that the venue was a full-on SUPERFUND site. Or even the lack of affordable, potable water or sufficient infrastructure to answer the basic hygiene needs of 400,000 sun-baked, strung-out attendees. 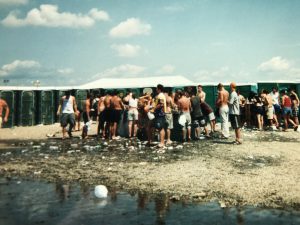 The Fun of Rampant Filth: Festivalgoers at Woodstock ’99. (Courtesy Photo)

How we all made it out of that unmitigated disaster without dying “The Oregon Trail”-style of dysentery is beyond me.

I’m almost certain the only thing that saved me from experiencing a waterborne illness was my time spent that summer working as a lifeguard at a public wavepool; I was already inoculated. As it stands, I picked up some bizarre, undiagnosable skin condition on my feet that plagued me for at least a year. It’s alllll that nastiness plus the ethos of capitalist greed coupled with white dude aggression, rage and violence. It was a bad scene, man.

The disastrous event re-entered public discourse in 2019 when plans for Woodstock 50 (thankfully) tanked before ever getting off the ground. The correct, popular response being, “What in the actual hell are you thinking.”

Woodstock ’99 walked so that the Fyre Festival could run. Both are shining examples of what happens when grifters plan a large-scale event with zero regard for the safety, comfort and well-being of a single person in attendance.bThe logistical failings, corporate plunder and violence of this Hindenburg of a music festival are well documented. My own experience was a mixed bag.

In one respect, it was an adventure; a liberating, multi-day road trip with two of my best friends, plus some additional friends made along the way. I anticipated a semi-cross-country excursion to a sure-to-be-legendary festival to see some quintessentially late-’90s acts such as Red Hot Chili Peppers, Rage Against the Machine and The Chemical Brothers. I selectively ignored the over-representation of aggro-rock and nu metal on the bill, and focused on what I *wanted* to see, both literally and metaphorically. Sure, there were less than a handful of female acts scheduled.

And yes, there were like, 16 bands who screamed about breaking sh*t, but–the Rusted Root! Send me on my way!

In spite of the many, many mishaps — a poorly planned and wholly unnecessary scheme to sneak in alcohol in empty shampoo and astringent bottles, someone taking a dirty diaper to the face during a heavy windstorm that stirred up mountains of garbage, a car that broke down twice on the return journey and a trip to the emergency room — we had fun. 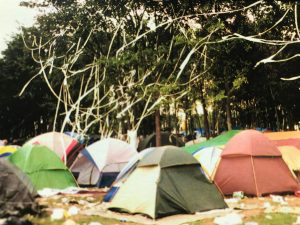 ‘Lord of the Flies’ Chaos: The Woodstock ’99 campsite. (Courtesy Photo)

We laughed. We made memories. We choked down vodka that tasted like Pantene while dancing to Fatboy Slim.

We burned under an unrelenting sun. We saw some good performances, even if my interest in most of those artists has long since waned over the years. We watched out for one another. We took care of each other. And that was probably the most important part of the equation.

When I reflect on that weird weekend 20-plus years later, my narrow memory of the event is marred by the toxic reality of the greater event itself, and a retrospective wish that I’d come equipped with pepper spray. The excitement of crowd-surfing to the stage during George Clinton’s Friday night set came at the price of having to fend off guys’ attempts to grope me and rip off my sandals as I made my way there.

The following day, my friend fought to keep dudes from tearing off her bra when she surfed the crowd during Counting Crows’ set. We wrote these experiences off as just “something that happens at concerts,” and we emerged relatively unscathed. The same cannot be said for many others. Our stories are but mild hints of the misogyny and assault committed during the mayhem seen on that decommissioned airfield.

We can marvel now at the egregiously priced pizza, dicey water supply, mountains of trash and human waste, misguided lineups, sun-scorched setting and complete and utter lack of oversight, but we should never forget how quickly some members of our society will gleefully descend into “Lord of the Flies” chaos when given half the opportunity.