Local Spins profiles the in-demand keyboard player who’s bolstered the likes of Joshua Davis, May Erlewine, Jack White and Larry McCray, not to mention Steppin’ In It, The Lash and more. Videos. 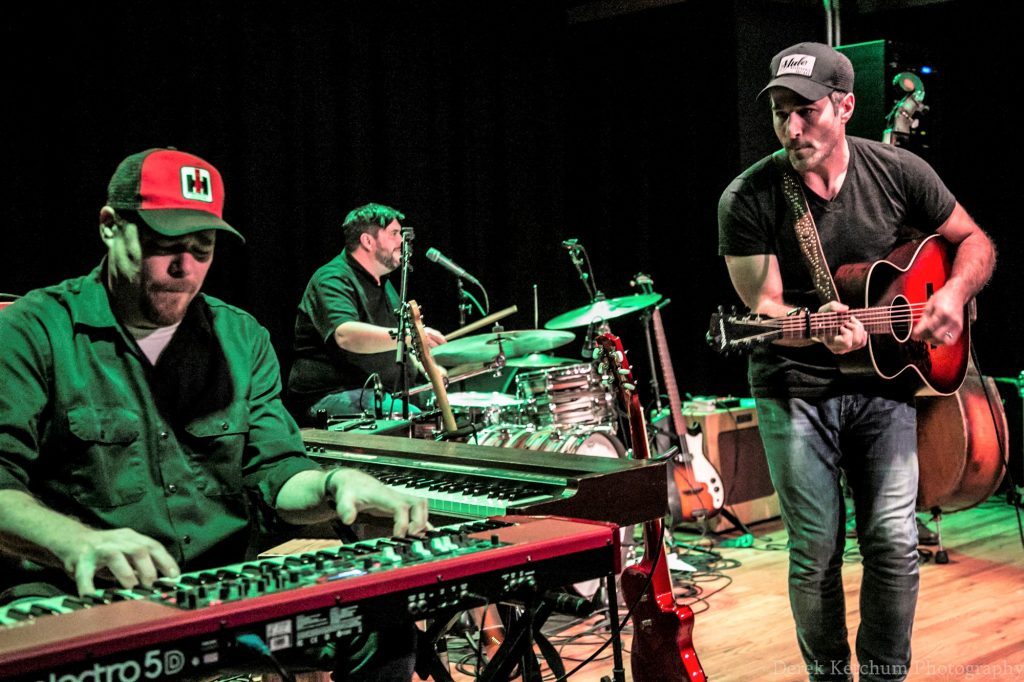 Paving the Way for Other Artists: Mike Lynch on stage with Joshua Davis. (Photo/Derek Ketchum)

If you’re heading out to see May Erlewine & The Motivations this weekend and the man on keys looks familiar, there’s good reason for that.

“Bars often get confused,” conceded Mike Lynch, affectionately known as ‘The Reverend.’ “Like at Otus Supply (in Ferndale, where the Motivations play Thursday night), I’ll show up with four or five different bands in a month, and they are like, ‘What the hell?’

“It’s hard for me to run it down with one band in one specific style of music, ya know? A (typical) week for me, I’ll be with a Cajun band one day and a funk band the next and a folk band after that, and that’s what keeps it exciting for me.” 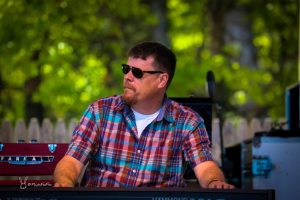 A veteran of famed Michigan acts The Lash and Steppin’ In it, and one of the most sought after hired set of hands in the state, Lynch has a CV chock full of legends and Rock and Roll Hall of Famers.

He’s recorded with the likes of Willie Nelson, Sheryl Crow and Neil Young, toured extensively with Larry McCray and worked with Jack White in the studio. And he’s performed routinely with Whitey Morgan & the 78s as well as Ty Stone, including opening on arena tours for Bob Seger and Kid Rock with those acts.

“A lot of it is because of the instrument I play,” he insists. “A lot of these groups, they don’t have a keyboard player in their band, but I’ll do their album, and when they have bigger gigs, they’ll hire me to reinforce their sound. And I play Hammonds and Leslies, and those things really make bands sound nice. They add a real fullness to a band’s sound.”

A FARM BOY WHO FELL IN LOVE WITH ACCORDIONS AND ORGANS

And when it comes to Hammond organs and Leslie speakers, Lynch — who is not really a reverend — spends much of his time fixing them, rebuilding them and customizing them. 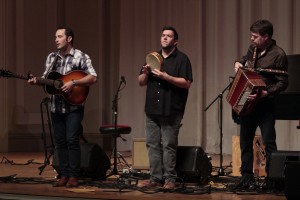 First Love: Lynch, on stage with Davis and Mike Shimmin, first picked up the accordion as a youngster. (Photo/Anna Sink)

“Growing up on a farm I knew how to break down an engine and rebuild it, and I was fascinated with Leslies early on because they are machines, and run on motors and belts and pulleys, so even when I was young, I messed around with those things.”

Residing in Lansing for as long as he can remember, Lynch was raised closer to the thumb on a dairy farm outside of Frankenmuth. It was there, as a youth, that he first fell in love with accordions. He still considers the accordion to be his main instrument, even if most people view him as an organist and pianist.

His older brothers turned him on to “what would today be considered classic rock” and “dragged him” to his first big concert to see Bob Seger in 1978. That’s when he fell for his second love.

“I saw that (Hammond) B3 and that Leslie amp and that piano and that was a huge influence on me,” he recalls. “I kind of had a moment (in 2015) when I did the Bob Seger show at the Palace of Auburn Hills when I looked up at their rig, and realized it was his music and the equipment that he used that was really the biggest influence on the stuff that I play.”

Lynch, 56, has cast his own shadow of influence.

A bit older than some of the Michigan acts he accompanies, it’s the wisdom that comes with that age that prompted northern Michigan artist and longtime Lynch cohort Joshua Davis to nickname him The Reverend a decade ago.

“It really just comes from him being a mentor. If there’s ever a problem, he’s the guy for me. He’s been such a stabilizing force in my life,” said Davis, joking that he’s still not sure how a Jewish guy came to call an Irish Catholic “The Reverend.” 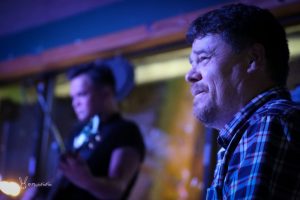 “Mike showed me that with a lot of hard work and determination and also just a good attitude, and being good to people, you can be successful. He kind of paved the way for me to think of music as an actual career.”

Lynch was indeed the first guy to truly give Davis a break, when he hired him to fill in for The Lash’s mandolin player Jason Portier for a big cross-country gig.

“When I first came to East Lansing in ’96, and first met Mike, The Lash were pretty much the rock stars of that area, and basically all of Michigan and the Midwest,” Davis recalls. “There would be a line out the door every time they played. Mike, he had this old badass ’60s white convertible and he’d drive around town in it. He was the f—ing man.

“I got to know him through open jams through (fellow Steppin In It alumni) Dominic (Davis) and Joe Wilson and when he had me fill in and flew me out to Portland to do North By Northwest when that was still a thing, for me that was a crazy thing. I was like, ‘You’re going to fly me somewhere to go play music? And put me up in a nice hotel?’”

ONE OF THE MICHIGAN SCENE’S ‘MOST ENCOURAGING, SUPPORTIVE MUSICIANS’

Lynch’s impact extends well beyond that.

Davis calls to mind a time a few years back when The Reverend got the call to open for Seger in Southern Ohio. It was the day before the two were supposed to play at a middle school in Cheboygan as part of the On Stage 4 Kids program. Davis gave him the out, but Lynch wouldn’t have it and drove through the night after his big arena gig and actually arrived at the school before Davis showed up at 8 a.m.

“He was bleary-eyed as hell, but that’s just the kind of guy he is,” Davis said. “He is going to give himself fully whether he is playing an arena or a cafetorium, and I know he would do it 100 times over.” 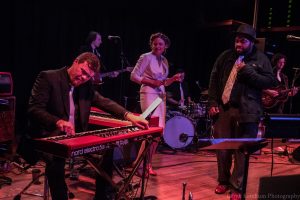 Earthwork Music songstress Erlewine, who plays with Lynch and an all-star cast of other Michigan artists at Bell’s Bewery in Kalamazoo on Friday and Seven Steps Up in Spring Lake on Saturday as part of her “Winter Dance Party” tour, has her own set of stories, musical and otherwise.

But what’s stuck with her the most is simply the way Lynch has pulled other musicians up by “doing the hard things that nobody else wants to do.”

“He’s like this uncle in the Michigan music scene, always looking out for everybody and making sure every one is OK, both musically and in their lives,” she said.

“When he sees someone struggling or someone who needs to be heard or needs support, he’s the guy who shows up and lends his music or his ear and lifts other artists up. He’s truly one of the most encouraging, supportive musicians that I’ve ever known.”

Of course, there’s also that sound.

“He keeps it simple, but it’s just absolutely gorgeous what he does,” Erlewine adds. “He knows how to pull the drawbars on that B3 like nobody I’ve ever heard.”

VIDEO: May Erlewine & The Motivations (with Mike Lynch)

VIDEO: Steppin’ In It