The Plainwell High School junior was this week’s guest for Local Spins on WYCE, which also debuted tracks by Brandino Extravaganza, Heavy Color and more. Learn more about Lowis; listen to the radio podcast. 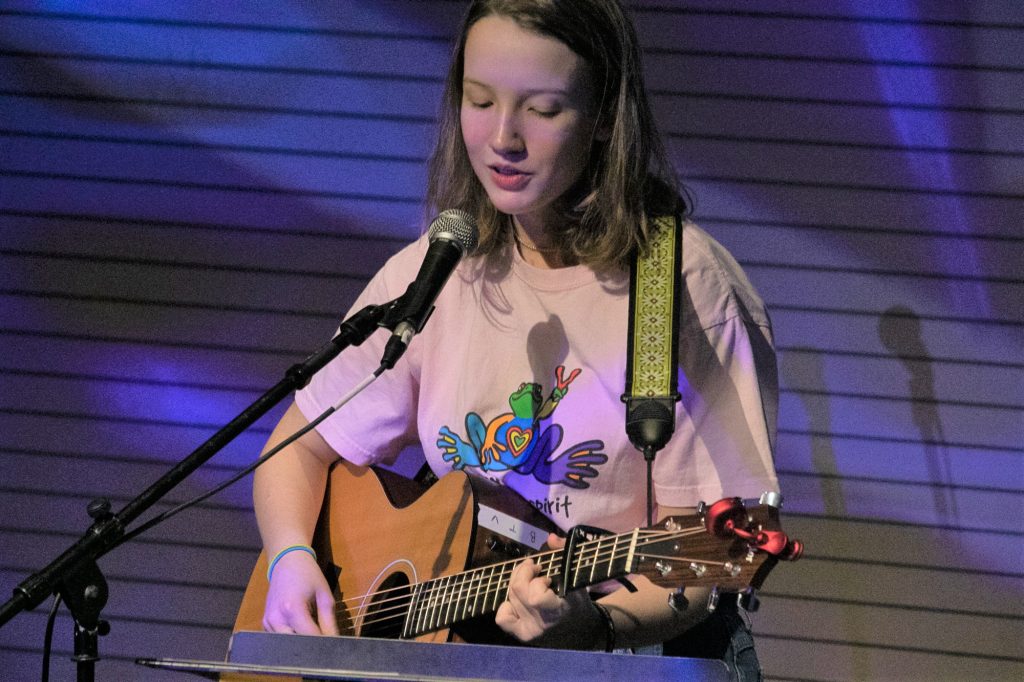 Music Is Just One of Her Passions: Lucy Lowis performing at the Fretboard Festival Play-In Contest. (Photo/Derek Ketchum)

In some ways, Lucy Lowis is a typical teenager, immersing herself in the usual student activities – and homework – as a junior at Plainwell High School.

In many other ways, she’s not.

For one thing, this 16-year-old actually loves math and science.

For another, she’s about to release her full-length studio debut album, jammed with indie-folk, singer-songwriter stories about “everyday life.” 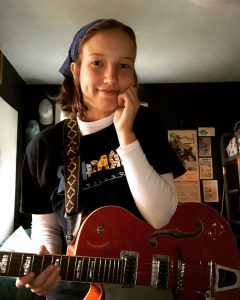 It’s the latest milestone for a young singer and guitarist who wrote her first song (about a ladybug) at age 7 and who’s performed regularly in front of audiences for several years, inspired in part by her “little girl idol” Taylor Swift.

“When I was just a toddler, I would go up and bang on the drums or play on the keyboards. It was just there for me to experiment with and I loved it. That’s kind of how my musical passion started,” said Lowis, whose father, Ted, is a veteran musician who recorded and produced the teen’s debut album, “Seventh Cycle Soul,” in his home studio.

“My dad has a lot of studio equipment that he’s accumulated over years of sound work. It (album) took us a little over a year working on and off.”

Growing up in Kalamazoo, Lowis became hooked on the stage since playing a third-grade talent show and now appears in high school musicals in addition to her solo performances. She also picked up the French horn but later gave it up in favor of the guitar, with a real penchant for writing personal songs.

“I just take a strong emotion that I experience in my life, whether it be sadness or love or any number of emotions, and I channel my feelings to create a song,” she explained, citing the music of Coldplay, Patsy Cline, Radiohead, The Black Keys and Tame Impala as current favorites.

“I kind of take it all in and output my own stuff. … My dad always says I have an old soul.”

For this week’s edition of Local Spins on WYCE, Lowis showcased two songs from the new album – “Safe Haven” and “You and Me” – while chatting about her music. Watch a video here of her performing the song, “Sunshine Girl,” at the Kalamazoo Fretboard Festival Play-In Contest earlier this year and scroll down to listen to the full radio show.

In addition to her father, Lowis leaned on the talents of drummer Eric Busch and bassist Dustin Lowe (of The Andrew Fisher Quartet) to enhance her studio project. 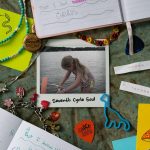 She will officially release “Seventh Cycle Soul” on Monday (Dec. 1), promoting the new album via social media instead of live performances due to the COVID-19 pandemic.

And while Lowis – who plays guitar, ukulele and piano – continues to write new music, don’t expect her to plunge into a full-time music career after high school. Instead, she has her eyes set on a career in the medical field.

“There’s a lot of things I want to do when I’m older,” she said, “and music is just part of that.”

In addition to Lowis, this week’s episode of Local Spins on WYCE – which spotlights local and regional music at 11 a.m. Friday on WYCE (88.1 FM) and online at wyce.org – featured the on-air debut of new tracks by Brandino Extravaganza, Tom Hymn (next week’s guest on the show), Oxford Fields, Kate Hinote Trio, Laura Rain & The Caesars, Heavy Color and The Andrew Fisher Quartet (the musician’s pick by Lowis) as well as music from Billy Strings and Asamu Johnson & The Associates of the Blues. Listen to the show here.