The well-regarded drummer who says he’s ‘addicted to getting better’ at his craft will be honored May 14 by the West Michigan Jazz Society. Read the Local Spins profile by Dutcher Snedeker. 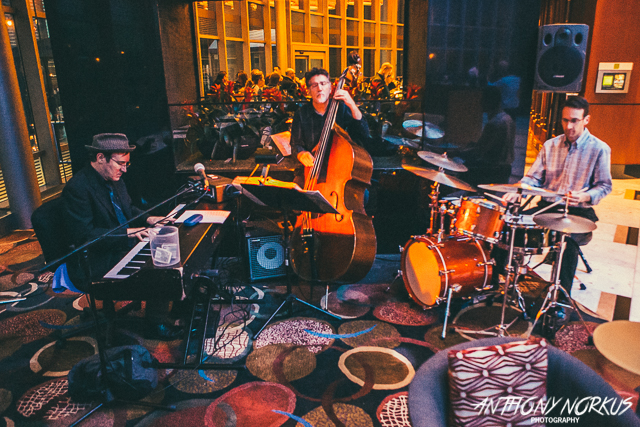 In his trio, the Grand Rapids percussionist has performed with a who’s who roster of regional stars and shared stages as a drummer-for-hire with a wide variety of acts, including Junior Valentine & The All Stars, Groove Merchant, DB & The Dinos, Karisa Wilson Band, Glenn Miller Orchestra, Beltline Big Band, Edye Evans Hyde and the Mike Frost Project.

He’s passed on his knowledge and love of music through teaching mostly piano and some drum lessons out of his home studio for the past 16 years.

And after decades as an in-demand musician, Knapp has recently added another endeavor to his ever-growing list of musical challenges: singing. 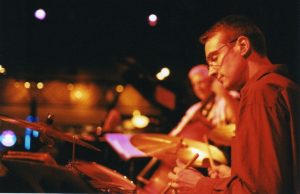 “In the last year, (pianist) John Shea talked me into singing again,” he said, “and I have been singing jazz standards at the drums, which has been a fun challenge and may lead to recording album with me singing in the future.”

It’s all part of what Knapp considers his “strong passion for creating music” while constantly pushing to improve his skill set and add to his toolbox.

Acknowledging his considerable contributions, the West Michigan Jazz Society has named Knapp the 2019 Musician of the Year, with a May 14 banquet at Noto’s Old World Italian Dining set to honor the drummer. (Scroll down for details, ticket information.)

After moving from Florida to West Michigan to attend college, Knapp has studied with some of the area’s great instructors on piano, drums and voice, including Quincy and Duane Davis, Billy Hart, Steve Zegree and Rupert Kettle.

Interestingly, Knapp didn’t really dive into the piano and drums until he was in college, starting piano at age 18 and drums at 21. He studied at Grand Rapids Community College for four years, performing in ensembles such as Shades of Blue led by his mentor Duane Davis. 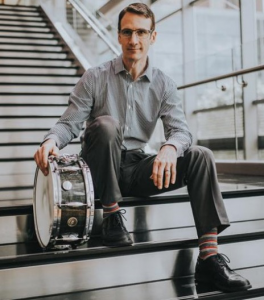 After transferring to Western Michigan University, he managed to carve out a schedule that allowed for private instruction with the late Steve Zegree and legendary drummer Billy Hart.

“My lessons with Billy Hart were definitely a highlight because you would only see him two or three times a semester. This made the time with him feel special, and because it could be a month or more between lessons, it forced you to be very self-disciplined. So, you had the myriad of things prepared to play for him that he expected to be ready,” recalled Knapp, who graduated from Western in 2002.

“It feels good to have the opportunity to pass along the knowledge of my mentors to my piano and drum students. Billy Hart always taught his drum students that we are the conductors in the band so I want to feel confident to lead in this regard.”

Years of performing as a pianist and drummer led him to teach and have regular work with a variety of artists and ensembles, including playing three nights a week with the John Shea Trio the past five years.

A COMPETITIVE DRIVE, LEADING HIS OWN TRIO, PERFORMING ACROSS THE STATE

Knapp, 45, also has joined the Grand Rapids Jazz Orchestra, Big Band Nouveau and Evidence Jazz Group in addition to performing around the state with a variety of artists and educators for concerts and workshops. 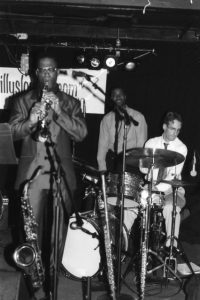 Always Seeking New Projects: Knapp has performed with dozens of artists and bands over the years. (Courtesy Photo Provided by Knapp)

The Fred Knapp Trio has released several albums over the years, including 2013’s “How Deep is the Ocean.” Recently, Knapp has focused on some projects with old friends while continuing to improve his own playing through hours of practice every week.

He recently performed with Third Coast Recording Company engineer and keyboardist-for-hire Joe Hettinga, saying that “we had a group together in college at WMU where we created a lot of original music. He’s an amazing musician and it would be fun to play with him more in the future.”

In addition to crafting new music in the studio, Knapp has his sights set on playing at a Midwest jazz festival within the next year.

Mirroring his dedication and interest in music and education, Knapp spends his time exploring hobbies and competitions with his son, Jaden, in chess, table tennis and other racket sports.

“Initially, my drive to get an education in music was that I didn’t have any real skills. I had a strong passion for creating music on the piano and wanted to know what I was doing and how to write it down,” he said.

“Over the years, the discipline and systematic approach it took to learn and perform music at a high level has transferred over to my hobbies. After thinking about it for a while I realize a large part of my drive is enjoying the feeling of improvement. I’m basically addicted to getting better at things and enjoy competition.”

Fred Knapp will be honored May 14 at the 2019 Musician of the Year Banquet hosted by the West Michigan Jazz Society at Noto’s Old World Italian Dining, 6600 28th St. SE, Grand Rapids. The John Shea Trio will perform that night. Happy hour begins at 6 p.m., dinner at 7 p.m. and dancing until 9:30 p.m. Tickets ($50 public or $45 for Jazz Society members) are available online or by mail; get details at wmichjazz.org. Music-only tickets ($20 public, $10 members) also are available. The deadline to register is midnight May 1.