The legendary ‘Queen of Rockabilly’ still gives it ‘110 percent,’ tours 10 months out of the year. Read the Local Spins interview with a singer idolized by Jack White who’s found a new generation of fans. 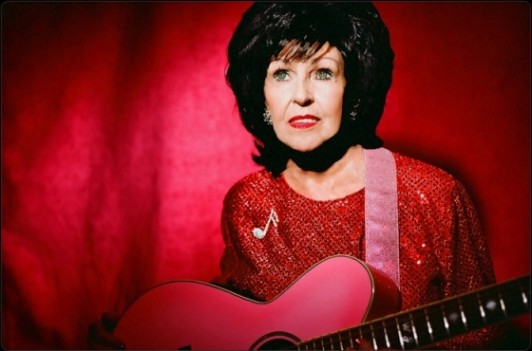 THE ARTIST: Wanda Jackson
THE MUSIC: Rockabilly, country, gospel
WHERE YOU CAN SEE HER: 8 p.m. Saturday at Wealthy Theatre in Grand Rapids, with Delilah DeWylde & The Lost Boys opening the show. Tickets are $25 advance, $30 day of show; doors open at 7 p.m.

Caught in the crossroads of a rapidly shifting culture and music scene, rockabilly seems like a small mark in music history, yet it was an integral step for American music, the sound of an era. 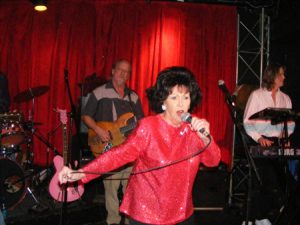 Giving It All in Live Shows: Wanda Jackson

So listening to a rockabilly song with the right tempo, instrumentation, voice inflection and lyrical content becomes a form of time travel – and few do that better than Wanda Jackson.

A pioneer during the early, ambiguous years of rock ’n’ roll, country and folk music, and commonly known as “The Queen of Rockabilly,” Jackson toured and held her own with the likes of Johnny Cash, Jerry Lee Lewis, Carl Perkins, Buddy Holly and Elvis.

“She proved that the gals could rock just as good as the guys,” said West Michigan’s Delilah DeWylde, who will open for Jackson on Saturday at Wealthy Theatre with her band Delilah DeWylde & The Lost Boys. “She has such a distinct voice that still sounds as good as it did in the ’50s. She is truly a remarkable performer.” (Get tickets online here.)

Indeed, Jackson has spent most of her life on the road performing.

At 77, she continues to tour 10 months out of the year, both in the United States and Europe, and though her career was at its height in the ’50s and ’60s, the rockabilly singer has recently enjoyed a resurgence of popularity due to younger generations discovering her music through various online platforms.

“The young people like the music I recorded in the ’50s, and I think it’s really neat,” Jackson told Local Spins during a recent phone interview. “I draw energy from the audience. Their enthusiasm goes a long way to help an artist.”

Growing up in Oklahoma, Jackson’s passion for music was cultivated by her father. A musician himself, Tom Robert Jackson bought his daughter her first guitar and encouraged her to play. 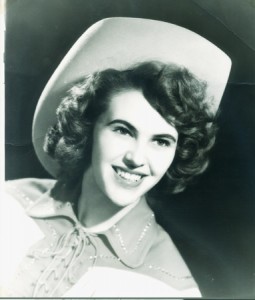 While still attending Capitol Hill High School in Oklahoma City, Jackson was discovered by country artist Hank Thompson, who heard the young vocalist singing on a local radio station. Jackson recorded and performed a handful of songs with Thompson’s band, The Brazos Brothers, and upon graduation began touring, often sharing the stage with a then-unknown Elvis Presley, and even dating The King for a brief time.

In the ’60s, Jackson started making a splash in the popular music scene with the top 40 hit, “Let’s Have a Party,” and in a parallel fashion, began establishing herself as a country artist, with the songs, “Right or Wrong,” a No. 9 hit, and “In the Middle of a Heartache,” which charted at No. 6.

In 1963, Jackson recorded and released the album, “Two Sides of Wanda,” which featured tracks from her rock ’n’ roll/rockabilly persona on one side of the record, and country numbers on the other, earning her a Grammy nomination for best female country vocal performance.

In light of the declining popularity of rockabilly, Jackson started to focus more on traditional country, releasing two singles that made the Top 20 on country charts, “Tears Will Be the Chaser for Your Wine” and “The Box it Came In.”

In the early 1970s, Jackson converted to Christianity, recording and releasing a slew of gospel songs in conjunction with a number of small, religious labels, before returning to her rockabilly roots in the ’80s and ’90s. 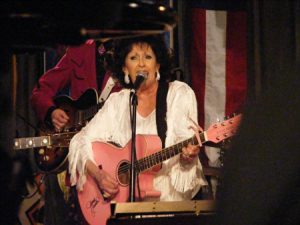 Glamorous and Relevant: Jackson on guitar.

In 2009, she was inducted into the Rock and Roll Hall of Fame as an early influence, and more recently, collaborated with Detroit rocker Jack White. White produced and played guitar on Jackson’s 2011 album, “The Party Ain’t Over.” The pair also performed alongside each other for a music video of “Thunder on The Mountain” and for performances on the “Late Show With David Letterman” and “Conan.”

For her Grand Rapids concert on Saturday, Jackson said attendees can expect a career- and genre-spanning set, and incessant effort.

“I still do the songs as near to the original record as possible,” she said. “One thing I know is that I’ll give 110 percent. I show up and I give my very best. They don’t have to worry about me being a no-show, or in no shape to sing. That’s not gonna happen. People always have a good time.”

“She is important for showing the world you can keep touring into your 70s,” said DeWylde, “and stay glamorous and relevant.”

Saturday’s show is presented by the Tip Top Deluxe Bar & Grill; get tickets and details online at grcmc.org.