The second video in the Elevator a GoGo series features a Nashville Americana act. And Grand Rapids’ Vintage Parlor Orchestra used a garage as the setting for a unique social-distanced performance video. 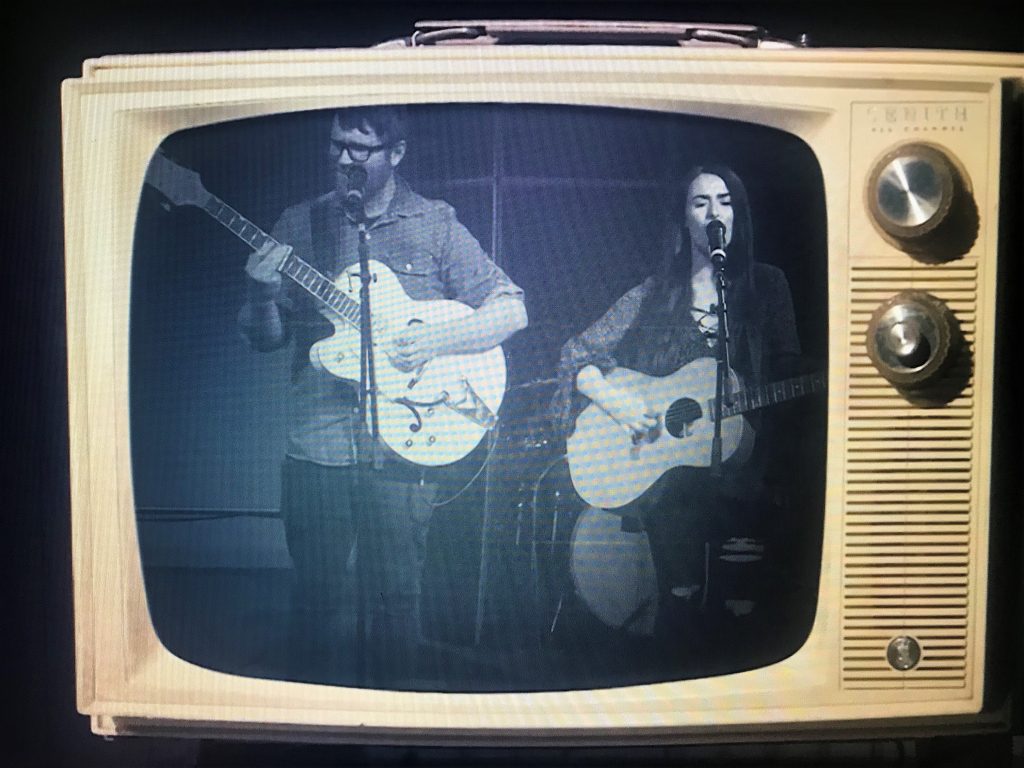 Elevator a GoGo TV: The Young Fables in the new video released today.

Round 2 of Grand Rapids’ Elevator a GoGo got inventive – in vintage fashion – with a video featuring a Tennesseee-based Americana duo.

The new video series spearheaded by Big Event Studios and Kevin Matthews, and staged in an old Grand Rapids freight elevator, was set to feature a performance by The Young Fables who were touring West Michigan in April.

But when the coronavirus pandemic forced a rescheduling of the tour to September, producer Robert Neumann and cinematographer Jeremiah Johnson of Big Event Studios came up with Plan B: 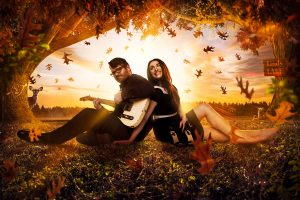 Returning to West Michigan in the Fall: The Young Fables (Courtesy Photo)

They transformed footage of the song “Holdin’ On” provided by the Nashville duo of Laurel Wright and Wesley Lunsford to make it look like an old B&W television broadcast inside the freight elevator.

“Jeremiah and I came up with a new intro so we could use footage that the Fables provided and present it from the elevator,” said Neumann. “This made the edit a bit more challenging but also fun.”

The striking video features Wright’s impressive vocals. “You can’t take a voice for granted,” said audio engineer Bob VanProyen of RSVP Audio. “Laurel has a beautiful low end to her voice, not bass, but the low end of a soprano.”

In addition to Neumann, Johnson and VanProyen, the video features audio engineering by Colton Carnley of Knoxville’s CX3 Music and theme music by Trevor Menear, with marketing, promotion and voiceover by Matthews.

The Elevator a GoGo video premieres today here at Local Spins, with Neumann insisting the duo would join the series again in the fall for an honest-to-goodness elevator performance. View the video here and check out Session 1 of Elevator a GoGo featuring West Michigan singer Bobby Haggard. Bands interested in participating in the series can email Matthews at elevatoragogo@gmail.com.

VIDEO: The Young Fables, “Holdin’ On” (Elevator a GoGo)

Elevator a GoGo Featuring The Young Fables Holdin' On from BIG EVENT STUDIOS on Vimeo.

So the conductor of the Grand Rapids-based orchestra — a 24- to 50-piece group of musicians which has earned attention for playing in breweries and other “non-traditional” venues — recently assembled eight musicians and a singer in his garage for what turned out to be a fetching movement of Antonio Vivaldi’s “String Sinfonia in D minor.” 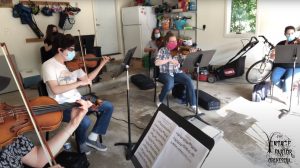 Pike captured the performance on video, with some of his neighbors treated to what’s become a rare live concert during the COVID-19 shutdown as musicians performed while wearing face masks.

“We had seven strings, one conductor, a bassoonist and Emily Smith came by and sang a haunting Vivaldi aria while a lawnmower raged in the distance. It was surreal,” he said.

“I am the cameraman. I used footage from three cameras, audio from my new Zoom H4N and taught myself video editing. A lot of that gear was funded by the money raised from our first two videos. I’m cautiously hopeful, but VPO is alive and well, and this forced adaptation I think has brought the best out of the project.”

Check out the video here and read more about the orchestra in this Local Spins feature story.