Performing in breweries and non-traditional venues, the unusual West Michigan chamber orchestra is on a mission to reinvent the classical music concert experience. The back story, with videos. 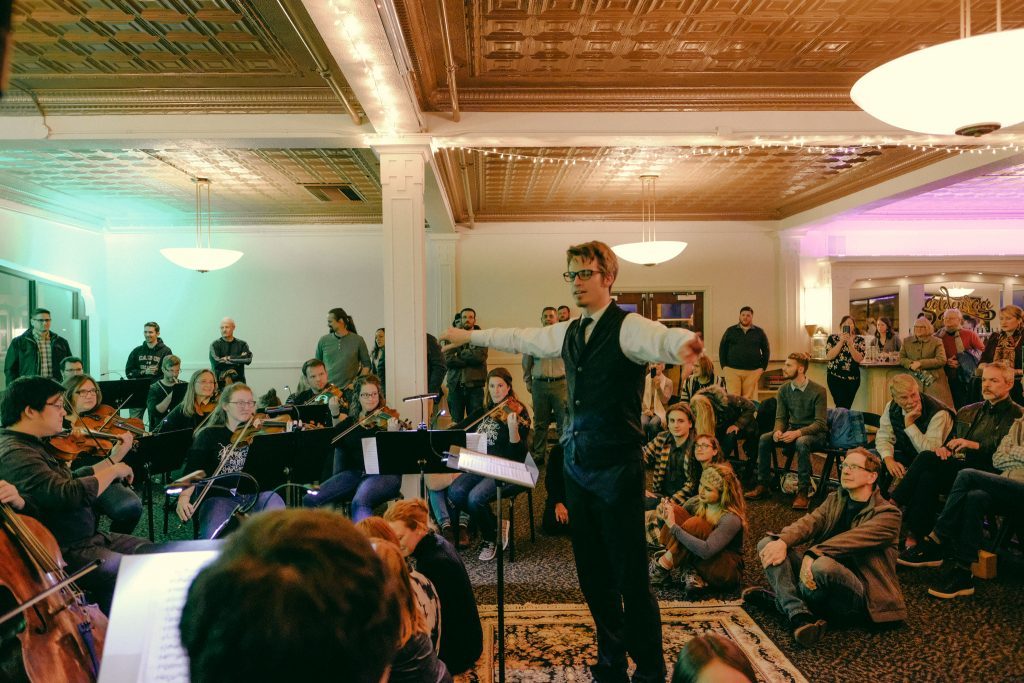 As a vehicle to bridge the gap between “the orchestra world and the rock band world,” Grand Rapids’ Vintage Parlor Orchestra may be perfectly labeled – reviving the rowdiness of pre-1900s orchestral performances while embracing the timeless power of centuries-old classics.

“I’m a disgruntled classical music audience member turned conductor,” said Thomas Pike, 35, music director for the VPO, described as “a nomadic classical music ensemble” whose membership varies depending on the venue and event.

“I want to go to The Pyramid Scheme and see someone melt faces with a Shostakovich String Quartet, and then follow it with a set from Charles the Osprey. Nobody was making a concerted effort to get classical music out of the concert halls. So I did.” 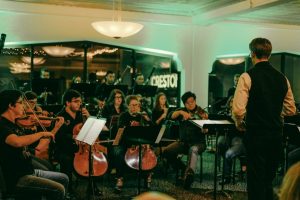 Formed in late 2018, the group “has been shaped by over 50 incredibly talented and dedicated local classical musicians” with performances of symphonies and concertos taking place at Founders Brewing, Creston Brewery, Nomad Gallery and other West Michigan venues.

At 7 p.m. Sunday, the VPO will play Listening Room with guests the Folias Duo and West Michigan New Music Collective. It’s the VPO’s debut at the 200-capacity venue in Studio Park, just south of Van Andel Arena. Tickets are $10; get more information and tickets online at listeningroomgr.com.

“Our focus is to reinvent and revitalize the way this music is presented, and to provide an accessible experience to everyone,” said Pike, of Grandville, a repair shop administrator for Meyer Music.

“Each concert brings new potential and experimentation. A popular feature of our concerts has been inviting the audience to sit as close as they want to the musicians, with some sitting inside the group and directly in front of the conductor. There are jokes, raffle prizes, audience interaction, musical improvisations, and as little formality as possible.

“We are designed to bring this music into places it’s never been, and have made a great amount of progress in a little over a year. Our concerts are more of a ‘show’ than recitals of museum pieces. Orchestral audiences before the 1900s were far rowdier and more involved in the music making than the silent, well-behaved audience we expect today.”

As the VPO conductor and music director, Pike handles the lion’s share of concert preparations, from choosing venues and settling on the instrumentation needed to handling ticket sales and the stage set-up. He stressed that his personnel manager, Kaitlyn Jonkman, also does “incredible work” for the VPO.

Scores for the concerts are culled from the IMSLP Petrucci Music Library website, with Pike occasionally rearranging or re-orchestrating the pieces “to fit a smaller ensemble.” 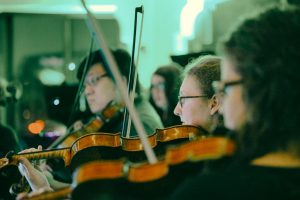 Although membership varies, the concerts – held about five times a year – usually feature about 30 musicians. (Sunday’s Listening Room concert will feature 24 musicians, some spilling off the stage with help from extra risers and a podium.)

So, scheduling performances for the VPO, which rehearses at various locations including the community center of Timber Ridge Apartments in Grandville, can be a challenge.

“For an orchestra running off the stamina of one guy in his basement on his spare time, it’s a bloody miracle,” conceded Pike, who stores 30 musicians’ chairs and music stands in his basement and borrows his dad’s truck to haul the gear to rehearsals.

The VPO is supported by corporate sponsors Meyer Music and Buist Electric, as well as individual donations.

Despite the obstacles, Pike revels in the whole VPO experience.

“Simply put, this is my lifelong dream come true. Conducting an orchestra is intoxicating, and once you’ve been in front of 30 incredibly talented musicians giving it their all in the moment, you just keep chasing it,” he said. 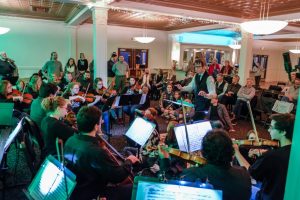 Timeless Music: Performed for fans with beers in their hands. (Courtesy Photo)

“The music. My god, the music. It is timeless, and I just want everyone to hear it with a drink in their hands.”

Perhaps more important, those audiences with drinks in their hands have welcomed this approach to classical music – an approach that actually encourages concertgoers to take photos, move around, get a beer during performances.

“Classical music needs a new avenue to reach people,” Pike said. “We’ve struck a nerve with so many people that want to experience this music in new ways. If you look at the archive photos of our Creston (Brewery) show, everyone is smiling.

“It’s what I’ve always wanted in a concert experience, and apparently I’m not alone. It’s new and awkward, but in a really good ‘Let’s experiment’ way.”

In addition to Sunday’s Listening Room concert, the Vintage Parlor Orchestra will play the Golden Age on the second floor of Creston Brewery on April 28 and 30.