Members of the Michigan band stopped at WYCE as part of a CD-release tour that touts new songs with Celtic, rock, classical, bluegrass and pop hues. The November 2016 show also debuted new music from Jesse Ray & The Carolina Catfish, Lapdogs, Conrad Shock & The Noise and more. 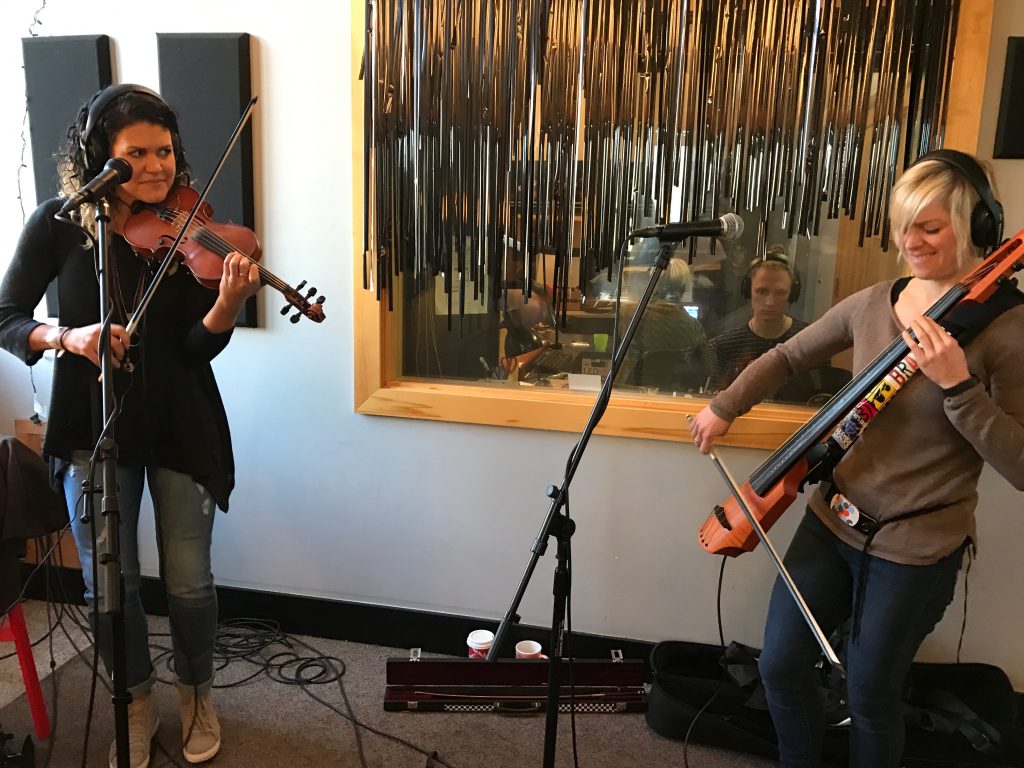 Where Their Hearts Are: Diana Ladio and Alison Lynn performing during Local Spins on WYCE. (Photo/Local Spins)

THE BAND: The Moxie Strings
THE MUSIC: Contemporary string music
WHERE YOU CAN SEE THE BAND: 7:30 p.m. Thursday (Dec. 6) at Wealthy Theatre in Grand Rapids (with Brian Oberlin); get tickets online here.

Taking off the shackles.

That’s the way The Moxie Strings view the freedom they’ve felt as a “contemporary string” trio which has been willing to push boundaries, blend genres and otherwise step outside the Celtic fiddle band label in recent years.

(Check out a review of the band’s third full-length studio album to the right.)

“We were lucky to be welcomed in and be part of it,” Ladio says of the Irish fiddle community that The Moxie Strings first embraced years ago.

“The fiddle route was something that was really fulfilling at the time, but then we started to realize was that we really enjoyed listening to a lot of other different types of things.

“This (new album) is a very good representation of all the types of music that all of us like as done by strings. It’s calling on a lot of different influences, that’s for sure.”

Added Lynn: “You do hear a lot of heavy rock on the album. That would be a lot of my influence, that I come in and say I want to sound like Metallica. How do we make that happen? We work very well together as a duo and a trio to get a product that accurately makes that happen.”

Ladio and Lynn, who’ve performed together for more than a decade and who also conduct regular education sessions at Michigan schools, displayed the fresh, eclectic nature of the band’s approach during this week’s edition of Local Spins on WYCE.

They stopped by the studios of WYCE-FM in Grand Rapids to chat about their new project perform the new songs “Eileen” and “Go In Beauty.” Listen to the podcast below, with a video of their duo version of “Eileen” here.

As Ladio puts it, the violin and cello “are in no way limited” to classical and traditional uses, even though all three band members have had extensive classical training. The trio’s more expansive musical direction is “where our hearts were,” she added, noting all three musicians are willing to experiment with new sounds and styles. 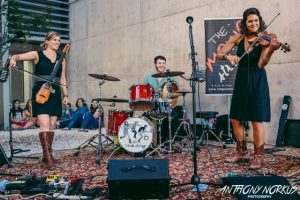 “Music is just one big awesome thing and it should never be separate,” she insists. “There are no labels here.”

The band views its direction as part of an open-minded “cool new movement” where traditional instruments find their way into pop and mainstream music and vice versa.

“There’s a cool young synergy happening across the board,” says Ladio. “Let’s just celebrate the fact that it sounds and feels good right then.”

This week’s edition of Local Spins on WYCE also featured the debut of new music by Jesse Ray & The Carolina Catfish, Conrad Shock & The Noise, Lapdogs and Bello Spark, plus songs from Valentiger, Annabelle Road (this week’s musicians’ pick), The Soil & The Sun and Hannah Rose & The GravesTones. Listen to the full podcast here.

PODCAST: Local Spins on WYCE with The Moxie Strings