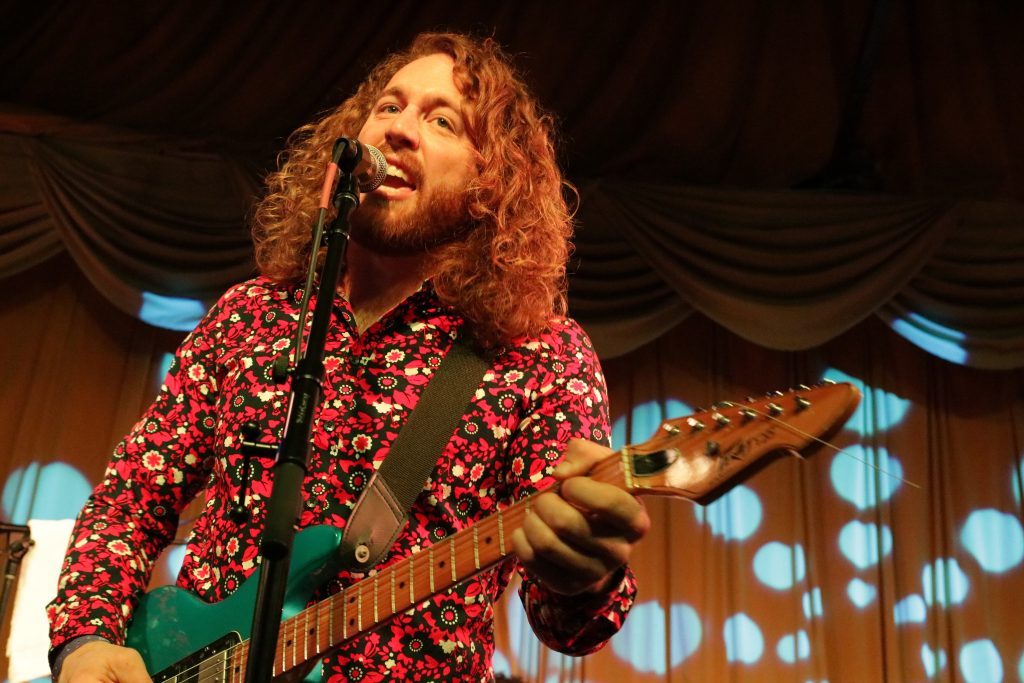 Eager for the ‘Genuine Excitement’ of a Live Performance: Joe Bockehim of The Legal Immigrants. (Photo/Anna Sink)

The Legal Immigrants wrapped up their latest studio album way back in January, representing more than two years of “chipping away at it.”

Since then, the COVID-19 pandemic has swept the country and two longtime members of the Grand Rapids rock band have departed.

\With the coronavirus mostly silencing concerts in 2020, frontman Joe “Boots” Bockheim said he’s not about to release that long-awaited new collection of tunes until the group can mount a proper tour in front of live audiences.

“We’ll get it done and out when we can have concerts,” Bockheim reasoned. “I like talking to the people. I like the genuine excitement of promoting a release party – all the stuff we used to do in the old world.”

It’s not a release party, but The Legal Immigrants will finally, at least, get a chance to rev up a live audience Saturday during the band’s first Grand Rapids show in nine months.

The Belknap Drive-In concert starring The Legal Immigrants with opening act Melophobix kicks off at 7 p.m. Saturday at Grand Rapids’ Belknap Park. Tickets are $60 per vehicle (plus a $7.01 service fee) and available online here.

(The show follows Friday night’s first Belknap Drive-In affair – a sold-out double bill with Joe Hertler & The Rainbow Seeker and Desmond Jones. Return to Local Spins on Saturday for coverage of that concert.)

“The emotions that are going to be released on Saturday, it’s going to be monumental,” Bockheim conceded, noting that live-stream performances during the pandemic just haven’t measured up to in-person shows. “There are so many different story lines.”

Indeed, there are – from celebrating the arrival of autumn to unleashing a big homecoming celebration to debuting The Legal Immigrants’ new lineup.

EXCITED ABOUT ‘THE NEW DIRECTION OF THE BAND’

It makes for a bittersweet, yet exhilarating transition.

“It’s kind of sad in that aspect,” Bockheim said, noting the upcoming new album “bookends” with the 2016 release, “Panacea” – representing the five-year period that this lineup was together. 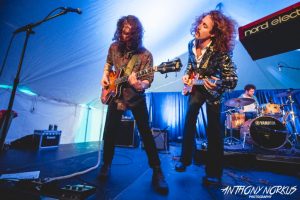 Loving the Stage: The Legal Immigrants during a 2019 performance. (Photo/Anthony Norkus)

“We toured the world together, we spent so much time together. We were four wildly different people that had this nucleus, these songs that brought us together.”

On the flip side, Bockheim said he’s “really excited about the new direction of the band. It’s not like we’re going to be regressing.”

He noted the group did get a chance to knock “a little rust off” at an Indianapolis show last month and he’s also pumped up about debuting songs from the as-yet-untitled new album. (Scroll down to listen to the on-air premiere of two of those new songs – “Smokey Mountain” and “Late Night Menu” – plus an interview with Bockheim in this week’s edition of Local Spins on WYCE.)

“The new record is all over the place stylistically, keeping with the ‘something for everyone, everything for some’ vibe,” he suggested, noting that he embraces everything from rock to funk to country.

“For me, to keep my attention, whatever pops out and sounds fun is the path I’m going down. I like all the variables in music. I love so much different stuff and I try to just make my own of that, whatever that may be.”

This weekend, The Legal Immigrants plan to have a ton of fun in their return to the stage amid a year that’s challenged and upset musicians unable to showcase their craft.

“All of that has been robbed of us,” Bockheim said, noting it’s been difficult to “maintain some level of motivation because it’s so depressing.”

As for playing a live show again? “Elated is a word I would use.”

In addition to the Bockheim interview and new Legal Immigrants songs, this week’s edition of Local Spins on WYCE — which spotlights Michigan music at 11 a.m. Fridays on WYCE (88.1 FM) and online at wyce.org — boasted the on-air debut of new tracks by The War and Treaty, Jack Droppers & The Best Intentions, Bird Flight, Jake Allen, John Davey, Julianne Ankley, Laura Rain & The Caesars and Shawn Butzin, as well as a song from Melophobix, this week’s musician’s pick by Bockheim. Listen to the podcast of this week’s radio show here.