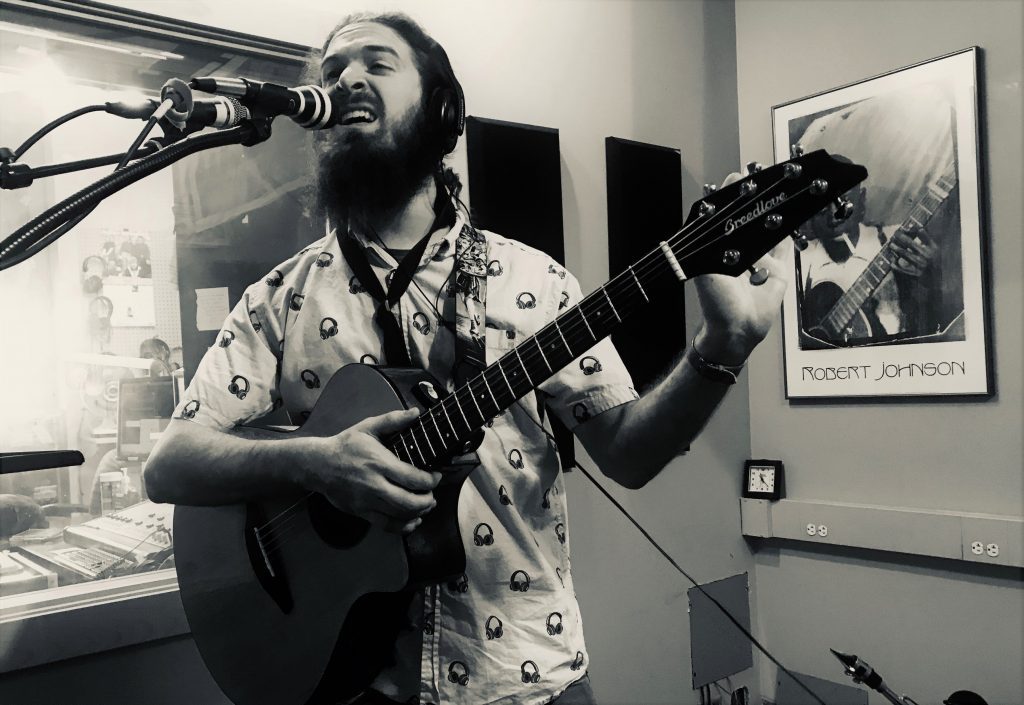 Name Change for an ‘Extravagant’ Project: Brandon Proch, aka The Brandino Extravagana, at WYCE. (Photo/Local Spins)

Grand Rapids musician Brandon Proch calls it a “tap-dancing game” – the deft footwork required to activate an arsenal of floor pedals and create the instrument looping magic that gives his genre-spanning songs a full-ensemble feel during live performances.

And now, as he quits his day job to pursue music full time, that tap-dance routine and more will take place under the name “The Brandino Extravaganza,” a change from the El Brandino moniker he’s worked under in recent years.

As he puts it, the El Brandino label was never intentional, “just kind of an arbitrary name that I threw on a Facebook page” but one that ended up sticking as he started performing and creating music. Still, he was never comfortable with the name. 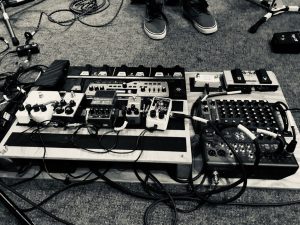 Pedal Tap Dance: The tools of the trade. (Photo/Local Spins)

Now, as a one-man band and looping wizard – and as a musician who brings in other players for full-band performances – he will be henceforth known at The Brandino Extravagana, speaking not only to his instrument-juggling approach but his occasional full-band shows, like the one taking place at Founders Brewing Co. in Grand Rapids on June 27.

Mostly, though, he’ll continue to perform solo as “a full-on one-man-band” armed with a guitar, saxophone and all those looping and effects pedals – something he demonstrated during this week’s edition of Local Spins on WYCE. Watch a video of his performance here, with the full radio show podcast below.

“The idea is that it’s still an ‘extravagant’ one-man-band, but with the ambiguity and option left open for full band scenarios and anything in between,” Proch said of the new name for his “upbeat, folky, funky” music.

“The first Extravaganza show, however, will indeed be a full-band evening, with Devin Anderson (United Everywhere, Kickball Forever) on guitar, Stefan Schwartz (Melophobix) on bass, Adam Parada (Melophobix) on keys and Brad Harris (Funkle Jesse) on drums, and will feature a plethora of very exciting guest appearances throughout the evening.” 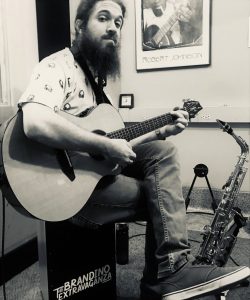 But that’s not the only place fans will get to see him play. He’s a member of the Funkle Jesse cover band that performs regularly across West Michigan as well as Founders Brewing Co.’s FBC All-Stars which will perform June 22 as part of Founders Fest. And Proch recently joined May Erlewine & The Motivations to play saxophone during the band’s recent show at Frederik Meijer Gardens & Sculpture Park.

Proch’s love of music began at a young age, acquiring his first guitar at age 11 and starting his first band at 12. His group made its debut by playing Less Than Jake and Relient K songs at an eighth-grade talent show.

“Once you as an eighth-grader have stepped up in front of a thousand middle-schoolers, who are like maybe the most judgmental people, you’re never nervous again after that,” he said. “I got it all out of the way, first show. It was smooth smiling from there.”

He plans “definitely put out some new material” later this year as The Brandino Extravaganza, after crafting “four or five new tunes that I think are the best I’ve done.”

He performs at Festival at 4 p.m. Friday (June 7) on the Pearl PopUp Stage on the corner or Pearl Street and Ottawa Avenue. He follows that by playing the Ludington Pub in Ludington at 6 p.m. Sunday.

The June 7 edition of Local Spins on WYCE – which showcases local and regional music at 11 a.m. Fridays on WYCE 88.1 FM – also boasted the debut of new tracks by Cold Mountain Child, Desmond Jones, Von Kaiser and James Reeser & The Backseat Drivers, along with music from The JetBeats, The Hacky Turtles, KJ & The Good Time Family Band, Greensky Bluegrass, Hollywood Makeout and Conrad Shock + The Noise. Listen to the full radio show here.