The Traverse City alt-folk band brings its tour behind “Vessel” to Grand Rapids and other Michigan cities this week. See what concertgoers can expect and view the latest Hot Top 5 chart. Amping Up the Energy: The Accidentals aim to create an immersive experience for concertgoers. (Photo/Anna Sink)

Calling it a “roller coaster of emotions” that amounts to “a big family reunion every night,” the kickoff to The Accidentals’ tour behind a much-talked-about new studio album has been nothing if not inspiring and energizing for the band.

“Every time we play a show, there are moments where we’re all holding back tears from the relief of being able to get back to doing what we love with the people we love,” Katie Larson told Local Spins after Sunday’s concert in Cleveland, the fourth show on the Traverse City band’s album-release tour for “Vessel.”

“That exchange of energy and emotion is real and it’s healing and it feels amazing to experience that after so many months of the void on the other end of a live-stream.”

With Grand Rapids multi-instrumentalist Patty PerShayla joining the band on stage and 2015’s winner of “The Voice,” Sawyer Fredericks, opening the shows, bandmate Sav Buist said “the team feels right” for a long-awaited fall tour. That tour crisscrosses the eastern half of the United States, with a Grand Rapids stop Saturday (Oct. 9) at Calvin University’s Covenant Fine Arts Center. Tickets to the 8 p.m. show are $20, available online here. Four of the albums are new to the Hot Top 5.

“The audiences have been like a big family reunion every night. We’re feeling the love,” said Buist, noting the band had time “to really be authentic” with the new album and bring that spirit to the stage.

Officially released Oct. 1, the album and advance singles already have created a buzz for the alt-folk band that also features Michael Dause on drums: “Vessel” shot straight to No. 1 on the Local Spins Hot Top 5 Chart for September, denoting the local or regional release receiving the most radio airplay at Grand Rapids’ WYCE (88.1 FM).

“It’s hard to put into words how it feels to hear our songs on the radio. It’s huge. Ten years ago, WYCE was the first station to play our music and we will never forget hearing it on the radio for the first time. It feels like we’ve come full circle with this album,” said Buist, noting that radio airplay “gives us a platform to see what resonates with people” in terms of tracks on the new album.

“Stations like WYCE level the playing field and give indy music a voice.”

Four of the five albums for September are new to the chart: Billy Strings’ “Renewal” entered the chart at No. 3, followed by instrumentalist Laurel Premo’s new solo album, “Golden Loam,” at No. 4 and Grand Rapids jam band Desmond Jones’ “Why Not?” at No. 5. Michigan Rattlers’ “That Kind of Life” dropped from the top spot in August to No. 2 in September.

It’s actually the second time this year that The Accidentals have snagged the No. 1 spot on the Local Spins Hot Top 5 Chart: The band’s “Time Out: Session No. 1” EP featuring collaborations with other songwriters topped the chart in May.

‘PUSHING THE BOUNDARIES’ WITH A BIG BOOST FROM PATTY PERSHAYLA

That Michigan fan base has helped rev up excitement for the band’s home-state shows, Buist said.

“I think they’re surprised that we’ve amped up the energy with this show. There are quiet moments for sure, but it’s a rocker,” she said. “The lights, the banners, the addition of Patty PerShayla (electric guitar, bass, octave mandolin, ukulele) really frees us up to create a full show the way the music was intended.

“We’re lucky to have a solid base of music lovers. They don’t mind that we step out of the box. … They’re usually encouraging us to keep pushing the boundaries. They love the pop melodies as much as the Americana and they’re digging the punk energy of the live show.”

Larson added that the trio has bonded quickly with PerShayla and Fredericks, which bodes well for the fall tour. 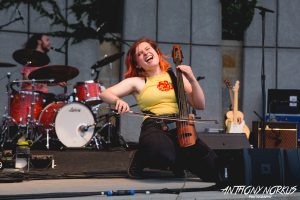 ‘A Rocker’ of a Show: Katie Larson on stage at Meijer Gardens in July. (Photo/Anthony Norkus)

“Adding Patty has made the music seamless,” she said, noting PerShayla learned 25 songs in two months while also fronting her own rock band, The Mayhaps.

“We’ve all become really tight even in this short amount of time, not just on stage, but in the van as well. This tour is going to be an absolutely blast with her.”

The band also plays The Mendel Center at Lake Michigan College in Benton Harbor on Oct. 13.

“Grand Rapids is really our biggest base,” Buist conceded. “Most of our Patreon (fan subscriber platform) base is there as well. So, we’re looking forward to the Calvin show and seeing everyone and being surrounded by that feeling of coming home.”

That means fans can expect a robust homecoming spectacle.

“When we put together a show the goal is to create an experience for the listener. So, we try to build a set that is emotional: We want the audience to laugh with us, cry with us, and wish the night didn’t end,” Buist said.

“The set is written to take people on that journey with us, to connect us in the way only music can. We’re bringing everything we’ve got. They can expect to feel something. We’re not holding back. We’re just leaving it all on the stage every night.”