The Big Game is tonight. But which city has the best music in the rock era? Compare and listen to the Top 10 artists and their songs from San Francisco and K.C., and judge for yourself which city comes out on top. 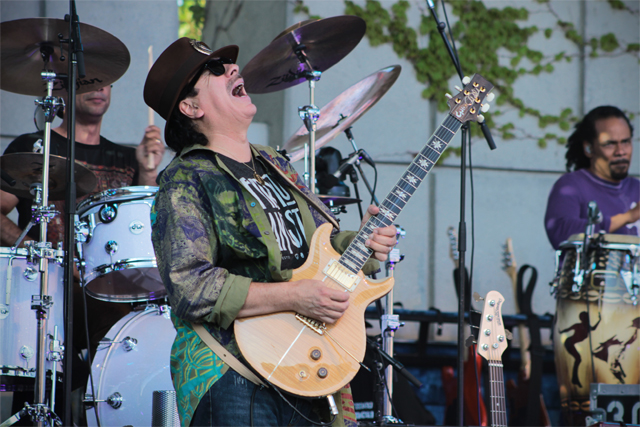 One of San Francisco’s Finest: Santana, shown here at Meijer Gardens in 2014, ranks high in the Top 10. (Photo/Anna Sink)

With the San Francisco 49ers facing off against the Kansas City Chiefs in Super Bowl LIV tonight, Local Spins figured it was a good excuse to see which city would come up victorious in a battle of iconic bands and their songs.

Which city – San Francisco or Kansas City – has produced the most enduring, memorable music during the rock ‘n’ roll era?

So, we’ve drawn up Top 10 playlists of songs from artists representing each city to give you, the listeners, a chance to decide which metropolis outscores the other to take home the championship trophy. (Personally, our oddsmakers think The City by the Bay — and its suburbs — has a big edge, but to each his or her own.)

Of course, it was tough winnowing things down considering the MVP artists who’ve called these cities their home over the years, but geez, we had to start somewhere. Feel free to toss out the red challenge flag and post your own Top 10 lists in the comments below. And scroll down to listen to songs from all of the artists on both Top 10 lists at Spotify.

Then, go tap that beer keg and gorge yourself on nachos, cheese curds, buffalo wings and brownies – then get ready to doze off midway through the second quarter .. .

2. Sly & The Family Stone, “Everyday People” (1968) – When it comes to influential San Francisco bands, Sylvester “Sly” Stewart tops the list. We could have chosen almost any song from the funky and soulful band’s heyday, but this remains an uplifting gem.

3. Santana, “Smooth” (1999) – Sure, early tracks “Black Magic Woman” and “Oye Como Va” would be the popular picks, but it’s impossible to ignore this smash hit and its impact after it was released. And of course, some members of Santana went on to even greater glory with another San Francisco band by the name of Journey. (See Honorable Mentions below.)

4. Creedence Clearwater Revival, “Up Around the Bend” (1970) – Appearing on John Fogerty and band’s “Cosmo’s Factory” album, the guitar work and lead vocals on this song are examples of CCR at its finest.

5. Green Day, “American Idiot” (2004) – These East Bay punkers undeniably changed the landscape of their genre and Billie Joe Armstrong’s 2004 rock opera is an in-your-face masterpiece of disillusionment – a sad anthem for the times.

6. Pointer Sisters, “Jump” (1984) – Technically, the Pointer Sisters were formed in Oakland but first made their mark in San Francisco nightclubs. The superstar band managed to score more than a dozen Top 20 hits over a 12-year period with songs that spanned everything from pop to disco to funk to soul to dance music and rock.

9. Big Brother and the Holding Company, “Piece of My Heart” (1968) – Known of course as the vehicle for legendary singer Janis Joplin, this band scored its biggest hit with this tune penned by Jerry Ragovoy and Bert Berns.

10. (TIE) Dead Kennedys, “Holiday in Cambodia” (1980) – Don’t under-estimate the power of these politically satirical, hardcore punks who released such classics as “Fresh Fruit for Rotting Vegetables,” “Plastic Surgery Disasters” and “Bedtime for Democracy.”

Counting Crows, “Mr. Jones” (1993) – Ok, this is another East Bay outfit, but the band’s 1993 classic, “August and Everything After” ranks as one of rock history’s most impressive debut albums – an monument to brilliant songwriting.

LISTEN TO ALL OF THE SONGS ON THE SAN FRANCISCO PLAYLIST:

1. Big Joe Turner, “Shake Rattle & Roll” (1954) – Big Joe Turner could be the main reason why Kansas City is associated with the blues. And some say rightfully that the “daddy of the blues” was also one of rock ‘n’ roll’s true pioneers.

5. The Elders, “Raging Sea” (2009) – In the field of Irish-American folk music, it gets no better than The Elders. This Celtic-fueled bunch has toured the world, not to mention playing West Michigan fairly regularly over the years (and featuring West Michigan fiddler Diana Ladio).

6. Burt Bacharach, “What the World Needs Now is Love” (Jackie DeShannon, 1965) – As a songwriter, K.C. native Burt Bacharach ranks as one of America’s most celebrated composers, with tunes performed by more than 1,000 different artists and racking up Top 40 hits galore.

7. Chely Wright, “Single White Female” (1999) – Country singer Chely Wright could be considered a trailblazer: The one-time “Kansan of the Year” was one of the genre’s first stars to come out as a lesbian.

10. Coalesce, “Blue Collar Lullaby” (2003) – In the world of mathcore, Coalesce was considered royalty after bursting onto the scene in the mid-1990s with its punky metalcore approach. This is a rare acoustic rendering of the band’s approach.

LISTEN TO ALL OF THE SONGS ON THE KANSAS CITY PLAYLIST:

Have your own faves? List them in the comments below.