Legendary British guitarist Steve Hackett played 20 Monroe Live on Tuesday night, impressing longtime fans. Here are the reactions and reviews from two of them, only at Local Spins. 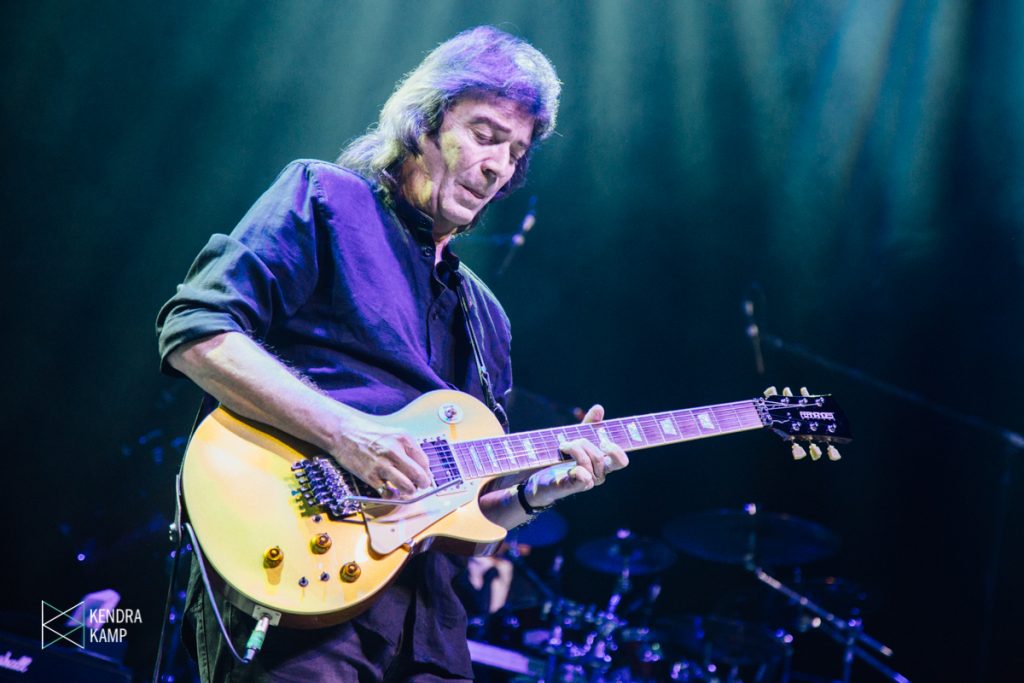 EDITOR’S NOTE: Northern Michigan writer Ross Boissoneau, who recently interviewed Steve Hackett for Local Spins, and Grand Rapids singer-songwriter Tim Perry are both Genesis devotees who attended Hackett’s tour stop at 20 Monroe Live on Tuesday night. Here are their impressions of the show, with a photo gallery by Kendra Kamp below.

Fans of that hoary old dinosaur, progressive rock, turned out in force for “the legend that is Steve Hackett,” as he was introduced by woodwind player Rob Townsend.

He showed his complete mastery of the guitar, from intricate fingerings at lightning speed, string-bending and hammering on the whammy bar, to delicate touch on both six- and 12-string acoustic.

The show opened with the fan favorite “Everyday” from 1979’s Spectral Mornings. That and “The Steppes” from the following year’s Defector were balanced with new tracks from the upcoming The Night Siren, including the swirling “El Nino” and a rocking, raucous “In the Skeleton Gallery.” 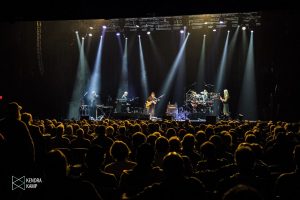 Hackett and band – Townsend, drummer Gary O’Toole (in a natty suit), Roger King on keyboards, and bassist/guitarist Nick Beggs (also natty, though in a, um, kilt) – ran through an hour-long set, touching bases from throughout his career. The vocals, too, were strong, and everyone sang except King.

The second set kicked off with “Eleventh Earl of Mar” from “Wind and Wuthering,” celebrating the album’s 40th anniversary. Vocalist Nad Sylvan channeled Peter Gabriel and Phil Collins while still bringing his own style.

Hackett dedicated “… In That Quiet Earth” and its followup, “Afterglow” to the late John Wetton, who performed the latter with Hackett on numerous occasions.

In addition to tracks from Wind and Wuthering, Hackett showed his world-class chops on “Firth of Fifth” and closed the show with the epic “Supper’s Ready,” before returning for an encore of “The Musical Box.”

More like Genesis refined, as the musical muscle of the band showed the songs and the player haven’t lost anything in the intervening years.

THE QUIET INTENSITY OF STEVE HACKETT
By Tim Perry 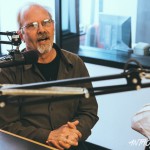 I came to know of Steve Hackett as most did, through the iconic prog-rock group, Genesis. Back in the mid-70s, I would often gather with several friends at a buddy’s house to listen to music and engage in questionable activities.

My first listen to Genesis was 1976’s “Trick of the Tail” album and was immediately floored. It was about the only thing I listened to for the next month. Then I worked my way backward through the band’s Peter Gabriel catalog.

Though I enjoyed and appreciated Gabriel’s approach, Collins was the vocalist who hooked me on Genesis. And I’d never heard drums played as he played them. But of course, Genesis was much more than that. Sandwiched between Tony Banks’ overwhelming synth and keyboard prowess and Mike Rutherford’s masterful bass and double-neck work, was Steve Hackett’s searing, ethereal guitar.

When I learned that Hackett would be coming to Grand Rapids at the brand new 20 Monroe Live venue, I knew where I’d be that night. I’d largely lost track of Hackett after he exited Genesis in ’77, disappearing into the ether of his less visible solo career. So as I anticipated this Grand Rapids appearance, I knew that he’d been with Genesis for just six years, but also had 40 years’ worth of subsequent solo material in his book. 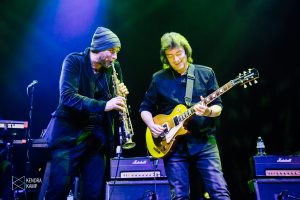 I encountered a number of absolutely giddy Genesis fans, eager to share their excitement and experiences. I overheard others, exuberant with anticipation. The crowd was predictably older, but I also watched several young girls a few rows ahead of me (with their parents) rocking out in their seats.

Hackett’s first set was at times lively, often subdued, but always engaging. He was accompanied by drummer Gary O’Toole and his Collins-esque drum kit, keyboardist Roger King, sax/flute player Rob Townsend and bassist Nick Beggs. Vocalist Nad Sylvan didn’t appear on stage until the second half set of Genesis material. Though I didn’t recognize any of Hackett’s solo works, I found myself warmly entertained. And rather floored by a particularly stellar passage of guitar work that closed the first set.

Hackett is a very focused and quietly intense guitar player, only rarely breaking into an occasional smile. Though affable and humble, Hackett only spoke to his audience briefly.

But he was clearly happy to be playing in Grand Rapids and spoke well of his experience here. I couldn’t believe someone shouted, “Freebird!” during one of his audience exchanges. I groaned at the time, but it was actually pretty funny, considering.

The second set was what I had come for. Celebrating the 40th anniversary of the “Wind and Wuthering” album (his last with Genesis), Hackett opened with “Eleventh Earl of Mar.” The appreciative crowd roared with approval as he worked his way through Genesis classics “Blood on the Rooftops,” “. . . In That Quiet Earth,” “Afterglow,” “Dance on a Volcano,” “Firth of Fifth” and “Supper’s Ready.”

Hackett closed the show after one encore – a satisfyingly climactic rendition of “The Musical Box.” My only real disappointment is that “One for the Vine” didn’t make this set list. 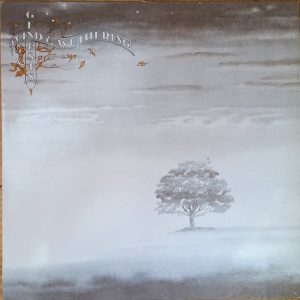 Though quite competent and musically adept in their own right, Hackett’s bandmates naturally conjured up comparisons to the original members and their performances. To their credit, they did well with this challenging material, and I enjoyed it thoroughly. (Note to Mr. Hackett though: You really need to turn your drummer loose, particularly on songs like “Dance on a Volcano” and “Afterglow.”)

I found it fitting though because, for many Genesis fans, there also could be no substitute for Steve Hackett’s ghostly guitar brilliance when he departed Genesis in ’77 (My apologies to a very competent Daryl Stuermer, Hackett’s road replacement).

So this was a bit like returning to my friend’s childhood home after several decades away. The old house is still there, but the paint scheme is different. Trees are either unrecognizably big or missing altogether. The neighbors are all gone, but their echoes remain. And though things have obviously changed, enough of my memories remained to make it a thoroughly warm and satisfying return. 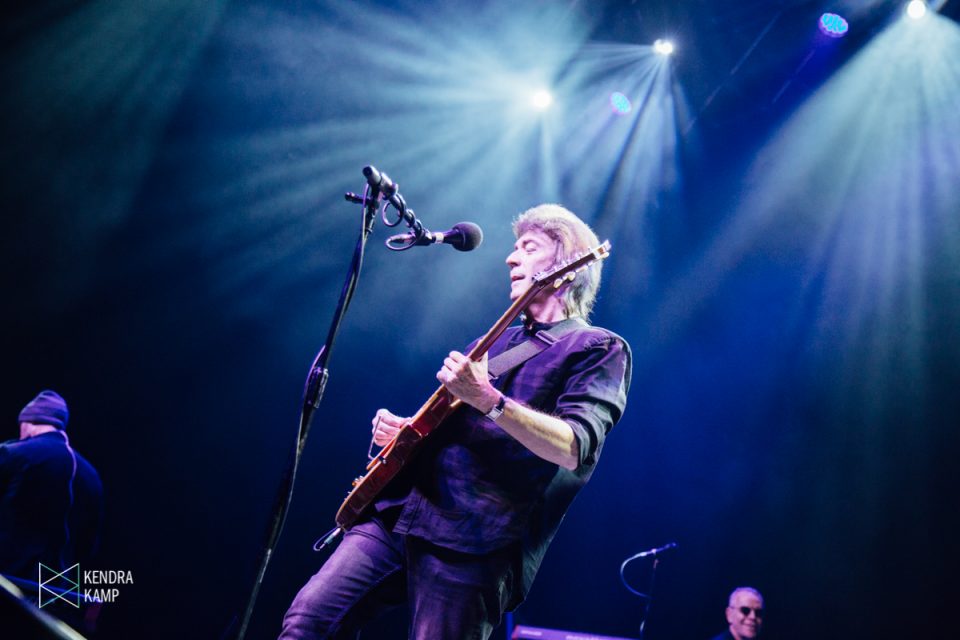 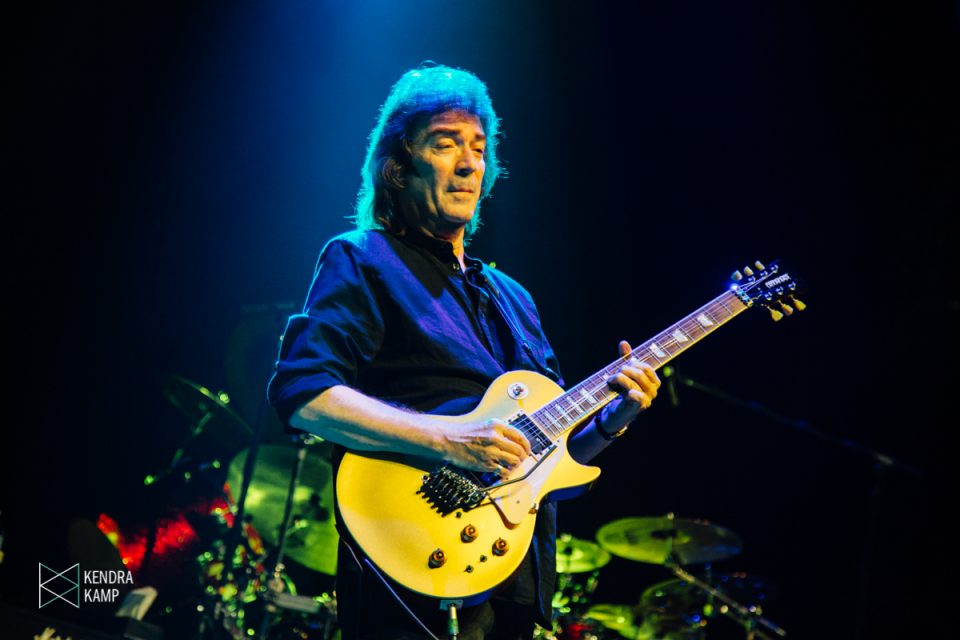 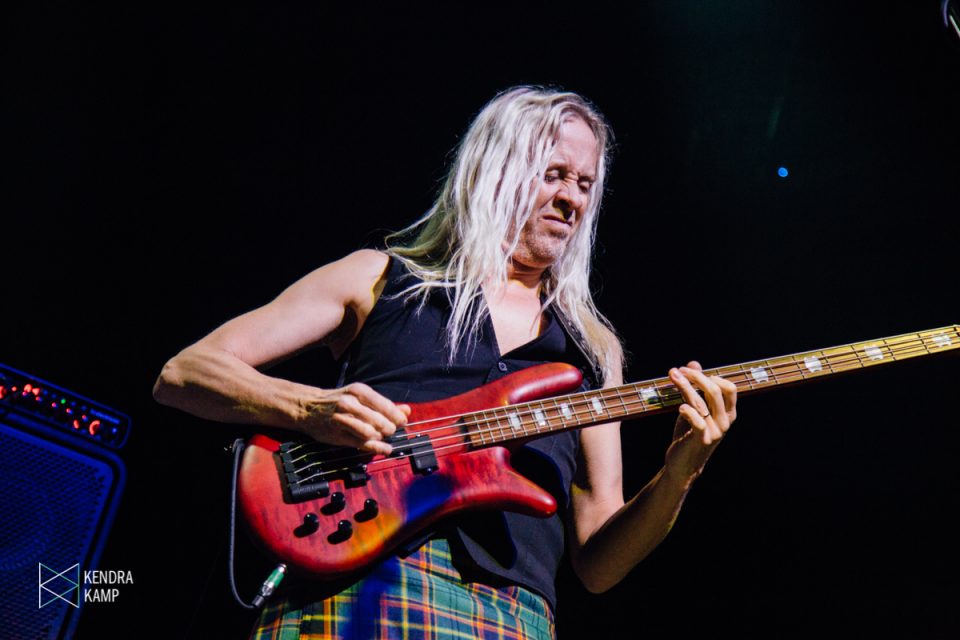 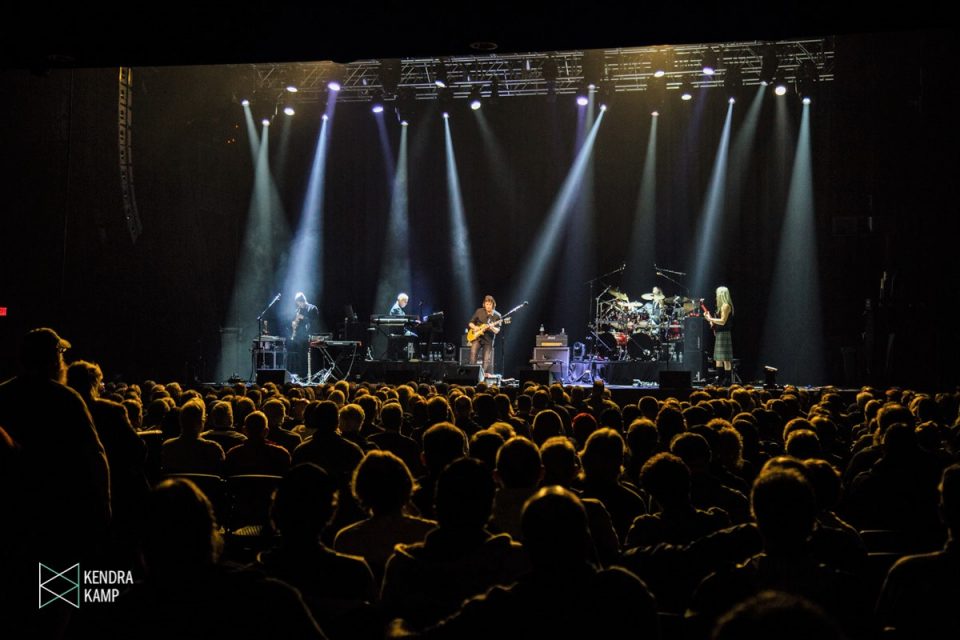 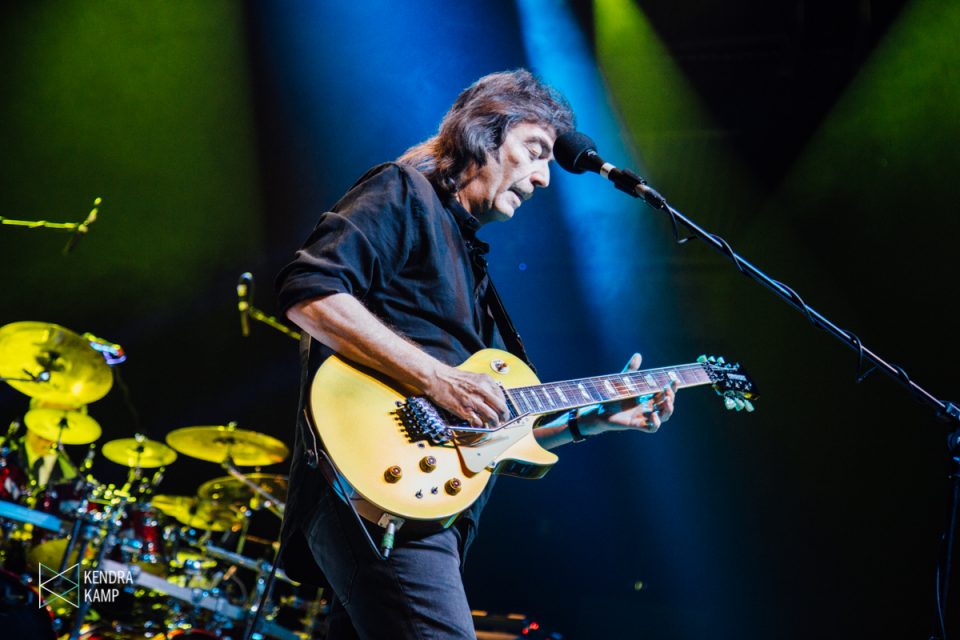 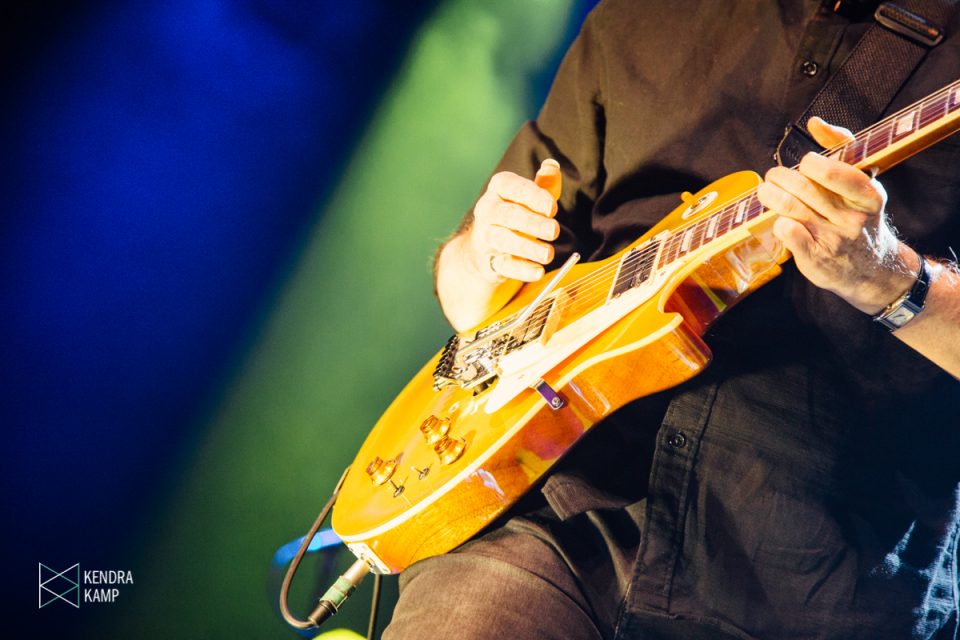 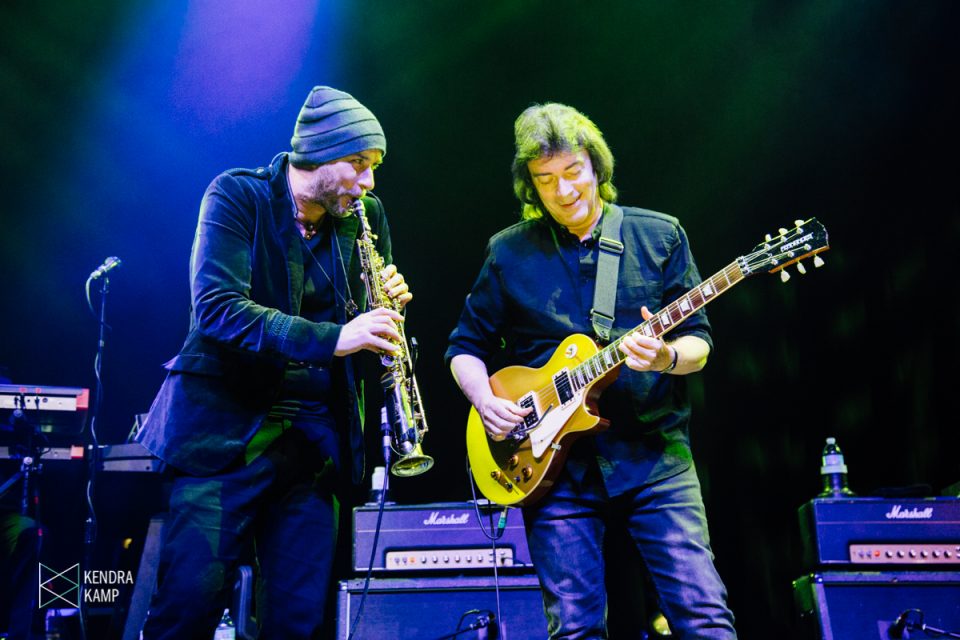 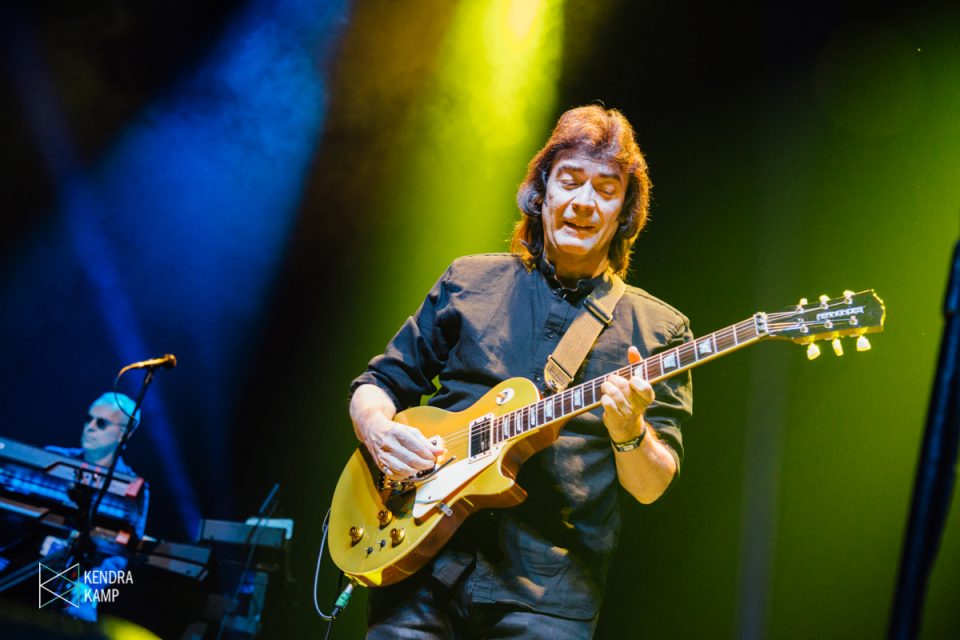 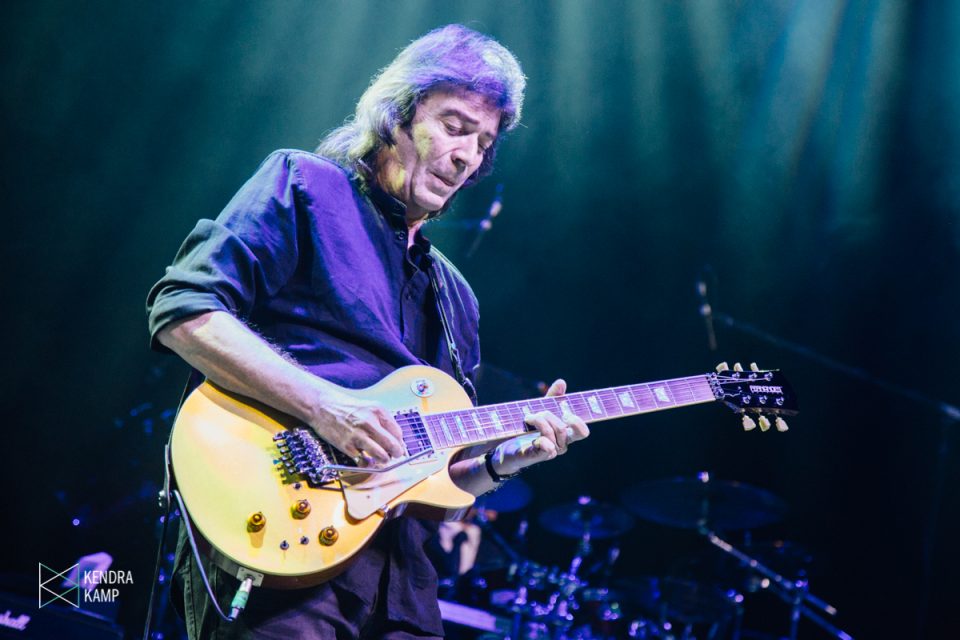