The historic Grand Rapids venue will ‘keep music alive’ in 2021 by hosting a wide array of virtual shows starring Ralston Bowles, Roger MacNaughton, Rachael & Dominic Davis and many others. 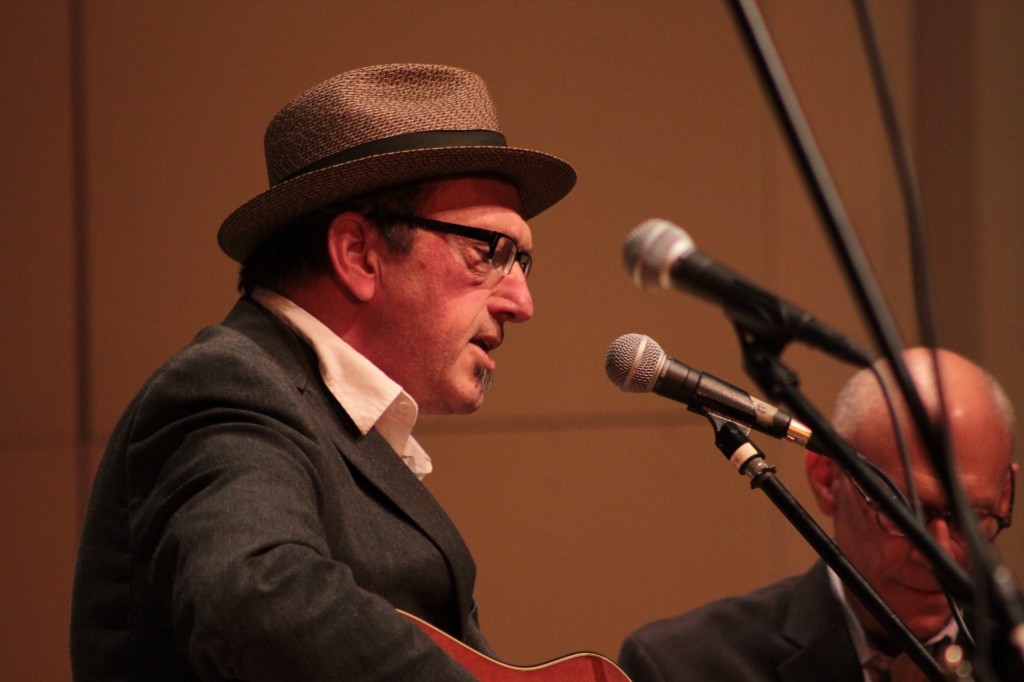 Launching a New Series: Ralston Bowles, who helped kick off the Acoustic Cafe Folk Series back in 2014. (Photo/Anna Sink)

The free, live-streamed concerts on St. Cecilia’s Facebook page and YouTube channel will kick off the year on Jan. 14 with Ada pianist Roger McNaughton performing from the Royce Auditorium stage. 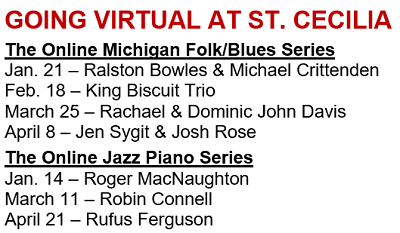 “It is always a pleasure to perform at St. Cecilia,” said Bowles, who not only closed out a Fresh Folk/Local Spins Live concert series at Royce Auditorium in 2014 but helped debut St. Cecilia’s Acoustic Café Folk Series later that same year.

“To share the socially distanced stage with Michael Crittenden will make it all the more so.”

The jazz piano series wraps up with Grand Rapids pianist Robin Connell on March 11 and Rufus Ferguson on April 21. The concerts all begin at 7 p.m.

“Of course, I’m tremendously pleased and excited,” MacNaughton said of the upcoming jazz piano live-stream. “What an honor to be asked to present some of my compositions. Many thanks to Cathy Holbrook and SCMC for giving me this opportunity.”

Cathy Holbrook, St. Cecilia’s executive and artistic director, called the numerous offerings a way to “keep music alive” in West Michigan while allowing viewers to enjoy the concerts safely from their own homes.

Due to COVID restrictions that have prevented in-person events, St. Cecilia has hosted numerous virtual concerts in recent months, continuing tonight (Thursday) with the Chamber Music Society of Lincoln Center’s “The Brandenburg Concertos.” 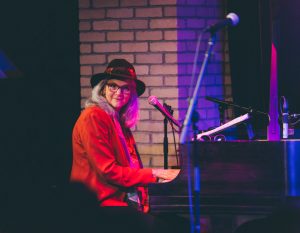 Robin Connell: Playing the series in March and featured in the 2021 Local Spins Calendar. (Photo/Kendra Petersen-Kamp)

Previously announced live-streamed concerts in St. Cecilia’s folk series will feature “Mariza Sings Amalia” on Jan. 2 and Judy Collins on Feb. 12 (both $40 with 48-hour viewing) as well as Kat Edmonson on March 4 (free).

St. Cecilia also has added a new jazz concert on April 15 starring Delfeayo Marsalis & The Uptown Jazz Orchestra, a performance that will be taped and presented online for West Michigan fans.

Bowles noted that the Jan. 21 concert with Crittenden will be his first live-stream show from a venue in nearly a year.

“I hope it marks a continued improvement of opportunities for the music community of artists and audiences and venues,” he said. “These are strange times and music events like this seem to send a reassuring message as well as offer a degree of normalcy to us as performers.”

Although most of the online concerts are free to viewers, St. Cecilia is encouraging music fans to donate to the organization online here.