The veteran West Michigan artist unveiled tracks from the release for Local Spins on WYCE, which also debuted music by Billy Strings, Citizen Keen, Cal in Red and more. As a seasoned West Michigan singer and guitarist who’s penned more than 200 songs over the years, Josh Rose is keenly aware of the substantial hurdles facing an artist who strives to keep things novel and who grapples to avoid repetition.

Rose calls it “the challenge of writing a song that is fresh, unique, covers subject matter that you haven’t sung about before, doesn’t use musical ideas that you’ve used before, or rhythms or time signatures or keys – that part is a lot tougher to sift through everything that you’ve done, everything that has been collecting in your brain music-wise for years, and then create something that is original.”

But at 48, the Ada singer-songwriter has navigated that tricky and torturous maze of obstacles by delving into what he terms “spooky folk” for “Foreverland” – his first studio album in eight years and the follow-up to “Laminate.”

“I love electronic sounds, I love pads and keyboards and atmospherie, ethereal sounds,” Rose said. “I decided to take that two-word phrase, ‘spooky folk,’ and apply it to everything we did on the record. … If it wasn’t spooky folk, it’s not on the record.” Rose and Crittenden played all the instruments on the album, with singers Kyle Rasche and Sierra Cassidy on backing vocals.

“The Colonel (Crittenden) is a master producer and engineer. I love working with him,” Rose said. “He’s so creative and has a golden ear. Kyle and Sierra are such incredible vocalists, able to be so creative and the perfect complements to my songs. All three of them are also my great friends.”

For this week’s edition of Local Spins on WYCE, Rose spotlighted two tracks from the new album – “Million Miles Per Hour” and “Thank God Riverside.” Scroll down to listen to the tracks and to the entire radio show podcast.

Rose will be accompanied at the show by his band, The Founding Fathers, which features bassist Mark Hugger, keyboardist Chris Ranney, drummer Brian Morrill and Rasche.

A BURNING PASSION FOR SONGWRITING AND MENTORSHIP

“The live show will have more energy because I have an incredible backing band,” Rose said, noting that it’s the only performance he currently has on the books in coming months though he hopes to add some festivals and other shows to his 2023 schedule.

For Rose, the long hiatus between studio projects can be attributed to fatherhood, the COVID pandemic, his job as a chemistry teacher at Lowell High School, fishing and other pursuits. 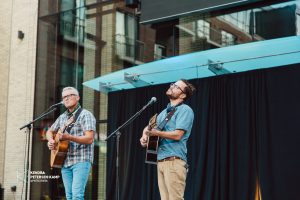 “I picked away at it for two years,” he said of “Foreverland.” “But here we are. I finally have a studio record. I couldn’t be more proud.”

He’s also spent time as a songwriting mentor, serving as an instructor for Wheatland Music Organization camps and otherwise sharing his talents with other musicians – part of what drives him as a tunesmith.

“I love writing and art and music. It’s something I have to do. It’s not simply a tiny season in my life and then move on to other things,” said Rose, who also calls Wheatland “a magical place.”