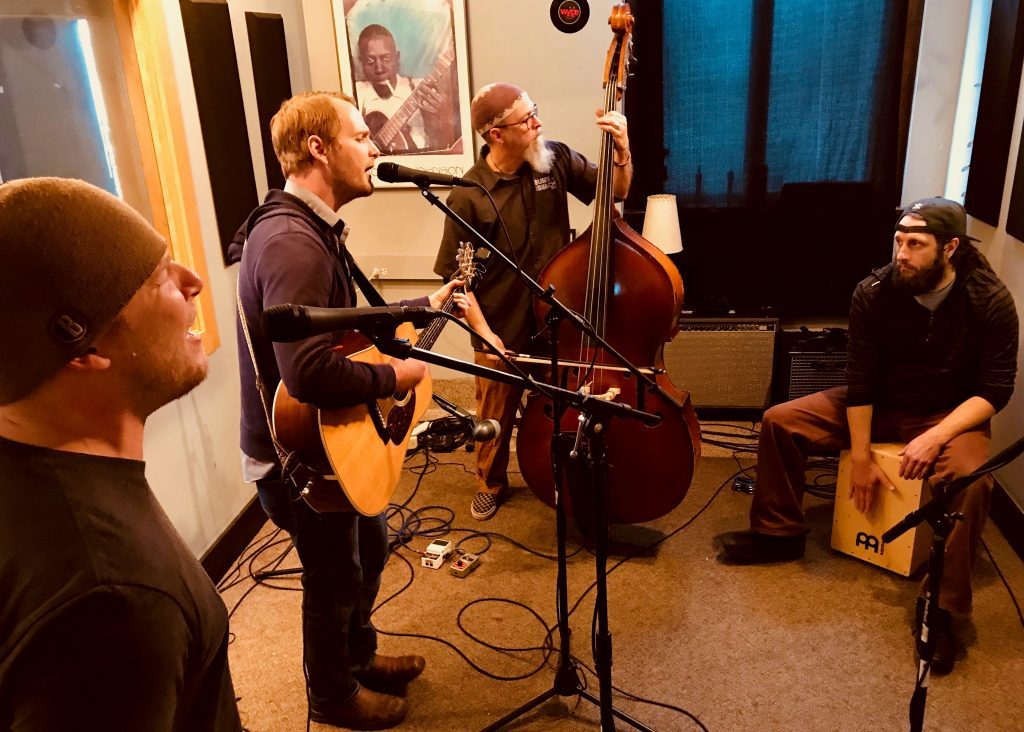 It’s been four years since Roosevelt Diggs released its last album, “Songs from the Shed,” but members of the West Michigan Americana band always felt like that next recording “was right around the corner.”

After months of “breaking down the songs” to whip them into shape and working long hours at Grand Haven’s Third Coast Recording, the band’s “Better Days” officially debuts Saturday night at a release show at Founders Brewing Co. in Grand Rapids.

“It came down to us just taking the time that we needed to take … and really making sure (the songs) were structured the way we want,” said guitarist and singer Logan Duddles, who’s joined in Roosevelt Diggs by brother, Levi, on guitar, Jon Shears on bass and John Ellsworth on drums and percussion. 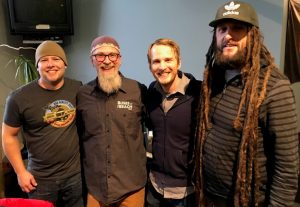 “We had expectations of making the album we wanted to make and I think we took the time we needed to take to get there.”

What’s resulted is a rootsy, 12-track compilation of smartly crafted songs that span Americana, bluegrass, country and folk-rock, filled with classic harmonies – something that represents the maturation of a band that’s been together for a decade.

“When we started, we were pretty green as a band,” Logan Duddles conceded. “Our first experiences playing shows was for the most part in this band. We made all the mistakes we needed to make. Our songwriting has grown a ton.”

As for those sibling harmonies, Levi Duddle said “a lot of it is natural, but I won’t say we didn’t have to work for it. We knew that Logan and I could sing together, but really, it took years of singing together to really understand how to do that effectively.”

Band members showed how that experience has paid off during their appearance in-studio for this week’s edition of Local Spins on WYCE, where they performed renditions of “I Only Have Myself to Blame” and “Everything As it Was.” Watch a video here, with the full radio show podcast below.

VIDEO: Roosevelt Diggs, “I Only Have Myself to Blame” (Local Spins on WYCE)

The new album — the band’s third — features guest appearance by the duo of Adrian and Meredith Krygowski (who’ll also perform at Founders on Saturday), celloist Daphne Shears and pianist Joe Hettinga, who also mixed the album and co-engineered it with Kevin Kozel. The album was produced by Roosevelt Diggs.

“We are all really proud of the growth in songwriting and song structures on this album. We feel it’s a huge step forward from anything we’ve previously released,” said Logan Duddles. “Our bond connects us on a level not all bands have. This connection allowed us to work together as a one to create something very special.” 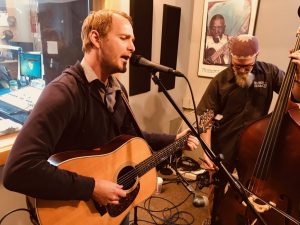 Taking the Time They Needed on the New Album: Logan Duddles and Jon Shears in Studio X at WYCE. (Photo/Local Spins)

Influenced by the likes of Drive-By Truckers, Wilco and Uncle Tupelo, the band’s music also occasionally reflects the attitude of the punk and harder rocking groups that the Duddles listened to as youngters before they “shifted gears” and gravitated toward Americana music.

For Saturday night’s album-release show, Roosevelt Diggs will bring special guests Adrian and Meredith on stage, along with Pettinga on keyboards, giving the band a bigger on-stage presence than usual.

Roosevelt Diggs will take the stage at Founders Brewing at 9:30 p.m. Saturday, followed by a set from East Nashville’s Adrian and Meredith. Admission is $5.

The band also plays Old Dog Tavern in Kalamazoo on Dec. 8, with Leaf/Van Acker also on the bill.

After take some time off following the December show, Roosevelt Diggs intends to “hit it hard” in 2019, touring behind the new album and playing numerous festivals.

Check out the Nov. 2 edition of Local Spins on WYCE: Brother Elsey shines as band of brothers