Saturday’s Record Store Day is postponed until June but shops already reeling from the shutdown wonder if vinyl lovers will be back that soon. See how indie music shops have been impacted by the crisis. 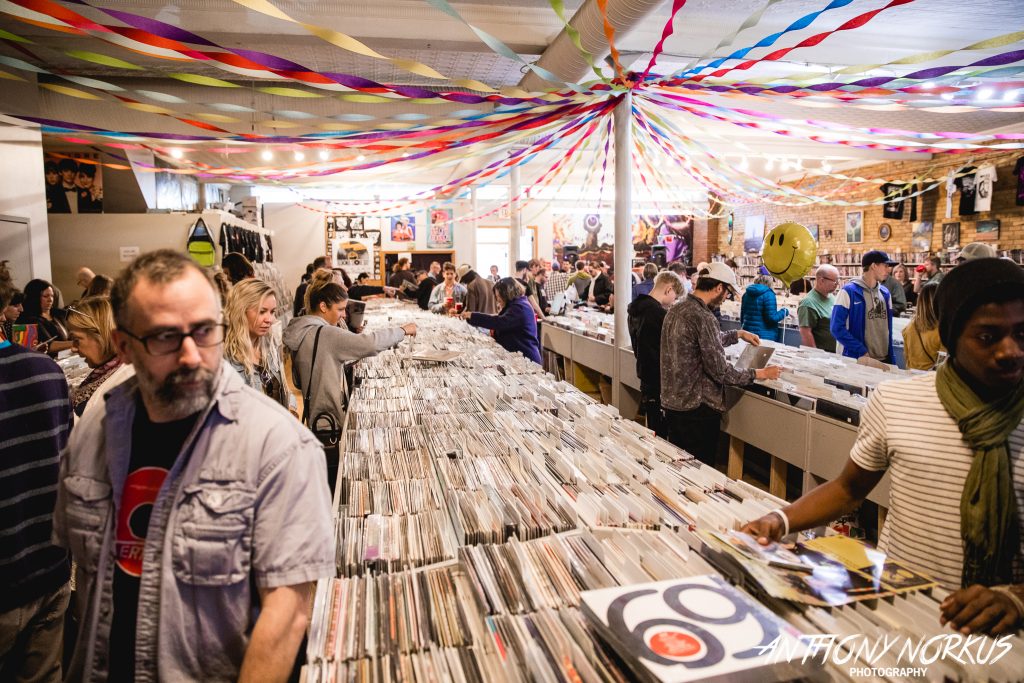 Delayed Until June: Customers have packed Vertigo Music during April’s Record Store Day in the past. (Photo/Anthony Norkus)

This coming Saturday was supposed to mark the annual celebration of Record Store Day, with independent record shops teeming with vinyl buyers, DJs and bands performing, and special releases commemorating the day.

In that single day in April, many record stores rack up a month’s worth of sales or more, though the real power of the event lies in the camaraderie of like-minded music lovers and the connections made.

Dodds Record Shop, aka Reverend Charles’ Museum of Music and Memorabilia, on Grand Rapids’ West Side even hosts a short, goofy parade each year touting the magic of indie record shops.

Indeed, last year’s headline from Local Spins’ coverage of the 12th annual event said it all: “Record Store Day in West Michigan – Vinyl passion that ‘gets bigger every year’ and a parade.”

Not so this Saturday.

Record stores across Michigan – and much of the country – are closed due to the COVID-19 pandemic. Officially, Record Store Day has been pushed back to June 20, but some wonder whether even that might be overly optimistic. 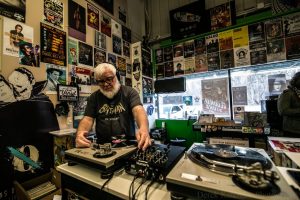 Not This Year; Entertainment at a recent Record Store Day at Green Light Music. (Photo/Derek Ketchum)

Like other indie outlets, Green Light Music in Kalamazoo has been hit hard by the pandemic because the store depends on walk-in traffic.

“As Green Light has always been primarily focused on in-store sales and in-person customer service, the COVID-19 shutdown has been a big blow to the store,” said owner Abe Savas.

“We’ve had to temporarily lay off staff and ratchet up online sales, and we’re definitely not in the place we would have hoped or imagined we would be with April 18 coming in just a few days.”

Paul Pretzer of Muskegon’s Third Coast Vinyl called the situation “a complete blow. Devastating.” He estimated he’s lost 99 percent of his business because the store has had only a few online sales, though it is selling inventory via Discogs.

Grand Rapids’ Vertigo Music on S. Division Avenue – an uber-popular Record Store Day destination – has pushed online purchases of its products in recent weeks, but sales are still down 40 to 50 percent from what they were prior to the pandemic shutdown, said Brandon Hill, Vertigo’s sole full-time employee aside from owner Herm Baker.

“The big thing, too, about Record Store Day is stores spend a lot of money to make it happen,” Hill said. “In order to get those exclusive releases, you have to spend quite a bit of money to get them, so expecting stores to order when they’re not even clearing $15,000 in sales is ridiculous.”

RECORD STORE DAY ‘A BIG DEAL’ BUT WILL IT HAPPEN EVEN IN JUNE?

Perhaps the single most important day of the year for indie shops, Record Store Day celebrates new and used physical media of all sorts – CDs, cassettes, vinyl – though the resurgence of vinyl LPs has driven most sales.

Organizers had hoped the delay to June 20 might boost chances of stores being open, but some aren’t sure that two months will be enough time.

“I’m a bit skeptical,” Hill said. “I’d like to be open of course, but I don’t want anything to open if it’s a risk of making things worse. I think a cautious optimism is probably the best course of action.”

For Reverend Charles Preston Smith, who runs the tiny Dodds Record Shop on Bridge Street NW, Record Store Day is not just a big day for business, but an opportunity for a party. He gives the day a celebratory flair, with band performances and a rootsy parade from his shop down Bridge Street.

“I really question if it’s gonna happen in June, just with the way things are playing out,” Smith said. 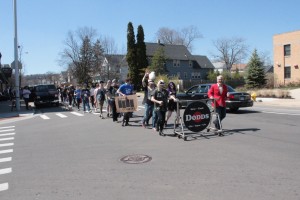 “Record Store Day is always a big deal. Years ago, it would make or break some stores. It was created to get everybody back out into the stores again, and I’m looking forward to that. But how comfortable are we gonna be filling these places back up?”

Pretzer said even a June celebration would be modest. “Between millions of people losing their jobs and the fear that people will still have about this — and the two to three months loss of revenue leading up to it — I would not be able to fund the inventory I usually have. Personally, I don’t expect it to happen.”

Indeed, with social-distancing and hand-sanitizing the new norm, it may take time for patrons to readjust to flipping through vinyl bins via an in-store retail environment.

“When we do eventually open, we will resume the thorough cleaning and disinfecting steps we took in the weeks before the shutdown occurred,” Savas insisted, “in addition to any other CDC (Centers for Disease Control) or government-recommended or mandated actions to ensure everyone feels comfortable.”

But Pretzer said that’s almost impossible: “How would you continually sanitize 8,000 records? How would you trust your customers to not contaminate stock? You can’t control it.”

Some record stores, such as Vertigo, were prepared for the worst even before Michigan Gov. Gretchen Whitmer’s March stay-at-home order.

“We ceased any and all storefront sales before shelter-in-place was even put into play, around the time when things were starting to get more serious,” Hill said of the store that’s revered by vinyl aficionados.

Vertigo is among hundreds of indie record shops across the country suffering from the effects of the pandemic. Stores have laid off scores of employees, and the future of many businesses is now uncertain. In addition, many record labels are now choosing to delay releases, meaning stores won’t be able to fill orders for new material.

Vertigo’s tiny staff actually worked to its advantage when the coronavirus hit Michigan.

“We’re kind of fortunate in that regard,” Hill said. “We didn’t have a lot of full-time people relying on a paycheck like some places.”

Michigan’s COVID-19 shutdown recently was extended until April 30, but many expect the economic impact on retailers to last well beyond that.

That includes independent music stores serving musicians with instruments and gear: Grand Rapids’ Rainbow Music – which has operated since 1979 – has been “pretty much complete as far as shutdown and lost sales,” said co-owner John Gelderloos.

“We are doing a bit online and catering to call-ins for pickup and delivery. We have quite a few loyal customers that have been very supportive.”

But help from the government has been slow and Gelderloos said Rainbow Music has waited for weeks on response to a loan application. He said he hopes the store can reopen in May, but concedes “medical experts should make the call.”

Vertigo Music originally shut its doors completely for 10 days after the stay-at-home order went into effect before deciding to shift to online sales via Discogs. They worked quickly, trying to list as much product as possible and keep online orders flowing. 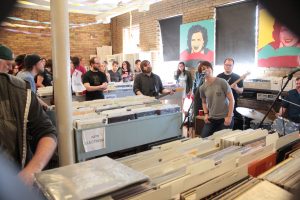 They’ve also stepped up their social media strategy and started offering 10 percent discounts to customers. “There’s definitely a bump in online, but it’s not replacing walk-in,” Hill said. “And we’re probably one of the luckier stores.”

At Dodds, which has a smaller inventory and limited hours, the impact has been less severe.

“I think I’m one of the unique cases because all I had to do was step my online up a bit,” said Smith, owner and operator. “The only thing that COVID affected for me is it’s a bummer to not greet customers and hang out with people. I feel for anybody that has the responsibility to make ends meet for themselves and their employees. I can’t even imagine.”

Savas said Green Light has “a small selection of our inventory available online on Discogs” which it supplements every day.

“It’s my hope we can physically open as soon as it’s safe to do so, but with the situation developing almost daily, it’s hard to know when exactly that will be,” he said of the “unique circumstance” caused by COVID-19.

Despite that uncertainty, some West Michigan record store operators remain upbeat about the future.

“The thing is, record stores are traditionally very resilient,” Hill said. “Herm (Baker) has been here for 20 years and he’s survived the iPod, streaming, all sorts of changes in the industry. I think I’m more fearful for the music industry at the moment than just specifically record stores.

“For the time being, we’re trying to just work with what we have and keep everybody safe.”

Smith noted that Dodds Record Shop is a longtime Grand Rapids institution, founded decades ago by Gerry Dodds, who ran it for years on S. Division Avenue.

Check out Local Spins photos and coverage of the 2019 Record Store Day.