Topping the early August batch of new releases is the Sony Music Masterworks debut for a popular Traverse City trio, plus fresh recordings from an eclectic bunch of West Michigan artists. Check out the reviews, listen to samples of the new music.

EDITOR’S NOTE: This is Part 1 of Local Spins’ regional albums roundup for August. Return to Local Spins next week for Round 2. And listen to this month’s Local Spins segment of Michigan Radio’s “Stateside” spotlighting The Accidentals, The War & Treaty and Jesse Ray & The Carolina Catfish via podcast online here. 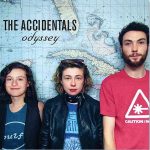 After hundreds – if not thousands – of exuberant performances across the country since they were mere teens attending Interlochen Arts Academy, The Accidentals have managed to maintain their youthful freshness, their innocence and curiosity, their uber-gregarious nature. It’s served them well as they’ve turned important heads and ascended the music industry ladder. But make no mistake: Multi-instrumentalists Savannah Buist, Katie Larson and Michael Dause haven’t stood still musically – integrating some of the best of the genre-spanning artists they’ve encountered along the way. Consequently, listeners absorbing “Odyssey,” the Traverse City alt-folk band’s impressive debut album on the Sony Music Masterworks label, will immediately take notice of the lush, wall of sound that envelops each track – enhancing familiar tunes such as “Crow’s Feet” and “Stitches & Seams” which the group has been performing live and bolstering new classics. In particular, the keyboard work – courtesy of guest artists Jenny Conlee (The Decemberists), co-producer Jason Lehning and Rick Buist – adds welcome textures and dynamics to intricate, eclectic music that’s as magical as it is literate. “Thursday had a tangerine taste lingering like old sweat clinging to your shoes; though the daylight’s curtains close, these memories still falter from daily abuse,” Buist writes on “Cut Me Down.” Indeed, uncommon and poetic wordplay weaves its way throughout “Odyssey,” making this one of those rare albums worth studying and dissecting as well as cranking up volume-wise for a windows-down road trip. Recorded and mixed by engineers at studios across the country, “Odyssey” showcases The Accidentals’ best work yet, the perfect cotillion ball to introduce these Michigan marvels to a national and international audience. And perhaps no track embodies the band’s artfully augmented sound better than “Earthbound,” a brilliant mix of smart lyrics and instrumental power that still captures the band’s lovable and humble indie-folk charm while propelling them into more expansive musical cosmos: “To the core, I’m a carnivore,” they sing. “I will never be earthbound.” – John Sinkevics
Website: theaccidentalsmusic.com
Upcoming Shows: 6:30 p.m. Thursday on the Grand Rapids Art Museum terrace in downtown Grand Rapids for GRAM on the Green; Aug. 17 at Saint Andrew’s Hall in Detroit; Aug. 18 at Hoxeyville Music Festival in Wellston; album-release shows Aug. 27 at Lake Leelanau’s Fountain Point Resort, Oct. 26 at Kalamazoo’s Bell’s Brewery, Oct. 27 at Muskegon’s Frauenthal Center.
Listen/Watch: “KW” 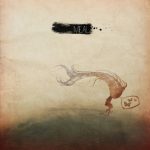 Paucity, in its decade-plus as Grand Rapids’ go-to instrumental post-rock act, has achieved the rarest of feats. Using the foundational elements of rock — guitar, bass, drums — the band has crafted a sonic identity wholly its own, which is much harder than it might seem. Similarly rare feat: Playing as local support for a touring act and blowing them the hell off the stage, which Paucity emphatically did when opening for Tortoise at the Intersection in 2008. Still masterful as ever, the band’s core trio — Jared Wekenman, Kertis Lytle and Alex Hamel — continues to evolve and refine. Its latest album, “Meal,” features Paucity trademarks like wall-of-sound freak-outs, harrowing dynamic shifts and guitar-bass interplay that almost feels conversational. But it’s the subtle touches that make this album — recorded at studios throughout West Michigan and released late last year — a compelling and headphone-mandatory listen. Dig the shifting meters and tempos in “Princely” or the layers of clean and dirty guitar that fade to make room for a stately keyboard arpeggio on the album-closing “Will Not Stand.” On its third full-length, Paucity makes a convincing argument that aging and settling are not the same thing. – Troy Reimink
Website: paucity.us
Listen: “Sonder” 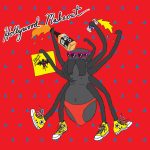 It could only have happened on a boat. Summer had barely started, and Grand Rapids surf-rock champions Hollywood Makeout had already thrown the biggest FOMO-inducing soiree of the season: an EP release show on a sold-out nighttime cruise aboard the venerable Grand Lady Riverboat, with the requirement that attendees dress in nautical attire. The achingly brief, six-track “Speedo Spider” — recorded to analog tape at the Goon Lagoon and issued on vinyl, cassette and digital through dizzybird records — is adequate consolation for anyone who missed the festivities. Try not to think of a 1960s beach-party movie when Erin Lenau’s “doot-doot’s” come in behind the freakishly catchy chorus of opening track “Wheelhouse.” Or Tim Warren’s woozy slide guitar atop the slow-dance chord progression on “Space Jam.” Or Tim Broderick’s deceptively straightforward drum solo amidst the changing time signatures in “Orange Peels and Ashtrays.” Or Cedric Canero’s secret-weapon bass intros and breakdowns in “Cold Shoulder” and “Scary Pleather” (a tribute to bygone Grand Rapids psych-rock band Haunted Leather). “Speedo Spider” is a thematic companion to Hollywood Makeout’s preceding EP, “Bikini Bat,” insofar as the listener contemplates unflattering swimwear while enjoying a bottomless umbrella drink on the shoreline of his soul. – Troy Reimink
Website: www.facebook.com/HollywoodMakeout
Upcoming Show: Aug. 13 at Creston Brewery in Grand Rapids
Listen: “Wheelhouse” 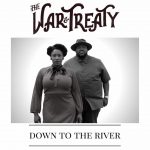 The War & Treaty
“Down to the River”

Every once in a great while, some voices emerge on the music scene that take your breath away and raise those little hairs on the back of your neck. Michael and Tanya Trotter are just such voices, a married couple who turn their passion for each other into full-bore musical fire on stage and in the studio, unfurling soul- and gospel-infused indie-folk and Americana that grabs hold and won’t let go as it carries you merrily downstream. From the opening salvo of the title track, “Down to the River,” it’s clear that singer-keyboardist Michael and singer-percussionist Tanya mean business in an uplifting and wholly captivating fashion, carving out their own take on the somewhat similarly named The Civil Wars. That they hail from the tiny hamlet of Albion and feature a guy who learned how to play keyboards in war-torn Iraq on a piano once owned by Saddam Hussein, just makes the musical story more intriguing … and builds excitement for what the next chapter might bring. – John Sinkevics
Website: thewarandtreaty.com
Upcoming Shows: Aug. 5 at Otus Supply in Ferndale; Aug. 12 at Arcadia Ales in Kalamazoo as part of the Riversedge music series; Nov. 22 at SpeakEZ Lounge in Grand Rapids for Local Spins Wednesdays.
Listen/Watch: “Down to the River” (Official Video) 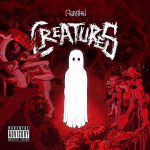 Antighost’s latest release is full of stark imagery and societal commentary right from the track list, with titles such as “The Lunar Months,” “Death by Surveillance” and “March of the Creatures.” The Grand Rapids punk/alt-rock group’s opening track begins deceivingly soft in instrumentation with only vocals and soft guitar-picking, but gets right to the point with dark statements about the state of the world before the full band roars in to crush the listener with overdriven guitars and pounding drums. “Walking in the Dark,” meanwhile, brings a familiar sound, reflecting a bit of Nirvana and Toadies. The versatility of this band is really showcased on “A Love Letter to an Alien Nation,” where guitars swell with a pulsing melody on top of distant, lo-fi drums and vocals that flow with one another to create a soundscape that is dreamlike and melancholy. The album ends with the track “Lullaby,” featuring female vocals that imply the destination is far off and calling for sleep. A quiet, clean guitar accompanies her, and the album ends the way it began, with a whisper. A well-rounded album that exudes a sense of completeness, “Creatures” expands beyond its roots in grunge and punk to incorporate ambient textures while driving home strong themes. – Schyler Perkins
Website: https://antighostmusic.wixsite.com/antighost
Upcoming Shows: Aug. 22 at Club Above in Ann Arbor
Listen: “Ugly World”