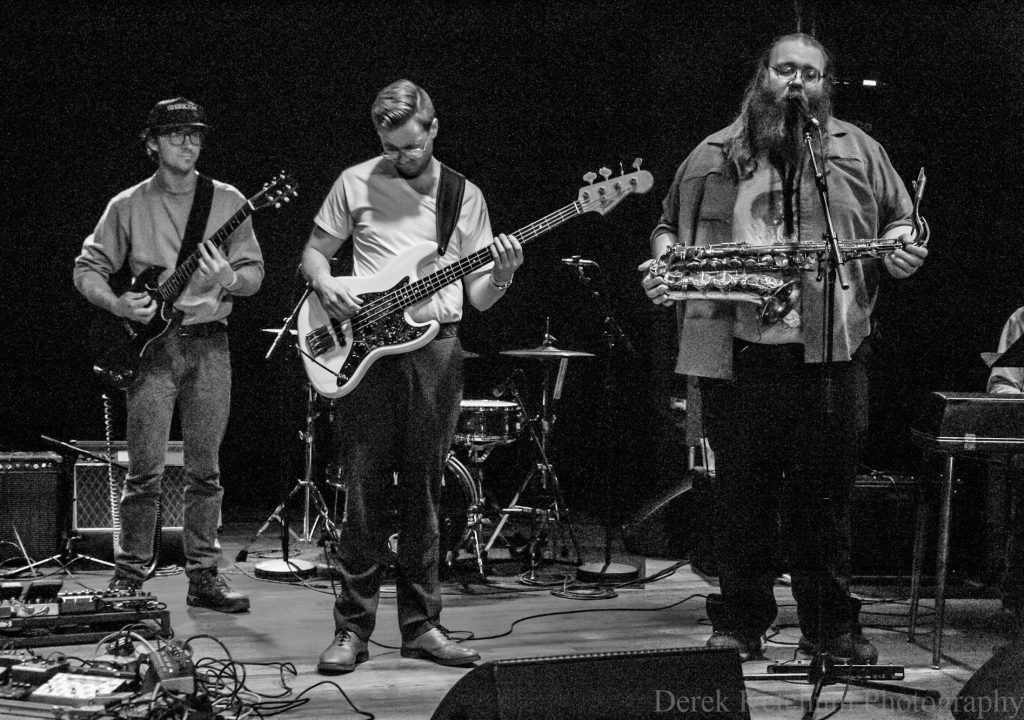 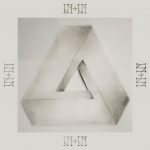 Grand Rapids singer-songwriter Kyle Rasche’s Chain of Lakes project takes a more ambitious step forward with “In&In,” moving well beyond his pared-back, spare and gorgeous folk with a full-band-flavored project that’s rife with a folk-rock, Americana and pop vibe, plentiful harmonies, uptempo foot-tappers and poignant balllads. The studio cast includes the likes of Mat Churchill, Joshua Davis, Christian VanAntwerpen, Jordan Griffis, Eric Ellis, Dana Jackson and Kyle VanderVeen – all adding masterful touches to this collection of songs about preserving relationships and love through difficult times. One thing hasn’t changed: Rasche pens well-crafted songs with lyrical depth, propelled by vocals that have made him an in-demand singer and collaborator with other West Michigan artists. Part of the enhanced milieu on this album (recorded by Greg Baxter at Second Story Sound and Peter Fox at Stone House Recording) stems from Rasche’s work in writing material for a Brooklyn pop-rock band, labor that produced the charming and hook-filled “I Swear” and “Cheers!” But it also speaks to what Rasche concedes is an obsession “with what makes a song great” – crafting solid material that holds up whether it’s backed by a full band or played solo on guitar or piano. In that, he’s succeeded brilliantly. – John Sinkevics
Website: http://www.chainoflakesband.com/
Upcoming Shows: May 16 at SpeakEZ Lounge in Grand Rapids
Listen: “I Swear” (First song in this Local Spins on WYCE podcast) 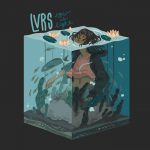 LVRS
“Now is Light”
Like drifting into an ethereal dream-like state, the LVRS debut album “Now is Light” lulls its listener into another dimension, where warbly guitars swim through deadpan drumbeats while shoegazey vocals dance wistfully above lush, sonic clouds. The Jackson band opens its latest release with “Captive,” rife with surf-rock vibes and groovy guitar hooks, creating an instantly admirable sound, both familiar and fresh. Growing heavier, “Fragment” smolders with searing guitars and muscular drums. The collective displays its compositional abilities with a masterful use of space and musical patience. Between roaming instrumentals, vocalist Olivia DeJonghe sings a longingly beautiful melody to counterpoint the charged soundscape. Other album highlights include “Wilflowers,” a rhythmic voyage further intro the musical land of LVRS, as well as “Bad Taste,” a subdued and delicate sentiment, along with the title track, “Now is Light,” brimming with organ, acoustic guitar and resounding drums. The finale is bright, but even still, DeJonghe’s voice and storytelling illuminate and uplift the entire track. Although still getting acquainted with listeners, LVRS exemplifies the sound and image of a band already primed for the national stage, especially wielding this album. – Ricky Olmos
Website: https://www.facebook.com/LVRSmusic/
Upcoming Shows: May 26 at Hartland Performing Arts Center in Howell
Listen: “Wildflowers” 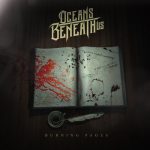 Oceans Beneath Us
“Burning Pages”

The debut release from Oceans Beneath Us hits hard on all cylinders. Self-described as “melodic metalcore,” the Kalamazoo band is exactly that throughout the six-song EP as they shift gears from primal screaming to soft, beautiful keyboard solos and audible, heartfelt lyrics filled with introspective aggression. Thematically, the band — Trent Kellogg on vocals, David Pobuda and Zackery Peak on guitar and vocals, David Hall on bass and Ken Boss on drums —is full of angst, but it isn’t of the teenage sort. In songs like “Aware” they stare suicide right in the face with a spoken-word pronouncement (“Dear friends and families, this is the end, this is my last good-bye”) and sung lyrics (“Why weren’t you there for me, you know that this all wrong, you know that this is painful now”). Other cuts like “Take a Bow” remind of a mix of old-school Tool and Slayer with hard-hitting lyrics (“Take a bow and think about, think about what you’ve done, to me and everyone around you.”) The changes in pace on the album, which was mixed and mastered by Angelo Kim, are reminiscent of more modern metal bands such as August Burns Red and We Came as Romans, and it comes off as a well-rounded effort covering relationship-fueled frustration (“Burning Pages”), politically-fueled numbers (“In Veins”) and the aforementioned themes. – Ryan Boldrey
Website: https://www.facebook.com/OceansBeneathUs/
Upcoming Shows: April 20 at Papa Pete’s in Kalamazoo (with Heartsick, Laurentian Tides and Far Away); April 22 at 36th Street Lounge in Wyoming (with Hallow Point, Silence & Solace and Last Sleep); April 27 at Simon’s After Dark in Allen Park; May 26 at Papa Pete’s in Kalamazoo
Listen: “Burning Pages” 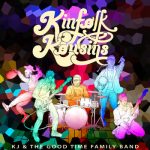 “Good time,” indeed. This appropriately named Grand Rapids band oozes a good time feeling throughout its full-length debut album (after releasing a seven-song EP in 2016) – from the funky, wah-wah pedal grooves of “En Ma Head” to the soulful rock of “Fantasies” and “Hands in the Air.” The group led by guitarist and singer Kurt “KJ” Johnson II not surprisingly lists Funkadelic, Red Hot Chili Peppers and Sly & The Family Stone among its influences and hints of all those artists weave their way into the 10 tracks on this project recorded and mixed by Ben Abid. The band – Johnson, Scott Dickson, Jason Peterman, Elliott Truss, Zach Scherphorn – even gives a funky nod to a holiday classic, “Santa Claus is Comin’ to Town,” making this record good for all-season grooving. – John Sinkevics
Website: https://www.kjandthegoodtimefamilyband.com/
Upcoming Shows: April 6 on the air for Local Spins on WYCE (88.1 FM); April 11 at Wealthy Theatre in Grand Rapids
Listen: Keep On (Keepin’ On) 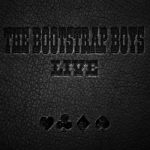 It’s no surprise that the sort of rollicking, honky-tonking, vintage and outlaw country music that The Bootstrap Boys crank out would fare best in a live setting – in boot-stomping, heel-kicking, glass-tipping, fist-pumping, beer-spilling fashion. This epic 15-track representation of the Grand Rapids band (recorded last October at Founders Brewing Co.) roars down the rails at a lickety-split pace with enough twang and drawl to fill a saloon full of beer, led by singer-guitarist Jake Stilson. The collection, of course, boasts a healthy dose of the band’s classic originals (“Poverty Line,” “’57 Chevy,” “Bootstrap Anthem,” “You and Me and the Whole Earth’) but also wholly appropriate covers of Johnny Cash’s “Folsom Prison Blues,” the Soggy Bottom Boys’ “Man of Constant Sorrow” and more. – John Sinkevics
Website: http://thebootstrapboys.com/
Upcoming Shows: 9:30 p.m. Thursday (March 28) at Founders Brewing Co. in Grand Rapids (CD-release show); May 5 at Iron Fish Distillery in Thompsonville; May 18 at Creston Brewery in Grand Rapids; June 3 at Cedar Springs Brewing in Cedar Springs; June 8 at The Pyramid Scheme (for a 1968 tribute, playing Johnny Cash’s “Live at Folsom Prison” album)
Listen: “Bootstrap Anthem” 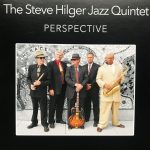 When you bring the likes of keyboard player Steve Talaga, drummer Randy Marsh, saxophonist John Gist and bassist Charlie Hoats together, the results are liable to be exemplary, captivating and downright electric. Such is the case with guitarist and synth player Steve Hilger’s latest studio project, which assembles several of West Michigan most respected, in-demand jazz players for a seven-song exploration of contemporary and classic jazz, interpreted in scintillating fashion. Starting with a powerful and rousing rendition of Miles Davis’ “Footprints,” these guys work their way impressively through Davis’ “So What,” Victor Young’s “Stella By Starlight,” Herbie Hancock’s “Watermelon Man,” George Gershwin’s “Summertime” and more. Recorded at Otsego’s McDonald Productions, only one track on this album clocks in at under 7 minutes and three are 10-minutes-plus in length. But the beauty of it is, listeners won’t mind one iota. – John Sinkevics
Website: http://www.hilgerband.com/jazz-quintet
Upcoming Shows: Friday at JW Marriott in Grand Rapids (Steve Hilger Trio)
Listen: “Watermelon Man” 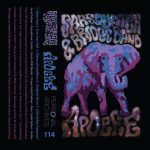 The word “apogee” has two definitions, “the highest point in the development of something, the climax or culmination” as well as “the point in the orbit of the moon or a satellite at which it is furthest from the earth.” Both definitions seem to fit the name of Kalamazoo’s Saxsquatch & Bridge Band’s sophomore release, “Apogee,” a five-song EP released in early March. The quartet — led by saxophonist and vocalist Jarad Selner, with ‘Cousin’ Will Benoit on drums and Selner’s brothers bassist Jakab Selner and guitarist Jarab Selner — has no doubt hit its highest point as a band, figuratively as well as literally: Since the recording of the EP, the latter two Selners have moved on to other educational and musical pursuits, making way for bassist Matthew Milowe (Cold Mountain Child, Less is More) and guitarist Andrew Watson (Lushh). Honing in on the other definition of “apogee,” a spin of the original lineup’s culmination no doubt takes listeners on a space-infused saxophone-driven trip that recalls “Division Bell”-era Pink Floyd at times, and at others, early Zappa or late-period Coltrane. Instrumental tracks “Dirty Dan” and “Das Jass Bah” kick off the lengthy EP, setting a solid groove out of the gate with a little bit of jazz fusion and hints of funk and ’90s alternative. The album’s centerpiece, “Natural Satellites,” which features a guest appearance by The Mainstays’ Tom Eldred on Hammond organ, takes an upward swing, providing the first opportunity to hear Selner on vocals as he riffs on remote northern Michigan, satellites in the sky and a hint of desire and romance. Selner takes to the mic again on “Shallow Diver” before the EP concludes with “600 Dollar Squeeze,” a lengthy Floyd-esque instrumental jam that transitions into a cover of Son Drop’s uplifting “Way Up” to close things out with a nice poppy feel. It all further exemplifies the diversity of a band that’s continued to show its maturation on the Kalamazoo scene over the past couple of years. “Apogee” was recorded, mixed and mastered by Mike Schuur at Son Spot Studios in Kalamazoo and released on Personal Archives Records. – Ryan Boldrey
Website: http://bridge-band.com, https://www.facebook.com/SaxsquatchNBridgeBand/
Upcoming Show: June 1 at Final Gravity Brewing in Kalamazoo
Listen: “Dirty Dan”