Back for 2022: Ralston Bowles, left, and Elijah Russ will perform on different nights for Tuesday Evening Music Club. (Photo/Derek Ketchum)

Frederik Meijer Gardens & Sculpture Park has followed up announcement of its biggest main concert series in history with the biggest lineup of regional stars ever showcased for its popular Tuesday Evening Music Club.

Previously only staged in July and August, the 2022 edition of the Tuesday night series will now kick off on June 7 with Kalamazoo hip hop cellist Jordan Hamilton and Grand Rapids’ Elijah Russ Collective and continue for 12 more weeks with an eclectic array of local and regional bands.

Some of the Michigan music scene’s most recognizable names – The Accidentals, Seth Bernard, Molly, The Last Gasp Collective and Ralston Bowles – will be joined by up-and-coming acts such as Myron Elkins & The Dying Breed, Melophobix, Whorled, Lana Chalfoun and King Possum as part of the Tuesday night lineup. Admission to the 7 p.m. Tuesday shows is free for Meijer Gardens members, or the regular Meijer Gardens entry fee for non-members. Many of the family-friendly shows fill to capacity, especially on sunny evenings, with visitors allowed to stroll the gardens and sculpture park.

Veteran Grand Rapids singer-songwriter Bowles, who started and hosts the series, called it an outstanding lineup for 2022, with a particular buzz surrounding the special Aug. 9 concert featuring The Accidentals with the Kaboom Collective Studio Orchestra.

The nationally acclaimed Traverse City alt-folk trio will team up with this one-of-a-kind youth orchestra as they promote an upcoming collaborative album, “REIMAGINE,” that offers fresh takes on Accidentals music. 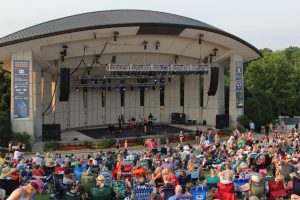 “This is a project they’re working on with a number of young, aspiring orchestra people,” Bowles said, noting the orchestra will travel with The Accidentals to nine different cities across the country. “That’s going to be an amazing show.”

The series boasts some intriguing double bills – the funky Melophobix with The Soul Syndicate on June 28, The Last Gasp Collective with Myron Elkins & The Dying Breed on July 5, Whorled and CrossBow on July 12, and Samuel Nalangira Trio with Sharon Katz on July 26.

Older fans will also celebrate the return of oldies bands The 6 Pak (an all-female group formed in 1967) on July 19 and Franklin Park on Aug. 16.

And like last year, the series will wrap up with the traditional “Ralston & Friends” show on Aug. 23, followed by Grand Rapids Ballet on Aug. 30. Get more info online here.

Meijer Gardens previously announced a record number of concerts — 33 — for its main concert series featuring national touring acts. Many of those shows already have sold out in a pre-sale to Meijer Gardens members. Tickets go on sale to the general public on May 7.