With the Grand Rapids band rocking Local Spins’ 10th anniversary celebration in May, frontman Joe Bockheim today reveals the albums that most influenced him. Listen to tracks from all of his picks. 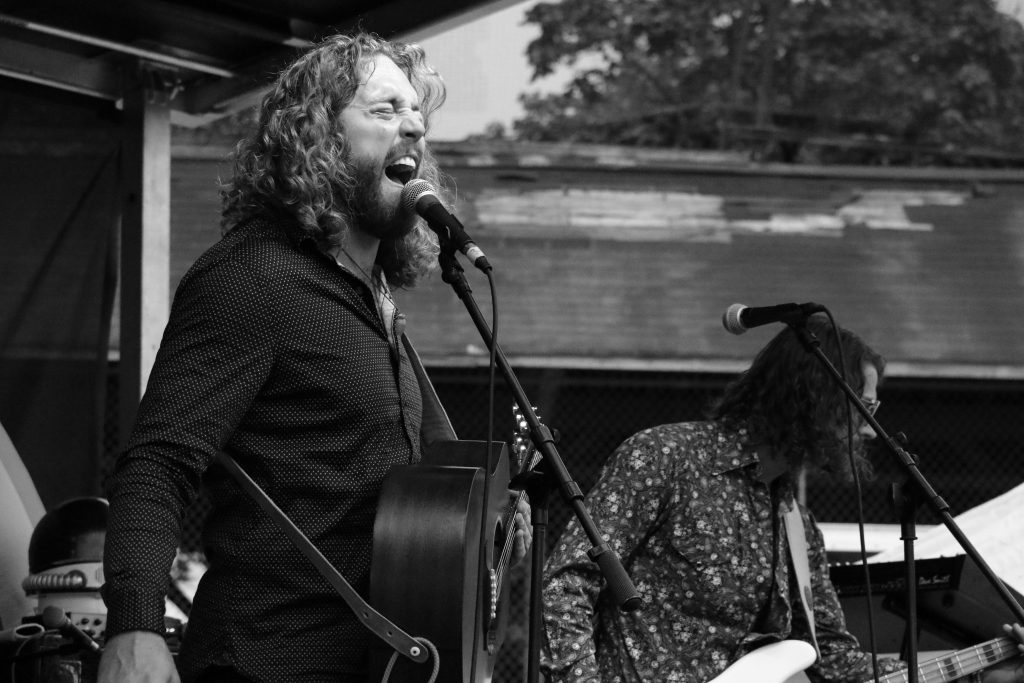 EDITOR’S NOTE: All musicians can trace their inspiration to key recordings that captivated them and influenced their careers. Writer Ross Boissoneau today showcases recordings that changed the world for Grand Rapids’ rocker Joe Bockheim, leader of The Legal Immigrants. Scroll down for a Spotify playlist of his picks along with a couple of tracks from The Legal Immigrants.

For over a decade, The Legal Immigrants have showcased their unique sound across the country and the globe. Frontman Joe “Boots” Bockheim says a tour of Australia in 2019 was a highlight, but this rocking crew seemingly has a blast every time they hit the stage.

“We’ve been at it since 2010. We’ve had some lineup changes, a few records, toured the U.S., gone as far as Australia right before the world ended,” he says, referring to the pandemic shutting things down across the world.

The band’s latest recording should be out soon, but that’s a relative term. It was recorded almost two years ago, but hasn’t made it out to the public yet. When it does appear, he promises it will engage fans with the band’s amalgam of rock, punk, even some folksy strains. “We never chased a style,” he says proudly.

We caught up with Bockheim to find out about his biggest influences over the years. The Legal Immigrants join Grand Rapids jam band Desmond Jones on May 20 for a late show at Elevation inside The Intersection as part of Local Spins’ 10th Anniversary Celebration week. Get tickets, $10, online here. 1. The Beatles, “Magical Mystery Tour” (1967) – It was so out there. Wild lyrics, wild sounds. “I Am The Walrus” knocked my shoes and socks right off my feet. It was a paradigm shift. “I am the egg man,” that’s so cool. “Sitting in an English garden, waiting for the sun.” I know what it feels like to wait for the sun (laughs). The wild (music), string arrangements; they’ve never been overrated.
Listen: “I Am the Walrus” 2. Led Zeppelin, “IV” (1971) – They were all rock, electric blues. Robert Plant’s wild howling blew me away. I was crazy into Zeppelin for a long time. I was obsessive about the first five records. They destroyed my brain. I don’t listen to Plant so much now, but his albums with Alison Krauss are great records.
Listen: “Black Dog” 3. The Raconteurs, “Consolers of the Lonely” (2008) – I’ve always loved Jack White and The White Stripes. Jack White and The White Stripes and Beck were my two favorite acts, and the Stones: They weren’t too busy, multi voices. That true rock ‘n’ roll is what draws me in. This album, with White and Brendon Benson on guitars, was the epitome of a true rock ‘n’ roll band. When they went to Australia, there was already a band there called the Raconteurs, so they called themselves the Saboteurs (laughs).
Listen: “Consoler of the Lonely” Currently Loving: Geese, “Projector” (2021) – When a song destroys me I get obsessed for at least 48 hours. I listen intently over and over. Right now I’m obsessed with a band from Brooklyn called Geese. A friend turned me on to them. They’re opening for Jack White. They’re like 19, just out of high school. They did a live performance on WGN that’s on Youtube. These dudes are teens. It’s cool.
Listen: Geese (Live on WGN)

ALBUMS THAT CHANGED THE WORLD: Joe Bockheim’s Playlist on Spotify