Highly regarded Michigan guitarist Larry McCray plays Listening Room in Grand Rapids tonight as he tours behind his latest studio album. Today, he reveals the albums that shaped his own music. 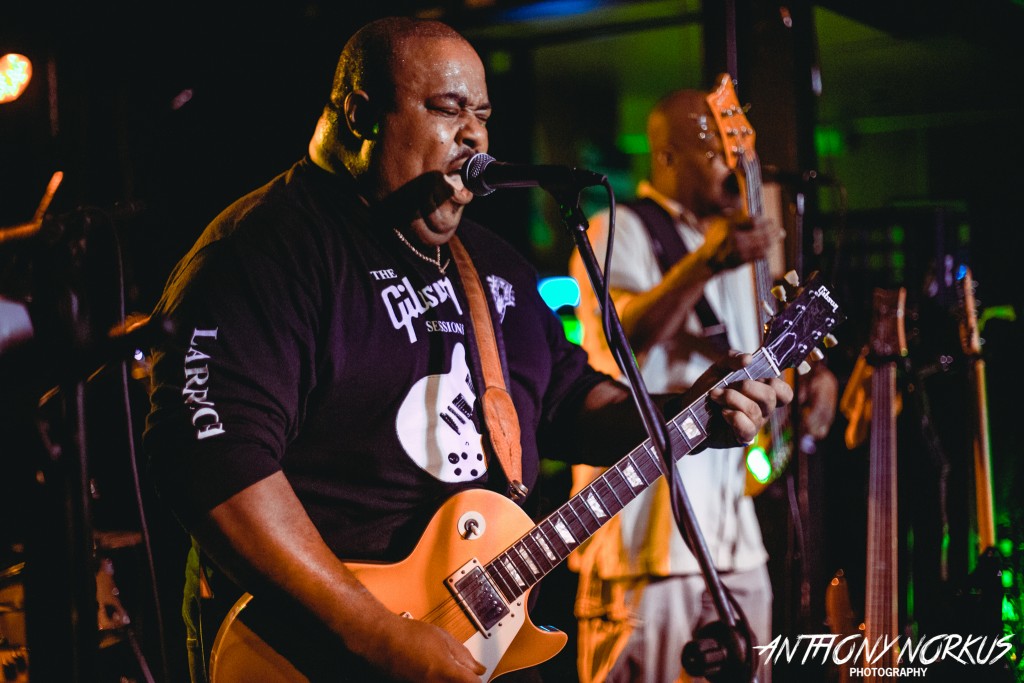 EDITOR’S NOTE: All musicians can trace their inspiration to key recordings that captivated them and influenced their careers. Writer Ross Boissoneau today showcases recordings that changed the world for Saginaw-based blues/rock guitarist Larry McCray. Scroll down for a Spotify playlist of his picks along with a couple of tracks from McCray’s brand new studio album.

Over his more than three decades of nonstop touring and recording, Larry McCray has played and/or shared the stage with the likes of Dickey Betts, Keb Mo, Joe Walsh, Buddy Guy, Johnny Winter, Albert King, B.B. King and scores more. He bemoans the lack of recognition of the classic American art form he practices, from the way it’s treated at the Grammy Awards to its play (or lack thereof) on radio.

“How could you have American music without blues and jazz?” he asks rhetorically. “If you play blues, you’re certainly not going to get recognition.” He says the lack of recognition sometimes makes him feel like those who enjoy those forms really don’t count. “There’s a small group of faithful (fans) who keep that music alive.”

Fortunately, among them is McCray himself. He’s an award winner (Orville H. Gibson Male Blues Guitarist of the Year and Top Guitarist in International Blues Matters, among others) and has released a number of albums, the latest of which came last month: “Blues Without You” on KTBA Records and co-produced by Joe Bonamassa. (Check out the Local Spins album review.)

McCray and his talented band play Listening Room in Grand Rapids at 7:30 p.m. tonight (Tuesday, May 3). Tickets are $35 and available online here. 1. George Benson, “Breezin’” (1976) – My selections are very diverse. This one was a game-changer for me. I started playing guitar seriously at 12. By the time I found this I was a teenager, 16 or 17. I had been playing blues five or six years. When I heard his sound, that was something totally different, a breath of fresh air. Not only could you play bluesy, but jazzy, too. 2. Albert King, “Live Wire/Blues Power” (1968) – In my opinion, Albert influenced a whole generation. Everybody thought of Eric Clapton (as a great blues guitarist), but he learned from Albert and Freddie King. There’s never been anyone like Albert. I think he was the most influential blues player for electric guitar. When Stevie Ray Vaughan got popular, you’d play an Albert King lick and people would say you’re playing Stevie Ray Vaughan. 3. Candi Staton, “He Called Me Baby” (from “Stand By Your Man,” 1971) – I think Candi Staton (Alabama’s Canzetta Maria Staton) had one of the greatest soul voices of all time, but she’s unrecognized. She had a great voice, comparable to Aretha or Gladys, but didn’t have their success. She was very powerful. She took Patsy Cline’s song (originally written by Harlan Howard in 1961 as “She Called Me Baby”) and turned it into one of my favorite blues songs. It’s so meaningful. Currently Loving: Bobby Parker, “Shine Me Up” (1995) – He is like the godfather of go-go. He and Chuck Brown created the go-go scene. This is really funky go-go. Another great song of his was “Watch Your Step.” Jimmy Page loved Bobby Parker and wanted him to join Led Zeppelin, but he (Parker) was afraid of flying. He had a unique style, really funky.

ALBUMS THAT CHANGED THE WORLD: Larry McCray’s Playlist on Spotify