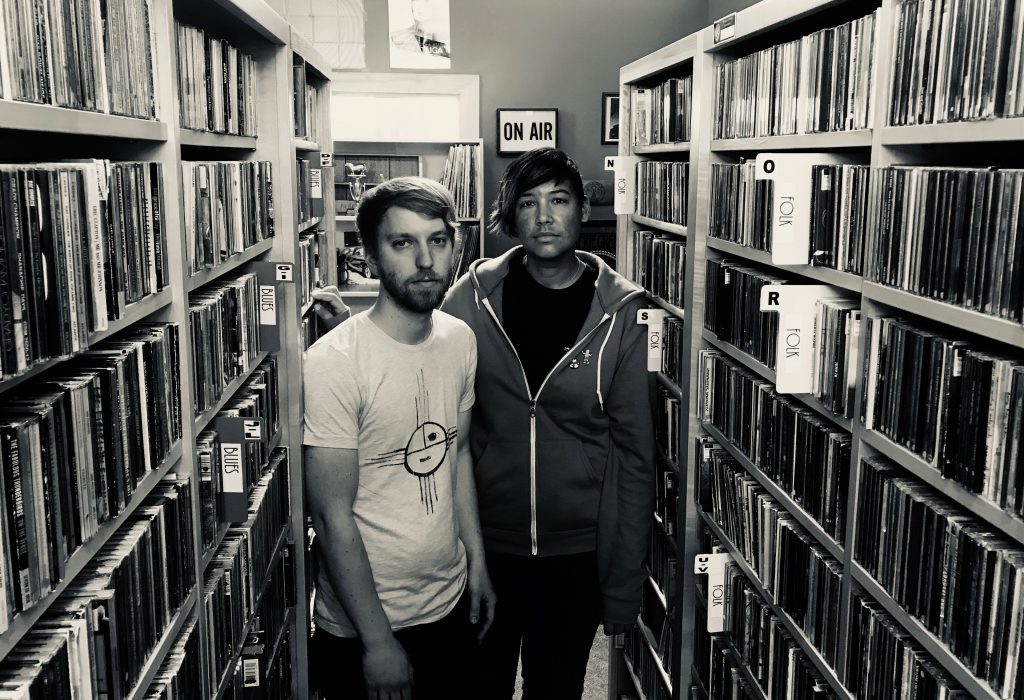 The name of the Grand Rapids band How to Live Together says a lot about how this synth-pop duo was formed.

After Jesse Kaczmarczyk and Steffanie Rosalez bought a house together in Grand Rapids, they used their exploration of digital and analog synthesis and creation of synth-pop songs as a way of “figuring out how to live together.”

As they put it, “sampling lighthearted Nintendo blips while creating dark analog songs” paralleled the growth of their own relationship and “the joy and the dysfunction of being an interracial couple in the current cultural landscape of race, gender, politics, the internet and social norms.” 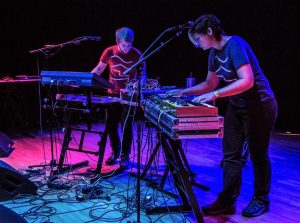 Live Instrumentation: How to Live Together on stage. (Photo/Derek Ketchum)

The album they released earlier this year, “Resister,” reflects “the process of resisting social and cultural norms, and also for the internal electrical component of every synthesizer they used to compose the songs.”

“We explore the joys and dysfunction of being an interracial couple in our current cultural landscape through our love of synthesizers,” Kaczmarczyk said.

“We play it all live with many synths on stage including modular synths and Nintendos. We also bridge groups of songs together with improvised mini-tracks for a more seamless performance. Our music can be fun and upbeat with heavy and meaningful lyrics.”

The duo demonstrated that intricate approach for this week’s edition of Local Spins on WYCE, performing the songs “Hidden Costs” and “Sunday” on the air. Watch the video for “Sunday” here and check out the full radio show podcast below.

VIDEO: How to Live Together, “Sunday” (Local Spins on WYCE)

How to Live Together is part of Synth Night Vol. 3, which takes place Friday night (June 14) at The Pyramid Scheme in Grand Rapids, with Mega Powers, Mel*N and Primer also on the bill. Doors open at 8 p.m.; tickets for the 21-and-older show are $10 at the door. Details online at pyramidschemebar.com.

A self-professed “synth-usiast,” Rosalez introduced Kaczmarczyk – who had played guitar for about 10 years – to the joys of synthesizer-based music.

Rosalez never learned to play an instrument, so she was a bit discouraged about making music until she got her hands on a drum machine and synthesizers. 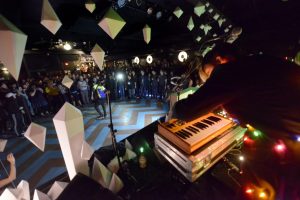 Returning to The Pyramid Scheme: How to Live Together (Photo/Katy Batdorff)

“You can make sounds that you want and manipulate sounds that other instruments can’t do,” she said. “It really kind of opened up the gateway for me to start playing music and writing songs.”

Their synth-pop unfurls with live instrumentation during their concerts, with both musicians intensely jockeying between keyboards, drum machines and samplers to create lush-sounding tracks.

“Because it’s more poppy and there’s more of a driving beat, it is kind of dancey,” Rosalez said. “We love to see people dance. But it’s also contemplative, so if people are listening intently, we always appreciate that.”

The duo will be performing every couple of weeks this summer, including house shows and an all-ages “synth and nature” show at Grand Rapids’ Blandford Nature Center on Sept. 6 as part of the “Bands at Blandford” series.

This week’s episode of Local Spins on WYCE – which showcases local and regional music at 11 a.m. Friday at 88.1 FM and online at wyce.org – also featured the on-air debut of new tracks by Molly, Lipstick Jodi, Boss Ruff, JC & The Disciples, Primer, Stef Chura and Jake Kalmink & Further Closer, as well as music from Funktion and Roosevelt Diggs. Listen to the full podcast here.