Based in Grass Lake, Mich., the Australian native and his band fired up Local Spins on WYCE, which also debuted tracks by The War & Treaty, Nicholas James Thomasma, Slumlord Radio & more. Video, podcast. 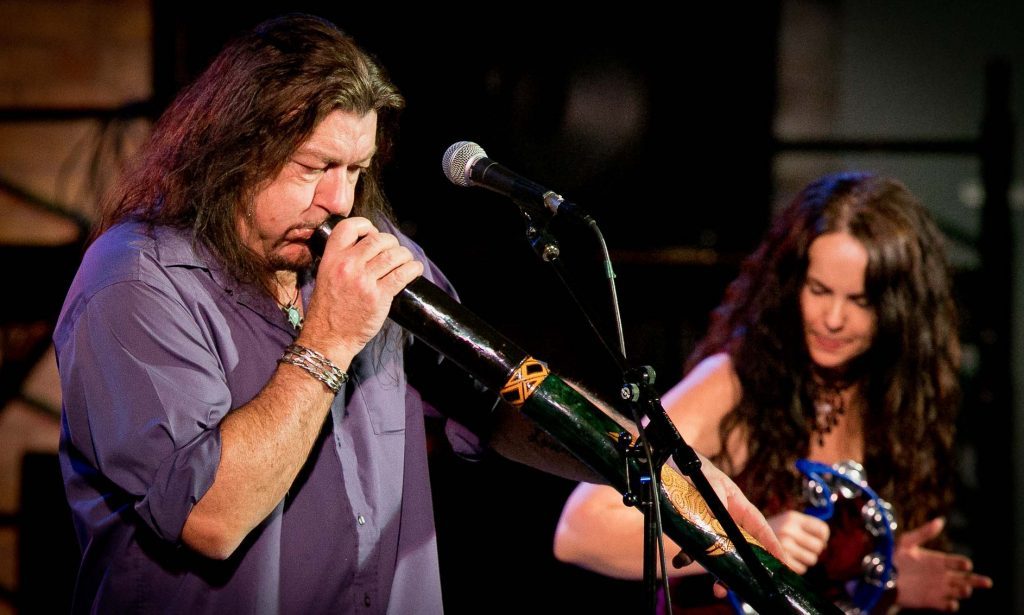 The Art of the Didgeridoo: Peter D. Harper on stage with Bobbi Llewellyn. (Courtesy Photo)

After releasing 10 albums, winning more than a dozen awards and crisscrossing the globe, multi-instrumentalist Peter D. Harper – frontman for Harper & Midwest Kind – is poised to release, “Rise Up,” which could be his most passionate, uplifting and attention-getting recording yet.

That he’s done this by adapting the woody, percussive didgeridoo from his native Australia to his bluesy, roots music while headquartered outside the tiny hamlet of Grass Lake, Michigan, makes it all the more intriguing. 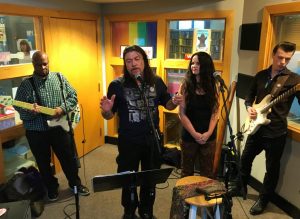 “We fell in love with the people here,” said Harper, who moved to the United States from Melbourne about 13 years ago after meeting a Detroit musician who encouraged the relocation.

“It was more about the people than anything else. They seemed like Australians to us, just a little less crazy. … We do tour a lot, so it doesn’t matter where you are. We cover the whole country.”

His Grass Lake home on 30 acres also means he can work on material such as songs for his new album in relative peace – and rock out, too.

“I can make as much noise as I want to,” he noted, adding that “it’s nice to get away from the touring and calm down … instead of continually playing all the time and bumping into people. It’s so quiet there, you can reflect on the stories you want to write.”

Watch the video for “Rise Up” here and scroll down for the full radio show podcast.

Although the new album officially gets released Feb. 11, West Michigan fans can get a preview when the band plays a CD-release show at 9 p.m. Saturday (Jan. 25) at Tip Top Deluxe Bar & Grill in Grand Rapids. Tickets are $10 advance, $15 day of show; details online here.

For Harper, who grew up in Perth and first fell in love with the blues before embracing an eclectic blend of styles (“from Al Jarreau to Led Zeppelin”), the diverse and rootsy music he creates has been an educational journey of sorts.

For instance, the singer and harmonica player said he took up the didgeridoo – a native Aboriginal instrument that requires “circular breathing” to play – after a musician in his band left for another project. He loved the sound of it so much, he said he felt he needed to keep it in the mix. 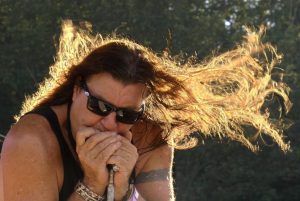 “My Aboriginal friends helped me buy the right one and taught me the breathing,” he said, adding it took “six months of stressful practice every day” to get it right. “You keep learning all the time. It’s like constant.”

Hailed for his “impassioned vocals and an equally emotionally laden harp” (Blues Matters), Harper’s new album is a follow-up to 2016’s “Show Your Love,” which soared to No. 3 on the Billboard Top Blues Albums chart.

“It’s about people getting together and having a voice. I couldn’t get away from that,” he offered.

“It’s time we all start making our lives better. It wasn’t a political thing at all, just that people should feel better about themselves and lift themselves up rather than feel that the world is against them.”

It also reflects Harper’s style-melding approach to his music.

“I’m taking influences from everywhere but I like to mash it all up together.”

The band follows up official release of the album on Feb. 11 with a tour of the Midwest and Florida before returning to Michigan to play the Rumpus Room in Chelsea on March 14.

The Jan. 24 edition of Local Spins on WYCE – which explores local and regional music at 11 a.m. Fridays on WYCE (88.1 FM) – also boasted the on-air debut of new tracks by The War & Treaty, Nicholas James Thomasma, ttypes and Biiko, Asamu Johnson & The Associates of the Blues (the musician’s pick by Harper), Slumlord Radio, James Lewis and Drinking Mercury, as well as music from Melophobix, Rob Mickey and Heaters. Listen to the podcast here.