The May 11 edition of Local Spins on WYCE boasted an in-studio visit by Melophobix, plus the premiere of new songs by Coffin Problem, Brant Satala, Brian Koenigsknecht and more. (Podcast, video) 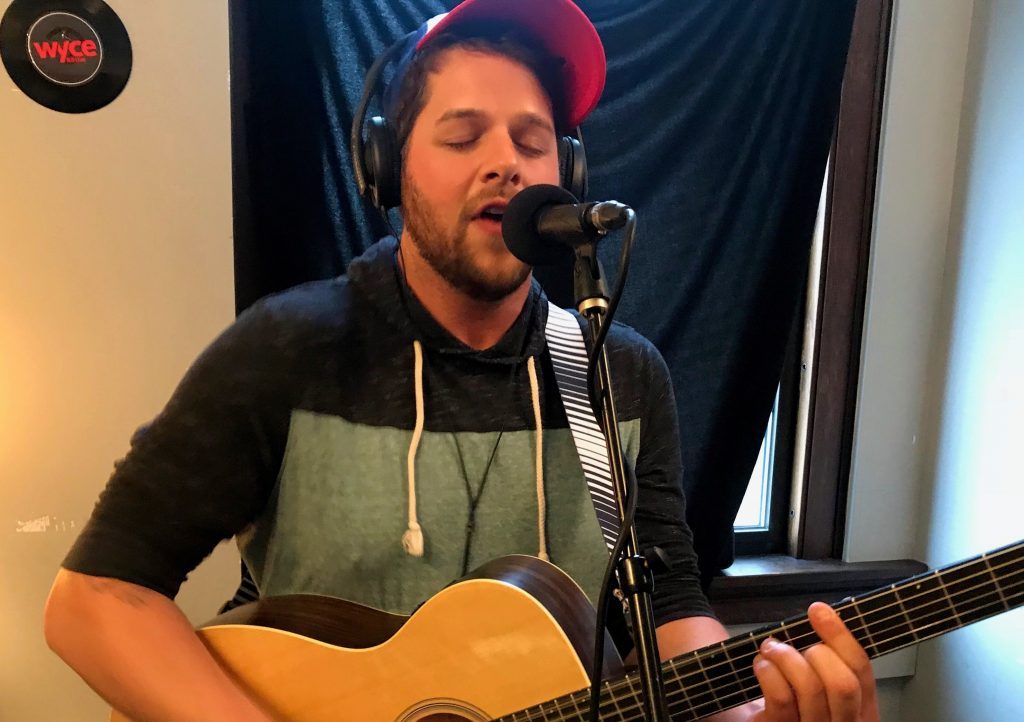 Hitting Their Stride: Stefan Schwartz and Melophobix are wrapping up work on a new studio album. (Photo/Local Spins)

When Melophobix released its first EP a couple of years ago, the fledgling, funky Grand Rapids rock band was mostly concerned about timeliness – just getting something out to fans.

But the eight-piece group’s next project is shaping up as a milestone recording. 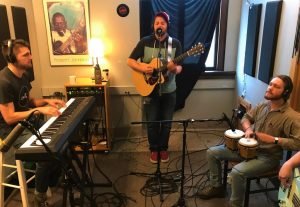 “We’ve been at it 100 percent of the time,” guitarist and singer Stefan Schwartz says of the songs being churned out at Third Coast Recording in Grand Haven. “This is taking us from the Melophobix that everyone’s known and loved the past couple of years to taking the next step up. … We’re more patient in the writing process, more critical and meticulous to really drill into a lot of the arranging and a lot of the parts.”

“We’re looking at it with wiser eyes and ears than we have with past projects,” added Schwartz.

The band unveiled two of those new songs for this week’s edition of Local Spins on WYCE, performing “Seatbelts” and “Schwartz Rot Gold” (with much of that song delivered in German) in Studio X. Watch the video for “Seatbelts” here with the full radio show podcast below.

The band hopes to release the new album in late summer or early fall as they line up producers and pull together new merchandise and more.

With influences ranging from a cappella vocal groups to the Grateful Dead, Melophobix concocts a funky stew of rock and more – something that takes on a vibrant life of its own during performances.

And the band has plenty of performances lined up for the spring and summer, including shows at Tip Top Deluxe Bar & Grill in Grand Rapids on May 18 (with Bigfoot Buffalo and Samfox), June 1 at Shakespeare’s Pub in Kalamazoo (with Trifocal and Quantum Fleek), June 8 at the Rockford Brewing beer tent in Rockford, June 15 at Unruly Brewing in Muskegon (with Tell Yo Mama), and June 16 at The Intersection (opening for Badfish).

Get more information about the band and details about its Kickstarter campaign online here.

The May 11 edition of Local Spins on WYCE not only introduced fans to fresh Melophobix material, but also debuted new tracks by Coffin Problem (which hosted an album-release show at The Pyramid Scheme on Friday night), Brant Satala, Brian Koenigsknecht (who stages a Grand Rapids CD-release show for his new album at SpeakEZ Lounge), Andrew Starr and Act Casual, plus songs from Paddlebots (this week’s musicians’ pick), Galactic Sherpas, Deep Greens and Blues, Conrad Shock + The Noise and The Legal Immigrants. Listen to the podcast here.