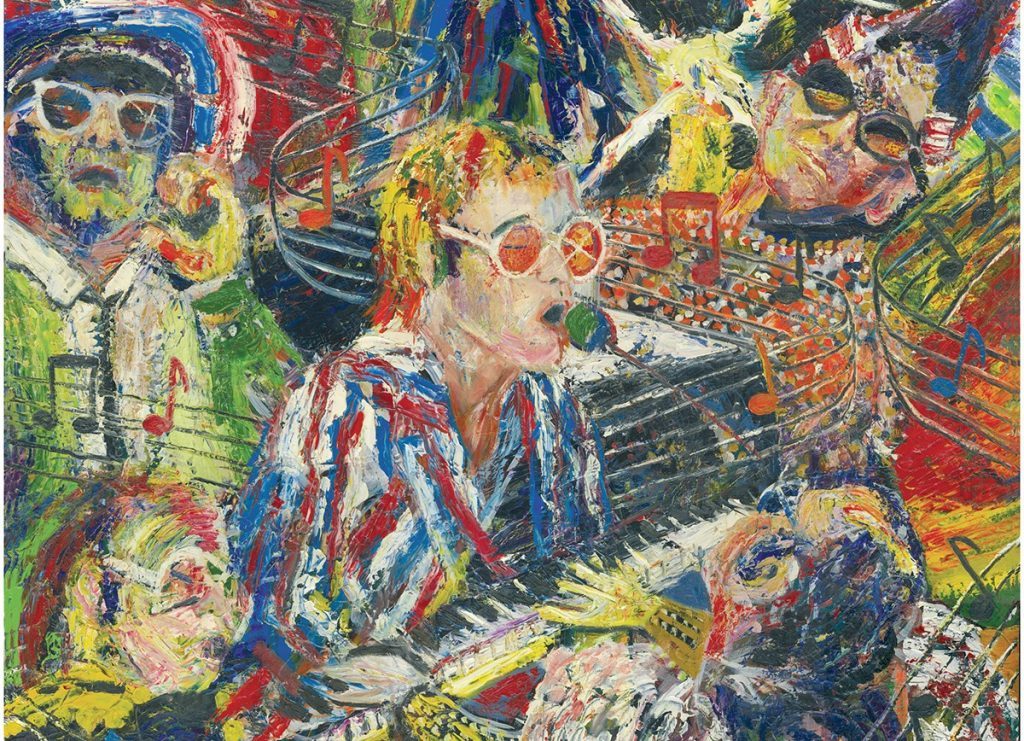 Elton John and lyricist Bernie Taupin started writing songs together more than 50 years ago, and their partnership has proved to be astonishingly successful: More than 50 Top 40 hits (including the best-selling single in history), 30-plus albums (including seven straight No. 1 releases) and 300 million records sold worldwide. 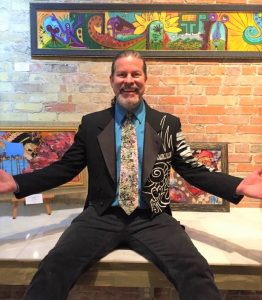 Grand Rapids artist Mic Carlson qualifies as one of West Michigan most devoted EJ fans, having traveled across the globe to see him more than 30 times since catching the rocker for the first time in 1982 at Pine Knob, when Elton “smashed his piano bench and threw the pieces into the crowd.” Carlson and his wife, Susan Evangelista, once caught 13 Elton concerts in 12 months, from Detroit to Italy.

The acclaimed artist also has created numerous paintings of the superstar and his band, with the album “Blue Moves” serving as “the most inspiring album when I start a painting.” Local Spins asked him to list his favorite Elton songs and why they’re special.

“It was really hard for me to pick a Top 10 list, because I like his latest record as well,” says Carlson, who actually picked 11 songs. “Elton always inspires, always making new records with so many musicians. It’s crazy! Google it. I have seen Elton over 30 times, maybe 40. I stopped counting. All his shows have been great. He always gives his music to the crowd just shy of three hours. I saw his ‘Peach Tree Tour’ and he played the whole record and then did his normal show. That was almost a four-hour show. It’s hard to believe he plays about 26 songs and you’re still wanting more. He truly is the ‘Madman From Across the Water’ and he continues to inspire me. I’ve done many paintings of him over the years and you can see them on my website micasso.com or Facebook and Instagram. My last painting/relief sculpture hangs in HopCat in Chicago as well as one in HopCat in Florida.”

1.) “Your Song,” from “Elton John” (1970) – “Your Song” is one of those classic songs that makes you reflect. I think Elton has played it at every show. He really draws you in. And if you are with your spouse and or friends when you hear it, you look at each other with a warm heart and smile. And the line “If I were a sculptor,” well, I AM.

2.) “Rocket Man,” from “Honky Chateau” (1972) – “Rocket Man” has always been one of my favorites. It’s a perfect blend of melody and lyrics. As an artist it really hits home for me. Super great concert song as well. I’ve seen Elton perform it in so many different ways. Never know what to expect with Elton with or without his talented band.

3.) “Mona Lisa and Mad Hatters,” from “Honky Chateau” (1972)– “Mona Lisa and Mad Hatters” is the best warm fuzzy song that is like an audio group hug. Taupin’s lyrics are always so esoteric and can mean different things to different people. But this song also inspires me when sometimes the road of an artist gets tough. And the lyric “And I thank the Lord, for the people I have found,” that’s when you high five or hug someone. ‘Honky Chateau’ is a classic album all the way through.

4.) “Dan Dare (Pilot of the Future),” from “Rock of the Westies” (1975) – This song is so funk/rock you have to crank it up for sure. Never seen it in concert. It’s a naughty song. I love it. Elton’s songs are made to listen to. They are not background music. The louder the better! There is always so much going on with great space. The depth of his songs and the range are so incredible. I can see why it’s tough to cover Elton. Look for the lyric, “I’ve never seen a rocket that was quite that size!” I don’t think this song is about a comic book hero. If you know what I mean.

5.) “Hercules,” from “Honky Chateau” (1972) – “Hercules” is just a fun rocker. I remember cranking this out and playing the back of my couch like it was a piano, totally wearing myself out. This video is awesome! The band is just getting down. I wish I would have seen Elton in the ’70s. Also, Hercules is Elton’s middle name. Enjoy, turn it up.

6.) “Levon,” from “Madman Across the Water” (1971) – “Levon” is a classic and to see this live with Ray Cooper pretty much shows you what an amazing piano player Elton is.

7.) “(Gotta Get a) Meal Ticket,” from “Captain Fantastic and the Brown Dirt Cowboy” (1975) – This song and lyric always connected with me. Being a commissioned artist, I always have to be out there, trying to get the next big job — meal ticket — and it rocks.

8.) “Ticking,” from “Caribou” (1974) -This is the last track on “Caribou” and I have great memories as a young lad listening to this song on my headphones. (Didn’t want to wake the parents). But when you listen to an album with headphones, you hear everything. It’s like you are right there in the studio with him. Elton works fast. I heard him say he never spends more time than 20 to 30 minutes to write a song. But this song is deep and the piano is so unique. It used to have me levitating, no kidding. This lyric by Taupin is straightforward with no play on words: It’s like a little dark movie. He played it at his solo show in 1999 at the Van Andel. The link is the studio version.

9.) “House,” from “Made in England” (1995) – “House” is just such a dreamy song and again Taupin’s lyrics really bring you in. Even Elton’s simple songs have so much emotion to offer. The album “Made in England” is a solid record front to back. I love every song, but “House” hold dear to my heart because my wife Susan’s mother, Wanda, cried her eyes out when she heard it. Never expected that, but what a memory to think of her every time we hear it. And she was 90 when she saw Elton solo at the Van Andel.

10.) “This Train Don’t Stop There Anymore,” from “Songs from the West Coast” (2001) – “This Train Don’t Stop There Anymore” never had to grow on me … liked it straight away. Another inspiring song that you can’t give up no matter what direction that curve ball comes from. Cross the line in the sand and keep on moving. I think “Songs from the West Coast” album, that sound has become the Elton sound that continues today.

11.) “Bennie and the Jets,” from “Goodbye Yellow Brick Road” (1973) – “Bennie and the Jets” is the great crowd go-getter from the opening note. Everyone knows it, so Elton deserves a Top 11. This video shows Elton playing underneath the piano and getting on the piano. Classic Elton concert with wardrobe and all. 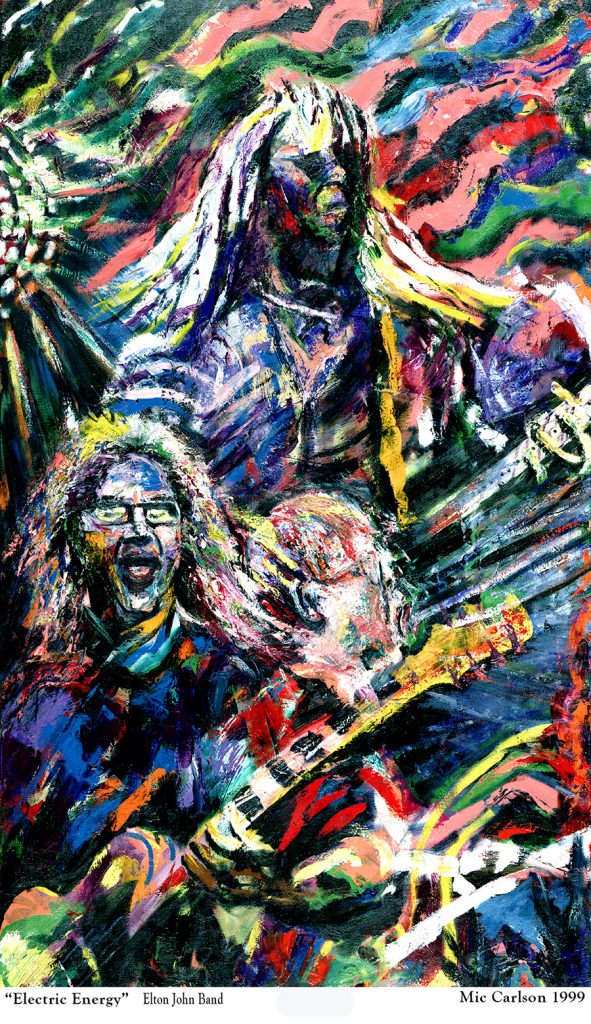 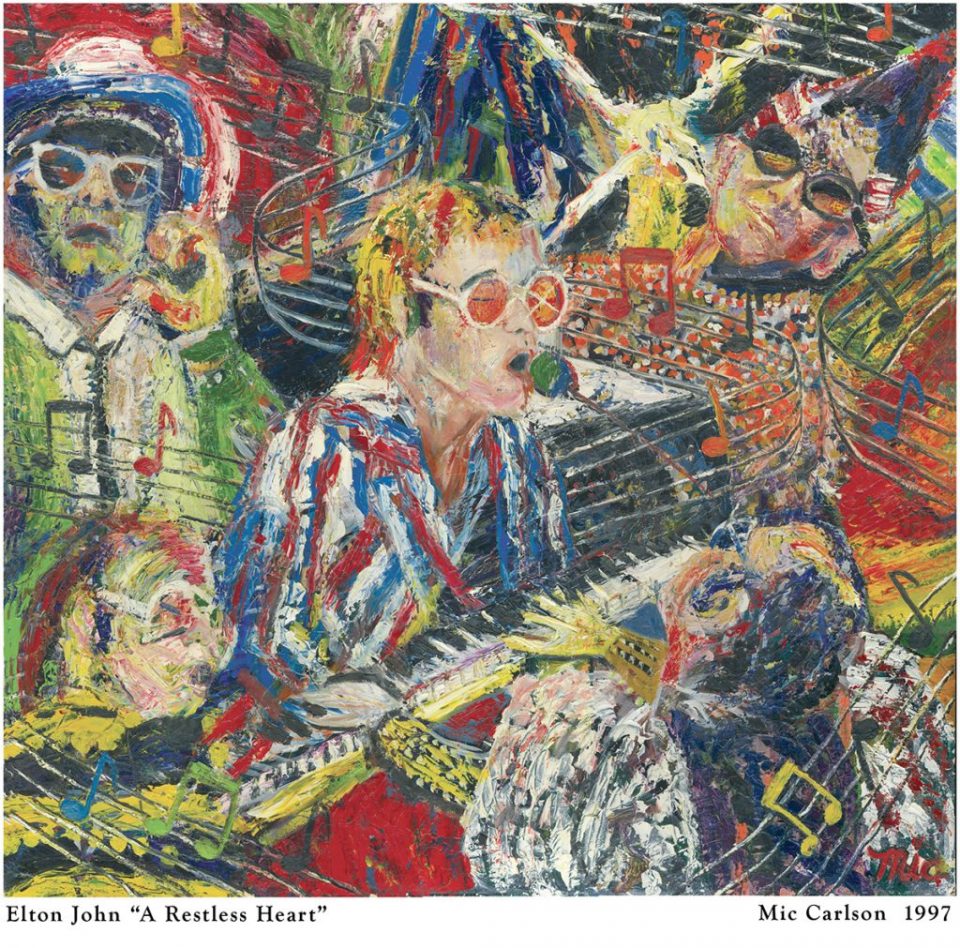 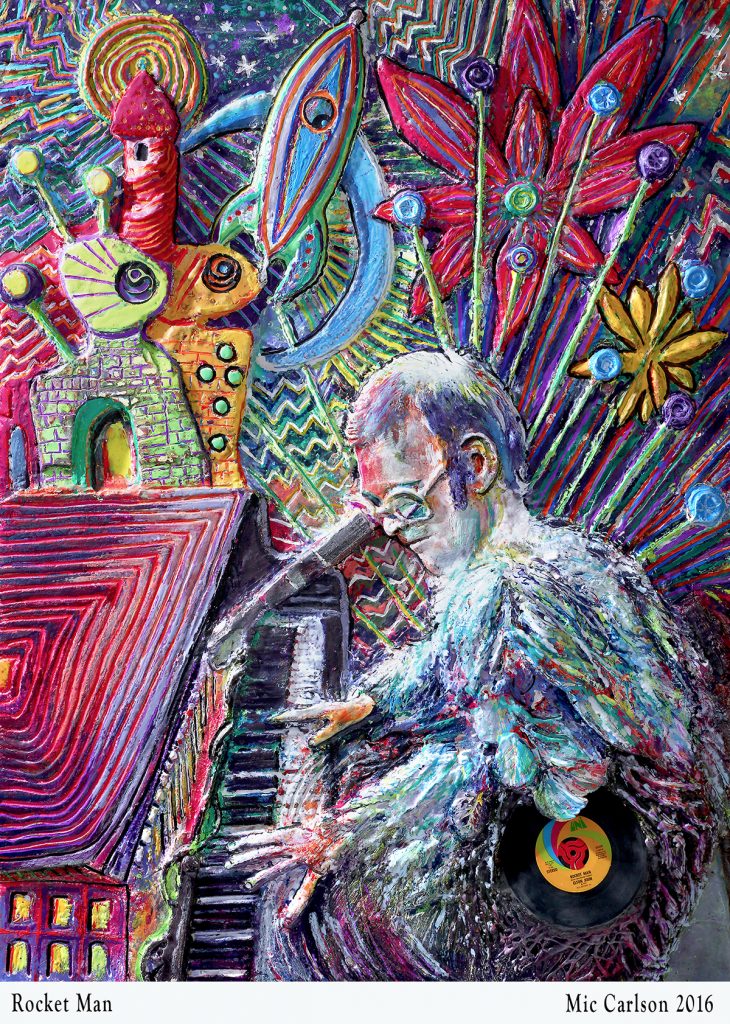