The Muskegon band with a new album on the way was this week’s guest for Local Spins on WYCE, which also debuted tracks by Desmond Jones, Dani Darling, marsfade, Edgar Hope & more. 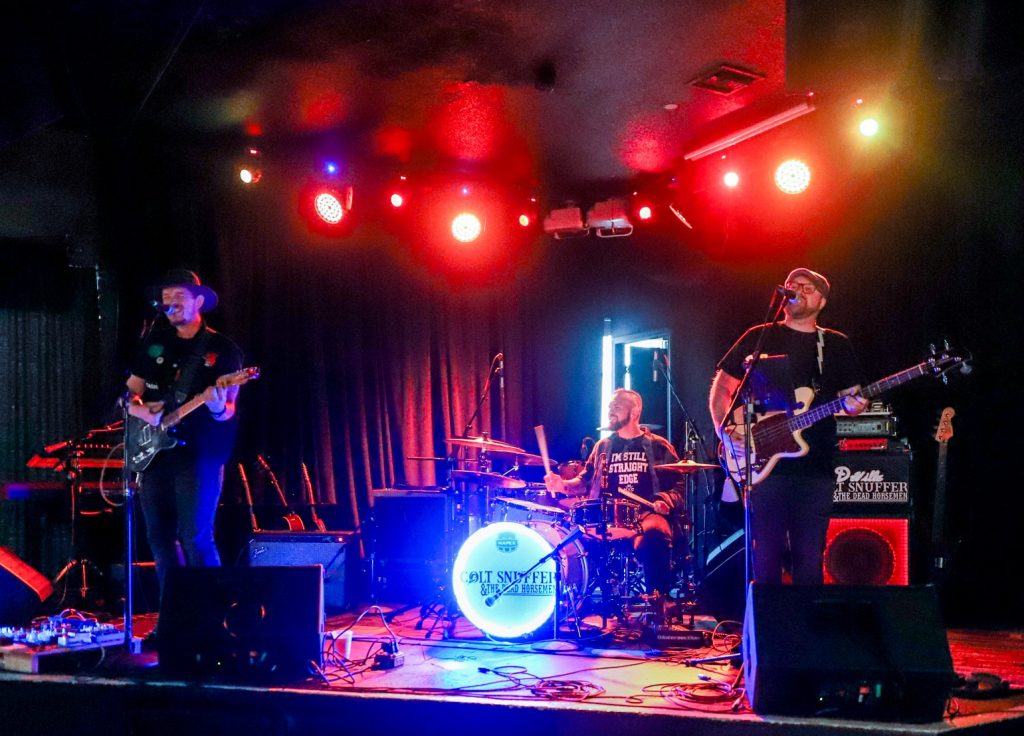 To hear Colt Snuffer tell it, his tendency toward penning dark songs with “a little dose of black comedy” started when one particular track on his collection of happy and upbeat solo material didn’t quite fit in.

“One song I wrote that just kind of went sideways wound up being a really sad song and a little humorous and kind of a little dark,” the Muskegon singer and guitarist recalled.

“Once I got it all recorded, I realized I really like this sound and I want to explore this more.” 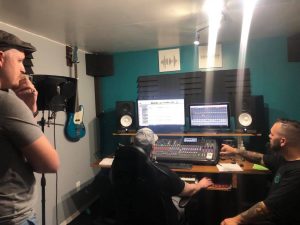 In the Studio: Working on “The Devil You Know.” (Courtesy Photo)

Soon after, Colt Snuffer & The Dead Horsemen was born – a strikingly singular fusillade of edgy gothic blues described as a mix of Nathaniel Rateliff and Amigo the Devil “with a sprinkle of Minor Threat and The Clash.”

After a few lineup changes, the band featuring Snuffer, 28, drummer Larry Passenier, 34, and bassist Brandon DeVille, 38 – exuding that “original sound and feeling” – is poised to release its first full-length studio album while generating a buzz in West Michigan as an emerging act to watch.

The trio releases “The Devil You Know” on Sept. 11 during a show at Muskegon’s Unruly Brewing, with Kalamazoo’s The Yesterdays also on the bill. (The band also plays at 8 p.m. Friday, Aug. 20, at Burl & Sprig in Muskegon.)

Passenier calls it “a really cool transition” from Snuffer’s efforts to play all the instruments himself as a solo artist to a band that’s really brought the singer-songwriter’s material to life.

“For me, it’s all about our friendship,” DeVille said. “As a group, we’ve become really good friends and we mesh really well. Going up on stage and connecting with fans is awesome. The experience for me has been phenomenal.”

It’s all been a pleasant surprise for Snuffer.

“I try not to dream that much. It certainly is not what I expected, not what I had envisioned,” he said. “But it’s way more than I had the tools to dream about.”

For this week’s episode of Local Spins on WYCE, the band debuted a new track from the forthcoming album (“Till the Ground”) as well as showcasing a song (“No Surprises”) from a 2018 EP, “Killing Crows.” View a video here for “Whiskey in a Wine Glass” released last year and scroll down to listen to the entire interview and radio show podcast.

Snuffer and DeVille recorded their parts for the new album at home, with drum tracks recorded at Exit Door Productions by Jason Ingersoll, a bandmate of Passenier’s in the hardcore/metal band xIron Sharpens Ironx. After mixing by Snuffer, the album was mastered by Ingersoll.

The collection fuses the bands varied influences: Tom Waits, The Dead South, Johnny Cash and Pink Floyd for Snuffer; American Football, The Beatles, Get Up Kids and City & Colour for DeVille; Glassjaw, Cattle Decapitation, Converge and Blood In/Blood Out for Passenier. 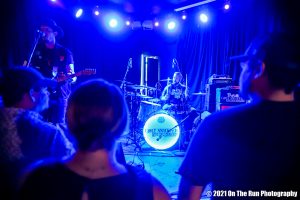 Collaborative Effort: “More Than I Had the Tools to Dream About.” (Photo/Eric Stoike)

It all comes out on stage during live shows, with the band’s chemistry on full display.

“It turns on something inside you that you can’t get by yourself,” Snuffer said.

That bodes well for the band’s future as it continues to make inroads within West Michigan’s music scene. Fall shows range from an Oct. 23 date at Kalamazoo’s Bell’s Brewery to Nov. 6 at Grand Rapids’ new Skelletones.

“We’re going to keep plugging away at this thing like we have been,” Passenier said. “In just a short period of time we’ve been able to connect with some amazing bands and artists, play and attend some awesome venues, write and release some jamming tunes, and grow closer together as friends.”

In addition to spotlighting Snuffer’s songs, this week’s edition of Local Spins on WYCE – which focuses on Michigan music at 11 a.m. Fridays at 88.1 FM and online at wyce.org – featured new music from Desmond Jones, Dani Darling, The Lasso, Jordan Hamilton & The Saxsquatch, marsfade and Edgar Hope & The Burdens (this week’s musician’s pick by Snuffer), as well as tracks by Out of Favor Boys, Ralston Bowles & The Accidentals, Shane Tripp and The Sweet Water Warblers. Listen to the podcast here.