Two Michigan festivals with a devoted fan base — one in late May and the other in late August — will take a hiatus for the second year in row. Get details at Local Spins.

What appeared to be doable — or at least, possible — several months ago has proven otherwise for many summer music festivals across Michigan.

Two intimate West Michigan music festivals with devoted audiences — the Buses by the Beach Bus Benefit over Memorial Day weekend in West Olive and the Willowsong Music Festival Aug. 27-29 in Sidney — made the difficult decision to forego their celebrations for the second year in a row. 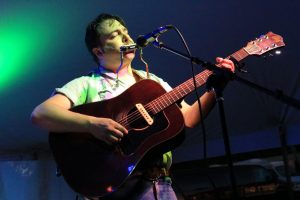 On the Docket: Nathan Kalish was set to return to Willowsong this year. (Photo/Anna Sink)

“With the recent surges in cases and the current restrictions on events, we just don’t feel that we could safely hold a festival in compliance with CDC and MDHHS guidelines,” Willowsong founder Eric Raby told Local Spins. “Here’s hoping that by next year we’ll be past all of this.

“It just doesn’t seem viable to try to police masking and distancing, eating and drinking in designated areas, and all of the things that would have to be done and enforced in order to keep people safe and in compliance with the rules and guidelines.”

Willowsong had previously announced a robust lineup of Michigan stars for its 2021 festival, including The Go Rounds, Charlie Millard Band, Patty PerShayla & The Mayhaps, Nathan Kalish & The Lastcallers, Nicholas James & The Bandwagon, The Bootstrap Boys and more.

“For three years with the help of an amazing staff, we shed blood, sweat and tears to produce Willowsong Music Festival,” proclaimed a statement on Willowsong’s website, which encouraged all Michiganders to get vaccinated. “We sincerely hope that we can all come together again in the future.”

Raby conceded that as a young festival, taking a two-year hiatus “is very daunting. I can only hope that the folks that were here the first three years won’t forget about us and we won’t be starting entirely from scratch after this.”

Meanwhile, the Bus Benefit — one of Michigan’s first music festivals out of the gate every year — canceled its 2021 event with “a heavy heart.”

“After many discussions with local officials, Camp Blodgett and other early season Michigan festival organizers, we feel that this is the best thing for our tribe, our health and our community,” the official announcement asserted.

Brien Dews of Buses by the Beach — which hosts the festival to raise money for the Phoenix Society for Burn Survivors — said organizers initially anticipated they’d be able to proceed with the 2021 festival at Camp Blodgett south of Grand Haven.

“We have been holding out hope that we would see COVID cases on the decline,” he said. “Unfortunately, the recent rise in cases was concerning for our board. I definitely think we would have a different approach to putting this event on if it had been scheduled for later in the summer.”

For 2022, Buses by the Beach hopes to bring back the artists it had booked for this year’s benefit and the group still plans to host its annual “Bus Boo” event in October. 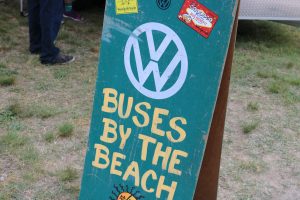 Difficult Decision: Buses by the Beach’s benefit hopes to return in 2022. (Photo/Anna Sink)

A third Michigan festival — the Frederic Music Festival planned for June 25 in Frederic, just north of Grayling — also pulled the plug on its event this week.

While organizers in the northern Michigan community cited health department restrictions on crowd size as a consideration, they said “the health and welfare of our community was the biggest factor.”

They also indicated there’s a possibility of staging the annual celebration later this summer, depending on the status of the pandemic.

Although several smaller festivals — including the inaugural Smiling Acres Music Festival recently announced for Trufant — currently plan to proceed, music fans are still awaiting final word on larger celebrations such as Rothbury’s Electric Forest, which has indicated that if it does take place, it will be held in August rather than late June.