The former Silver Bullet keyboard player is now an award-winning Wyoming recording and mastering engineer who toured and recorded with Seger during the ‘golden years.’ 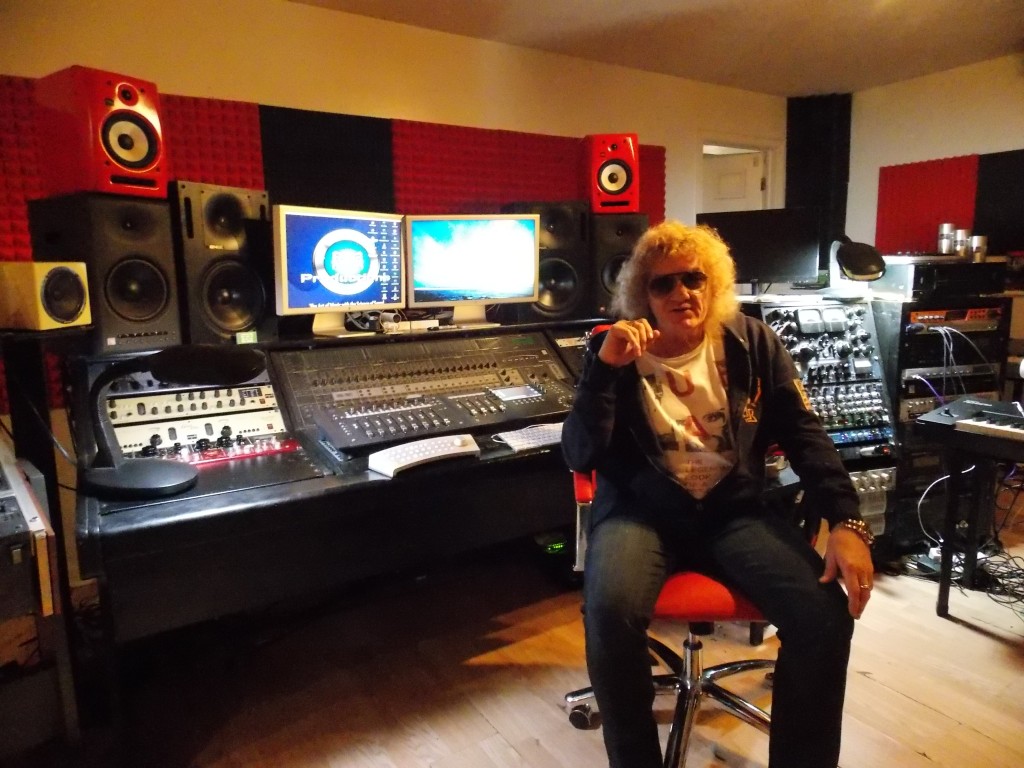 When Bob Seger formed his Silver Bullet Band in the mid-1970s after struggling to find the right musicians to drive his rootsy, Michigan-muscled rock, he ended up leaning on a talented bunch of experienced session players and performers who developed a rare chemistry. 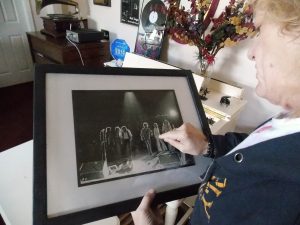 Silver Bullet Days: Robins checking out a photograph of himself on stage with the Silver Bullet Band. (Photo/Local Spins)

Keyboard player Robyn Robins was among them, a graduate of Grosse Pointe South High School who started working as a Detroit recording studio and Motown session musician at age 17.

“We all came from different backgrounds. Each of us was handpicked for the Silver Bullet Band . … When we had the band, the magic happened,” says Robins, 62, who moved to the Grand Rapids area seven years ago after spending time in Ireland as a recording/mastering engineer. He now runs his award-winning Robyn Robins Productions studio in Wyoming, with a sister operation in Nashville. 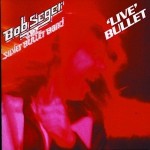 Robins was part of the historic “Live Bullet” concerts and album.

“A little while ago, I listened to a live recording of the Silver Bullet Band from the Whiskey a Go Go (in West Hollywood). We were really good, and that was before (1976’s mega-selling) ‘Live Bullet.’ When I listened to that, I was shocked. You forget things.

“But in those days, if you didn’t have the talent, you wouldn’t have been there in the first place. It was the combination of what everybody brought to the table – their input into the music. And ‘Live Bullet’ is such a representation of that. That thing is still selling.”

THE ‘BEST TIME,’ FROM TRAVELING IN SEGER’S WINNEBAGO TO TOURING BY JET

“It was the best time. It was great,” says Robins, sitting in his basement studio surrounded by keyboards of every shape, style and model.

He jokes that the Silver Bullet Band spent two years in the back of Seger’s old Winnebago touring the country before commercial success allowed them to travel – and party – by jet, and eventually play for mammoth crowds in some of the country’s biggest venues. 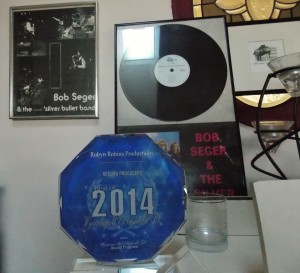 Kudos: Some of Robins’ awards and memorabilia. (Photo/Local Spins)

Through it all, he says, Seger has remained the same approachable, blue-collar fellow he’s always been.

“He’s great, he’s down-to-earth and pretty tolerant and patient,” Robins says. “We had our ups and downs, but he was great. He’s still great. He’s more mellow now. We were all crazy back then. We were all pretty wild.”

Although he hasn’t been part of the Silver Bullet Band for decades, Robins maintains a close relationship with many band members, including Reed and backing singer Shaun Murphy, both of whom have laid down tracks for different projects in Robins’ Wyoming studio.

So on Tuesday, when the latest version of the Silver Bullet Band rolls into Grand Rapids’ Van Andel Arena for a sold-out 7:30 p.m. show – the ninth stop on Seger’s North American tour behind his latest album, “Ride Out” – Robins will pop over for a visit with his one-time bandmates during sound check and likely chat about old times.

Robins certainly hasn’t rested on his Silver Bullet laurels: The keyboard player-turned-recording engineer has carved out an impressive career the past few decades, from working with The Bee Gees in Miami to mastering or re-mastering records for U2, Sinead O’Connor, Riverdance, Damien Rice, Dervish, The Saw Doctors and Van Morrison in Ireland, where he relocated in 1992.

“I ended up being an authority on Irish music,” Robins quips.

He also has been heavily involved in several recordings by acoustic guitar phenoms Rodrigo y Gabriela, who were busking on the streets of Dublin when they first were discovered. The duo’s self-titled 2006 album, mastered by Robins, debuted at No. 1 on the Irish Albums Chart and later was certified platinum. They even visited with Robins in Grand Rapids when they appeared here last summer during a stop at Frederik Meijer Gardens & Sculpture Park. 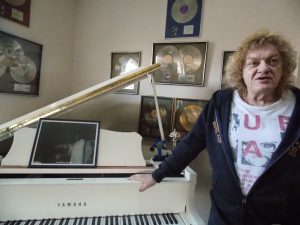 Robins and his Irish wife moved to West Michigan seven years ago because he was anxious to return to the United States – in part to find good schools for his 12- and 16-year-olds sons – but wasn’t interested in relocating to Detroit. His brother, who lives in Hastings, suggested the Grand Rapids area. Robins loves the location and can easily make the two-hour flight to Nashville when necessary to work with a variety of clients.

“I’m still associated with them (Silver Bullet Band members) on a business level,” says Robins. “There’s always been talk of a reunion with the real original band, but I’m into my own thing.”

Still, he remains proud of his stint with the Silver Bullet Band – framed black-and-white photos and gold albums from that heady era hang prominently in his home. And he continues to speak fondly of those days on the road with the future Rock and Roll Hall of Famer, Seger, a “genuine” guy he says has always related to the common man.

“He can carry on a conversation with anybody,” he says, adding that Seger’s stage shows have always reflected his personality: down-to-earth, meat-and-potatoes rock shows without an over-abundance of glitz. “With Seger, it’s nuts and bolts. It’s blue-collar music.”