Shawn Colvin, Leftover Salmon, Laith Al-Saadi, Donna the Buffalo, The Accidentals and others bolster the lineup for the first Blissfest since 2019 north of Harbor Springs. The preview at Local Spins. ‘Much More Than Music’: But that’s the main focus at Blissfest. (Photo/Sean Miller)

On Friday (July 8), it returns with dozens of local, regional and national genre-spanning acts.

Thousands of festival-goers, volunteers and coordinators are ready for an overdue taste of Bliss: The last in-person festival was held in 2019 due to the COVID pandemic.

Taking place Friday-Sunday near Cross Village — north of Harbor Springs — the 40th edition of the much-beloved festival dedicated to preserving the tradition of American and world roots music shapes up as a true reunion.

“After waiting these two years, we are absolutely thrilled to present the 40th Blissfest,” said board president Angie Myers.

“We’ve missed our Bliss family and cannot wait to spend the weekend enjoying our favorite live music, food and festivities with everyone.” 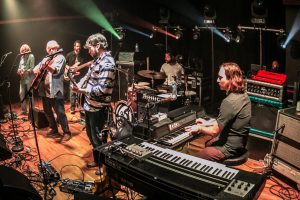 This year’s headliners include multi Grammy award-winning songwriter Shawn Colvin, who may be best know for her song “Sunny Came Home.” Colorado-based jam band Leftover Salmon rounds out the headliners and will be performing on the festival’s main stage Saturday night.

The rest of this year’s lineup is a hard hitting one filled with acts including Laith Al-Saadi, Miko Marks, Donna the Buffalo, Parsonsfield and Erin Coburn.

This year’s festival also includes a number of returning acts including Igor & The Red Elvises, Scott Cook and Michigan’s own Seth Bernard, Galactic Sherpas, Pistil Whips, May Erlewine, The Accidentals, Patty PerShayla and the Mishaps, The Lonely Lovers, Jordan Hamilton and Nicholas James & the Bandwagon.

Many artists are excited to be returning, however, Nicholas James Thomasma — a festival patron for over a decade — is excited to not only be returning but to be performing at the festival this year for the first time.

Thomasma and his band have a number of sets including one a the festival’s third stage, the Michigan stage and the song tree. He’ll also be leading an open jam Saturday morning in plucker’s paradise.

“I’ll be busy but I’m excited to explore the different places to play. I’m also really looking forward to settling in for the weekend. Festivals are exhausting but so rejuvenating at the same time getting to spend time with my bandmates and friends,” he said.

Aside from the abundance of music throughout the festival grounds, patrons can take part in multiple workshops, open mics, drum circles, different crafts, the kids’ area and more. The festival will also have various food trucks and vendors and a walk-through style art market with various vendors near the main stage.

“There’s obviously much more than music which makes us stand out with all of our other wonderful offerings that people of all ages can explore and take part in,” said festival talent buyer Caroline Barlow.

Barlow echoed the festival’s board president in saying she too is relieved to be celebrating the festival’s return and to see much of what was planned for 2020 finally come to fruition.

“We did rebook a lot of what was planned and booked for 2020 which was largely curated by Jim Gillespie and myself,” she said. 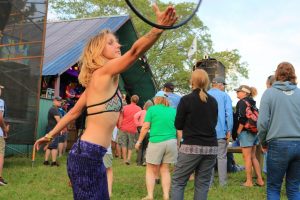 Dedicated Fans: Bliss veterans will be back in full force. (Photo/Anna Sink)

Gillespie, the now retired founder, passed the torch on to the festival’s only second president in its four-decade-long history with Cindy McSurely taking the helm in January of 2020 — just three months before the board voted to cancel what would’ve been her first festival.

However, she is just as excited to be hosting her first festival as director and to see everyone returning to the festival grounds after so long. She, like many, grew up coming to Blissfest and is eager to once again “recharge her batteries.”

“The festival is important to us and many others and we are happy to be having it again,” said McSurely.

“I think Blissfest has made a great impact on both the region and those who live here and has been a catalyst for good and creativity for decades. We can’t wait to welcome our festival-goers next week for another amazing year.”

More information about the upcoming festival including a complete lineup, festival rules, camping information and more can also be found online here.