With a new EP catching fire, the Grand Rapids band talks about its music, performs on the air (and in a bank), and prepares for Local Spins’ 4th anniversary show on Saturday. 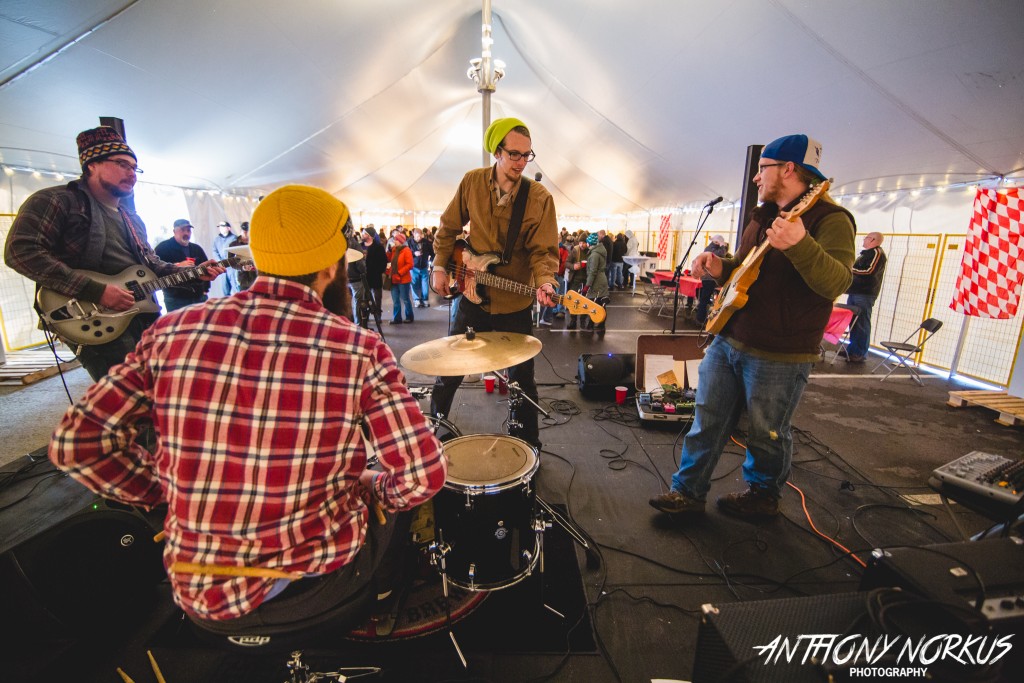 THE BAND: Big Dudee Roo
THE MUSIC: Grungey, psychedelic folk-rock
WHERE YOU CAN SEE THE BAND: 9 p.m. Saturday at Long Road Distillers in Grand Rapids with Brother Adams; June 10 at Buttermilk Jamboree in Delton; July 21 at Celadon Outdoor Amphitheater in Grand Rapids

Big Dudee Roo is the sort of band that’s so passionate about the music it plays, it can’t even leave a downtown building after a radio interview without offering to perform another one of its songs for complete strangers. 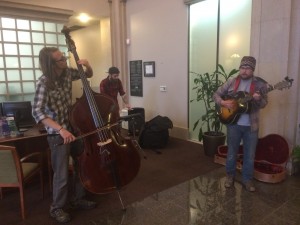 Case in point: Three members of the Grand Rapids psychedelic folk-rock band set up gear Wednesday morning in the corner of First Community Bank on Monroe Center NW to regale employees with an impromptu rendition of their song, “Waking Up.”

The bank staff happily took photos and videos as upright bassist Max Lockwood, guitarist Nate Wagner and drummer Daine Hammerle took advantage of the natural reverb in the spacious room to unfurl an unusual version of the track from the band’s most recent EP, “Dudee Free.”

“It looked pretty lonely, quiet and somber in that high-ceilinged bank,” Lockwood said later. “Thought we would spice things up a bit and brighten someone’s day a little hopefully.” (Check out a video below.)

For Lockwood and Wagner, who started playing together as middle school students in Wayland about a decade ago, that attitude has propelled their love of music and the development of Big Dudee Roo, which continues to grow its audience with each new release.

“These guys are my boys,” said Lockwood, an Earthwork Music collective musician who’s involved in numerous musical endeavors, collaborating with the likes of renowned artists Seth Bernard and May Erlewine, his own Michigan Basement project, and others.

GROWING, CHANGING AND ‘GETTING BETTER AND BETTER’

“We’ve been hanging out together ever since we grew up down in Wayland. We’ve got sort of a deep connection and a deep history, and the band keeps growing. This is our fourth record. It just keeps getting better and better and keeps growing and changing. It’s really exciting and super close to my heart.”

Wagner noted the seeds of the band grew from an early punk rock venture, The Wealthy Homeless. It later morphed into a folkier Big Dudee Roo sound fueled by Neil Young and Wilco, and eventually, the more psychedelic-oriented vibe the band churns out these days.

“We decided to take it back to our roots of listening to a lot of Pearl Jam and heavier rock,” added Lockwood, “sort of the grunge, psychedelic sound grew out of that in the last couple years.”

The band can still get folky when it wants to, however, as demonstrated by its trio performance at the aforementioned bank and during this week’s edition of Local Spins Live on News Talk 1340 AM (WJRW), with Lockwood breaking out his upright bass and Wagner playing an acoustic guitar on the song, “Nothing Good Today.” Check out the podcast and full interview here, with a video of the band’s in-studio performance below. 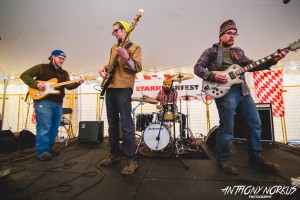 On Saturday, lead guitarist and longtime band member Justin Dore will help crank up the psych-rock volume by joining the group for Local Spins’ 4th Anniversary Party at Long Road Distillers in Grand Rapids, with Holland’s Brother Adams opening the 9 p.m. show. Doors open at 8 p.m. and tickets are available online here. Local Spins also will be on hand for special giveaways that night.

Wagner said the psychedelic rock movement involves “experimenting with different sounds,” with bands such as Big Dudee Roo unleashing their own take on the genre. “It’s a good creative outlet for people to do whatever the heck they want,” he said.

Lockwood’s classical training on the upright bass has added to the improvisational jamming and the “different element” of Big Dudee Roo’s rock music, which will be on display throughout the summer at a variety of festivals, including Buttermilk Jamboree, Hoxeyville and Earthwork Harvest Gathering.

The band also has been collaborating with hip hop’s Rick Chyme, writing new music and just “seeing where it goes,” Lockwood said.