River City Narrative and Anonymous Phone Call are also part of this week’s roundup of new Michigan releases. Check out the reviews and listen to music from each featured artist. 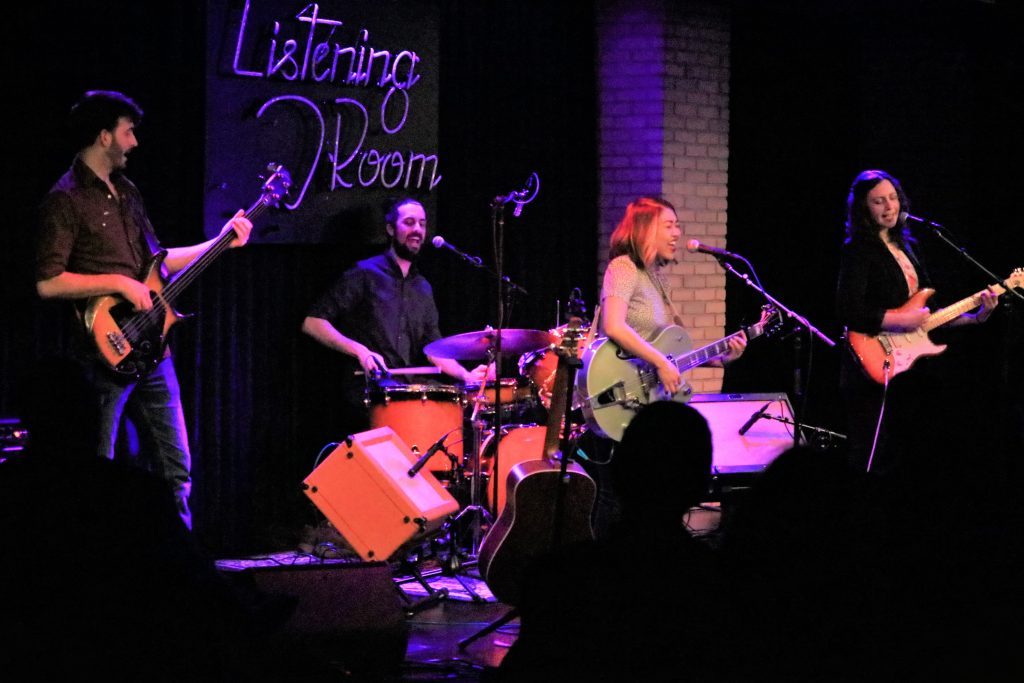 Another October roundup of new releases by West Michigan artists features a new live album from a much-beloved Grand Rapids folk-rock band, full-length debuts by a few emerging groups and an ultra-collaborative collection by The Soods.

Check out this week’s spotlighted albums and selected tracks, with more to come. 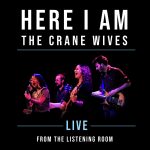 The Crane Wives
“Here I Am”

What Stands Out: With 20 tracks recorded live during an all-engrossing, sold-out show at the intimate Listening Room in downtown Grand Rapids in February, “Here I Am” comes as close as anything to representing the dynamic and infectious flavor of The Crane Wives in concert without actually being there. And considering the COVID-19 pandemic has essentially shut down live music opportunities for most bands, it’s a welcome and refreshing splash of Crane Wives magic – from longtime fan faves such as “Allies or Enemies,” “Tongues & Teeth” and “High Horse” to five brand new, previously unreleased gems, including the fiery “Nobody,” starring the lead vocals of Emilee Petersmark and fetching harmonies of Kate Pillsbury and Dan Rickabus.
Digging Deeper: The collection not only does a fine job of reflecting the Grand Rapids folk-rock band’s 10-year history but manages to sound pretty groovy in a concert-vibe sort of way (with live mixing by the Listening Room’s Nicholas Connor Jones). Longtime fans will appreciate and revisit that feeling; new fans will find an all-in-one-place retrospective of what The Crane Wives bring to the table.
Perfect For: Devotee sing-alongs, fall color tour drives through Michigan. – John Sinkevics
Website: http://www.thecranewives.com/
Listen: “Curses” 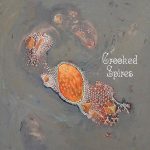 What Stands Out: With great tonal and rhythmic character and a dynamic range, this self-titled release grabs hold of listeners from the very first play. Opening with the lilting indie-rock vibe of “Scribal,” the Grand Rapids-based trio builds to a grungier guitar-driven rock sound in succeeding tracks before returning to ethereal atmospheric sounds. The album shifts back and forth between those two distinct modes of driving garage-rock revival and quasi-mellow indie-rock — sitting comfortably somewhere between Interpol and The Shins. Add maybe just a pinch of Dave Matthews Band for good measure and you’ll have something close to this polished and thoughtful release from Crooked Spires.
Digging Deeper: Crooked Spires is labeled a “psych-rock with soul” trio project, mainly featuring Christian Nikkel on guitar and vocals, Thom Vander Velden on drums, and Nick Schultz on bass. But the album encompasses a wider set of players, with notable local guest artists such as Jordan Hamilton, Josh Holcomb and Dutcher Snedeker. (Micah Stillwell also tracked three songs on bass.) By the way, Crooked Spires plays a socially distanced house concert at 7 p.m. Friday with Earth Radio, Sun of Naue and Jake Kalmink. Details here.)
Perfect For: Fans of indie-rock, the local GR scene, or just rock music in general. – Jamie Brackman
Website: https://www.facebook.com/crookedspiresmusic
Listen: “Buzzsaw Blitz” 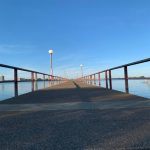 The Soods
“Ornaments of Affection”

What Stands Out: The Soods occupy some rare air in West Michigan’s music scene. Spearheaded by guitarist and multi-instrumentalist Jason Roy, the Grand Rapids collective weaves a who’s who cadre of regional artists into its various tracks and projects while maintaining an impressive consistency in its airy, often-hypnotic approach to indie-rock. So it’s only apropos that Roy would kick off The Soods’ latest full-length album with the psychedelically tinged, British-sounding gem, “Oh, Mersey Days,” featuring lyricist Shane Tripp on lead vocals. It sets the stage for what’s to come – a tantalizing opener just begging listeners to delve beyond. Subsequent tracks such as “Wounded Cardinals,” “Morning Harold!” and “Cosmic Radio Burst” don’t disappoint.
Digging Deeper: Co-produced by Roy, Amber Lit Audio owner Matt Ten Clay and former Elroy Meltzer bandmate Steven Meltzer, dreamy textures abound on “Ornaments of Affection,” not to mention guest appearances by familiar names in regional music, including Patrick Wieland, Ryne Clark, Paul Geoghan, Timothy Rodriguez and others. Buried near the end of the album, the uptempo “Stealing Glances” might be the standout track and certainly could have benefited from more prominent placement. Don’t overlook it.
Perfect For: Transporting your thoughts to a different, more pleasurable locale. – John Sinkevics
Website: https://www.facebook.com/thesoods/
Listen: “Stealing Glances” 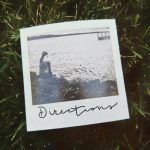 What Stands Out: Although it’s the band’s first full-length album, the maturity and strength of “Directions” makes it apparent that River City Narrative has been making music together for quite some time. (The group released its debut EP in 2017.) The band — Chad Hayes, Peter VanSprange and Jesse Andrews — has spent years honing its eclectic, indie folk-pop sound, and with the release of “Directions,” the band carves out its own unique little corner in the Grand Rapids music scene. They sound exactly like what they are: a group of good friends making music together, who’ve been at it long enough to be comfortable taking on creative challenges such as this.
Digging Deeper: “Directions” is full of catchy stories that are, in the band’s own words, about “choice and decision making and the troubles we all face through life.” The album is well-balanced, with sorrowful, tender moments (“For Someone Else”) coupled with inspiring and uplifting ones (“Break Of Dawn”). The alt-country meets indie-folk sound proves to be the perfect delivery system for all of it. As the band puts it on the title track: “So many directions in this life/We can aim/Better than turning around and heading straight back to the pain.” Let’s just say that musically, this well-grounded group is heading in the right direction.
Perfect For: Fans of folk, alt-country, indie-rock/pop and good storytelling. – Devin Dely
Website: https://www.rivercitynarrative.com/
Listen: “Directions” 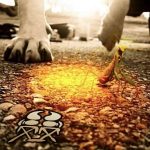 What Stands Out: Members of this alt-rocking Traverse City band like to describe themselves as “the heaviest band at the folk fest and the funkiest band at the punk show.” With their self-titled sophomore album, it’s easy to see why – especially on tracks such as “Anatomy of a Groove” and “The Shell,” which marry funky, jam-band-like electronics with grunge-fueled rock. But the band featuring brothers Darin Bluhm on drums and Caul Bluhm on bass, with guitarists Earl Peitz and Aaron Johnson, also breaks new ground with this 2020 release, deftly melding Southern rock twang into tracks such as “Moving On” and “Take Me Home,” and stirring in reggae flavors on “Burn the Evidence.”
Digging Deeper: At their core, The Brothers Crunch are a muscular rock band, leaning on the heavier side of things (“Tea Party” and “Grind” are good example) with genre-exploring tendencies. While a few of the 12 tracks on this latest release could have been tightened up lengthwise, there’s also something genuine and refreshing about a band that stretches out, lets everything go and doesn’t hold back. Party on.
Perfect For: Reminiscing about those days when music festivals were a thing — head bobs and fist pumps included. – John Sinkevics
Website: https://www.facebook.com/thebrotherscrunch/
Listen: “Burn the Evidence” 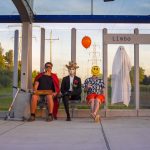 What Stands Out: Anonymous Phone Call strikes a delicate balance between hard rock bombast and soft, earnest heartache on its new album “Limbo,” and does so with a clever smirk. The Grand Rapids and Lansing-based rock band’s sophomore album builds on the pop-punk aesthetic established on its debut “The Wait” with more focus and maturity. That maturity stands cheekily in contrast to the childlike wonder which the album’s cover evokes, but it all makes sense in the context of the band’s occasionally self-effacing, but never self-serious, lyrics.
Digging Deeper: There’s a broad palette of rock stylings on display. “One More Mistake” rings out with anthemic movements and lyrics reminiscent of pop-punkers Say Anything. “Sidekick” compares life to a movie, complete with an intro drum roll quoting the 20th Century Studios fanfare. The heavily distorted guitarmonies on “Intermission” amusingly belie its regal composition, a lovely contradiction. “3AM and I” is the album’s standout track, lyrically and musically. It’s a down-tempo ballad and ripping rock tune wrapped into one. Led by a riffy acoustic guitar and lead singer Chaseton Cain’s sobering voice, the song includes huge gang vocals, blistering drum fills by Ben DeWitt and the recurrent lyric, “3 a.m. and I will never be friends.”
Perfect For: A nostalgic drive through your hometown. – Devin Anderson
Website: anonymousphonecall.com
Listen: “3AM and I”