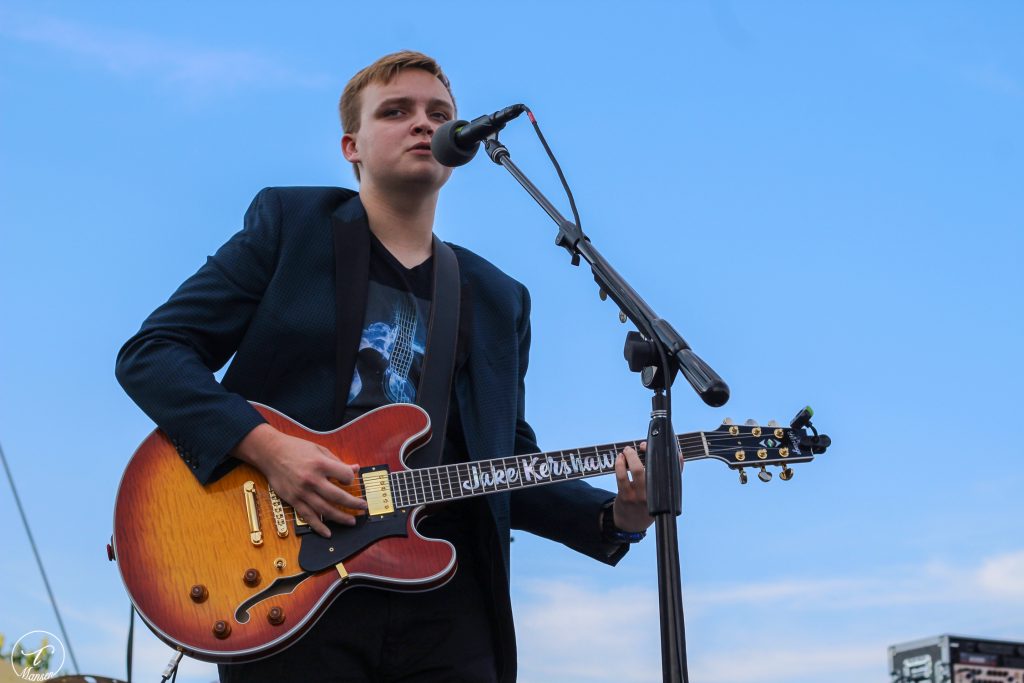 SCROLL DOWN FOR REVIEWS, A LIST OF NEW RELEASES + THE LOCAL SPINS ON WYCE PODCAST FEATURING THE HOT TOP 5

Call it “A Midsummer Night’s Dream” — a dream lineup, that is, of local and regional music. 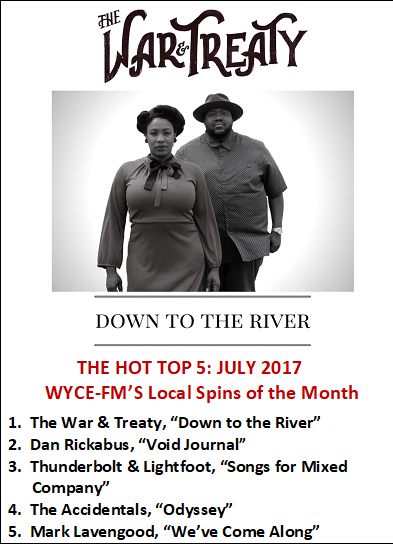 July not only saw the arrival of some much-heralded new albums at Local Spins and in the studios of community radio station WYCE (88.1 FM), but also boasted the attention-getting debut of several Michigan artists who immediately soared to the top of the pack.

One need look no further than the recording that shot straight to No. 1 in topping all other albums and EPs by local and regional artists in total spins played on the air at the radio station in July: The War & Treaty, a gospel- and soul-fired roots duo which also made an in-studio appearance in mid-July for Local Spins on WYCE.

Check out a video and podcast from that memorable session in this Local Spins feature, and read a review of their new album online here, where you can also check out a review of the No. 4 album on the Hot Top 5 chart – The Accidentals’ “Odyssey” (which officially gets released Aug. 18, the same day the Traverse City band will visit Local Spins on WYCE).

Rising to No. 2 on the Hot Top 5 for July was the fetching new solo album from Crane Wives drummer Dan Rickabus, followed by Kalamazoo indie-folk duo Thunderbolt & Lightfoot’s latest release. Read reviews of both of those albums below, along with recaps of new releases by Jake Kershaw, On the Line, Barbarossa Brothers and Paddlebots. And listen to samples of the new music, too. 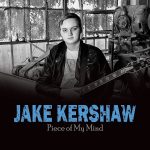 Jake Kershaw
“Piece of My Mind”

Teenager Jake Kershaw wastes no time announcing his presence – and flaunting his talent – as a blues force on his debut album. The opening track, “Going Home,” encompasses just about everything that makes this Marshall High School student such a fast-rising, audience-pleasing sensation: fiery blues-rock guitar riffs and solos, smart hooks and a fresh, sincere exuberance. That Kershaw rolls it all out with the easy confidence of a veteran bluesman just make it all the more impressive. The seven-track album recorded at Grand Haven’s Third Coast Recording Co. and co-produced by Bill Chrysler and Joe Hettinga isn’t all flash and flame: “I’ve Been Waiting” boasts a soulful, slow groove that showcases intense vocal pining and searing-to-the-soul guitar work. Five of the seven tracks were written by Kershaw, and like the young blues phenoms that have come before him (Jonny Lang, Joe Bonamassa), one can only imagine that life experiences will only further enhance this 16-year-old virtuoso’s original material. Until then, plenty of Michigan blues fans will happily savor this particular piece of his mind. – John Sinkevics
Website: jakekershaw.com
Upcoming Shows: 4 p.m. and 6 p.m. Saturday at Saline’s Summerfest in Saline; Aug. 18 at St. Louis Blues Festival in St. Louis; Aug. 19 at Walk the Beat in Grand Haven; Sept. 9 at Perrin Brewing’s 5th Anniversary Party in Comstock Park
VIDEO: “Going Home” 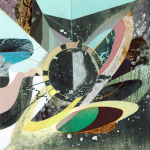 For many musicians, creative impulses strike as often and sudden as allergies. Ideas appear in the mind out of nowhere and the cognitive chamber becomes a canvas, or a Grand Staff, or a sheet of notebook paper. But the true magic behind creativity and art lies in the materialization of those ideas: shaping and taming those ideas into tangible specimens. For Dan Rickabus, it seems it wasn’t so much about taming those creative impulses, as it was letting them run wild and free. On his debut solo album, Rickabus unravels a collection of cosmic mementos in the form of 12 songs. The opening track, “Bluegreen,” sets an atmospheric tone with its ethereal guitar swells and rumbling drums. Rickabus sings simply, spinning a tale of origination in only a few words. One striking aspect of the album is its employment of ukulele as more than just a prop reserved for island strums and “Somewhere over the Rainbow” covers. This is evident during “Chin Up New Day,” in which ukulele leads the way through a psychedelic journey of swirling instrumentation. “Wendigo” proves to be another standout with its 5/4 time signature giving the track a determined, driving feel. Once the drums drop, it becomes a rhythmic smorgasbord. Concluding the album, both “Last Look” and “Astronomy” hit pause on the drums in exchange for amorphic tapestries of sound. Void/Journal is a sincere release from one of West Michigan’s most active musicians. Although Rickabus is a drummer at heart, his lyrical and vocal performance fit quite well within the context of the album, which boasts compositional confidence and a strong, rhythmic backbone. Carefully crafted, with acute attention to detail, this debut LP is a hopeful one, both in thematic tone and future trajectory. – Ricky Olmos
Website: https://danrickabus.bandcamp.com/releases
Upcoming Shows: 8 p.m. Thursday (Aug. 10) at Long Road Distillers in Grand Rapids
Listen: “Wendigo” 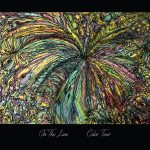 On the Line
“Color Tour”

Talk about an auspicious debut. On the Line’s “Color Tour” takes its cues from labyrinthian prog-rock icons such as The Mars Volta and Porcupine Tree, but brings its own polished combustiveness to the musical table via lengthy but muscular tracks that deftly marry memorable hooks with cutting-edge alt-rock charm. With roots in Rockford, the young Grand Rapids-area band featuring Frank Tuka IV on guitar, Ryan Jamgotch on lead vocals/guitar, Calvin Garvey on bass and Zach Dubay on drums recorded the project at Rockford’s Planet Sunday Studios with co-production by Joel Ferguson. That team created a lush musical landscape that balances progressive, atmospheric inventiveness with a pop-hued sensibility that propels the album’s lead single, “Cityscape,” and tracks like “Red Skies” and “Road of Reoccurrence.” That lustrous blueprint makes this “Color Tour” well worth the trip. – John Sinkevics
Website: onthelineband.com
Upcoming Shows: 9 p.m. Friday at Shots on the River in Belmont; Aug. 26 at the Rose City Music Festival in Rose City
Listen: “Cityscape” 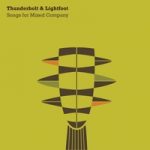 A duo that evolved from a long-established musical relationship birthed in the Corn Fed Girls, Phil Barry and Sarah Fuerst, aka Thunderbolt & Lightfoot, just released their full-length debut and second recording overall. Putting a mellower foot forward, “Songs for Mixed Company” is highlighted by a soft harmonious approach that touches on relationships, politics, love and loss. Recorded and mixed by Ian Gorman at La Luna Recording and Sound in the duo’s hometown of Kalamazoo, the album at times reminds of a diet version of The White Stripes and at others early ’70s Simon and Garfunkel. Featuring special guest appearances by a cast of notable Michigan musicians including Mike Lynch on accordion and organ, Jeff Moehle and Geoffrey Hasley on drums and percussion and Fuerst’s husband (as well Barry’s bandmate in Knee Deep Shag) Michael Fuerst on strings, “Songs” is perfect for a coffee shop setting or a nice night at home by the fire. From the catchy “Miss Me” to the accordion-driven “Goodbye is not the End” to the lone cover on the album, Bruce Springsteen’s “I’m on Fire,” the album provides enough variety to keep a listener intrigued and tapping their fingers or feet. Songs such as “Dearly Beloved” — a track that puts a modern and familiar twist on wedding vows — present the lighter side of the album, while other tunes such as “Year of the Monkey” delve into the political realm. And while that specific song was written pre-2016 election, it takes its fair share of metaphorical and literal jabs at No. 45 in a spirit a la Woody Guthrie. The album was funded by a grant from the Arts Council of Greater Kalamazoo. – Ryan Boldrey
Website: thunderboltandlightfootband.com
Upcoming Shows: Sept. 15-17 at Earthwork Harvest Gathering in Lake City
Listen/Watch: “Let’s Be Friends” 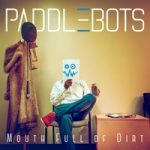 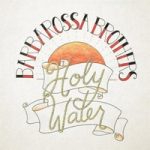 Hailing from Saginaw, Barbarossa Brothers have staked their claim in the Michigan music scene as well-versed troubadours, steeped in the traditions of backwoods folk. Look no further than the first track of the album, “Shoot You Down,” and one can infer that this group means business. An exposition of guitar strums and warbling vocals are suddenly overtaken by brash, accented hits before shifting into a runaway folk-rock promenade. The title track, “Holy Water” sounds like a Southern tent revival took a shot of whiskey. The rollicking track provides a reflective and relatable narrative. Church organ, shimmering tambourine and a choir all dance in musical circles around each other. Drew Pentkowski and Loren Kranz’s vocals are soulful and smooth as ever. “I Can Be Kind” shifts genres to the funky, groove-steady side of things. Vocally, the track has a carefree refrain, backed by a tight instrumental ensemble that includes drums, guitar, organ and muted trumpet. Rounding out the track is a jumpy guitar solo of epic proportions. Polyrhythms abound in “Simon in the Bay,” the closing instrumental track, a near-five-minute immersion into the free expression of folk-rock. The symmetrical structure and longer timespan gives instruments a chance to explore within the confines of the song. An instrumentally, lyrically and thematically sound album, “Holy Water” is the definition of a group of good friends performing inspired, well-crafted songs that flow seamlessly together. With such energy, the group blurs the lines of recording and live performance. – Ricky Olmos
Website: https://barbarossabrothers.bandcamp.com/
Upcoming Shows: Aug. 11 at Grand Marias Music Festival, Aug. 11 at Ore Dock Brewing in Marquette, Aug 18 at Lansing Brewing Company
Listen: “Shoot You Down”

This week’s edition of Local Spins on WYCE featured an in-studio performance by Sparta Celtic Festival performer Toby Bresnahan, plus new tracks from Tom Hymn, Laura Rain & The Caesars, Blarney Castle and Age of Aletheia, plus the Hot Top 5 countdown of top July tracks with The War & Treaty, Dan Rickabus, Thunderbolt & Lightfoot, The Accidentals and Mark Lavengood. Listen to the full podcast here.