With a back story that involves Saddam Hussein’s piano and gospel roots, this soulful Albion duo and backing band are creating a buzz. Plus, the debut of new music by Cosmic Knot, Gifts or Creatures, The Out of Favor Boys and more. (Story, podcast, video) 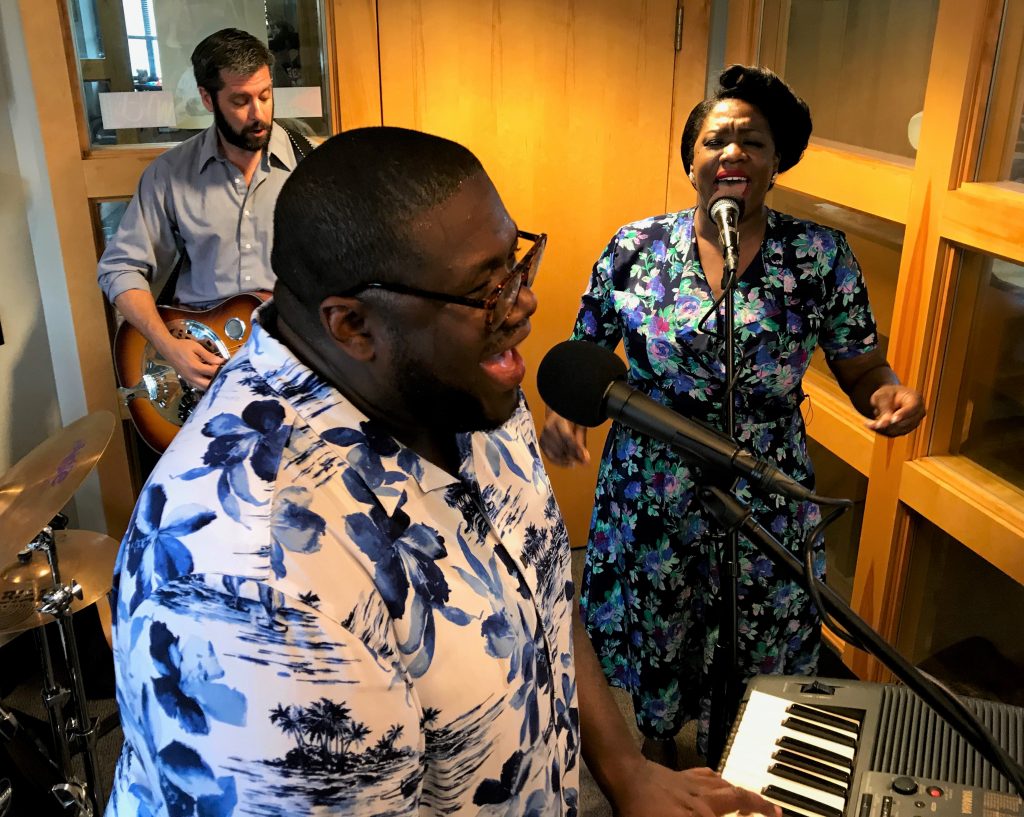 ‘Not Holding Back’: The War & Treaty performing during Local Spins on WYCE. (Photo/Local Spins)

THE BAND: The War & Treaty
THE MUSIC: Blues-, gospel- and soul-fired indie-folk
WHERE YOU CAN SEE THEM: 8 p.m. Saturday at Orchestra Hall in Detroit for the Concert of Colors (part of the Don Was Detroit All-Star Revue: Music of Rebellion); July 21 at the Ann Arbor Summer Art Fair in Ann Arbor; July 22 at The Robin Theatre in Lansing; Aug. 5 at Otus Supply in Ferndale; Aug. 12 at Arcadia Ales in Kalamazoo as part of the Riversedge music series.

SCROLL DOWN FOR VIDEO, RADIO PODCAST

Every buzz band has a back story.

But Michigan’s The War & Treaty may top them all with a soldier who honed his chops on Saddam Hussein’s piano in war-torn Iraq, won a “Military Idol” competition and then married a dynamic singer inspired by such diverse voices as Mahalia Jackson, Whitney Houston, Dolly Parton and Aretha Franklin. 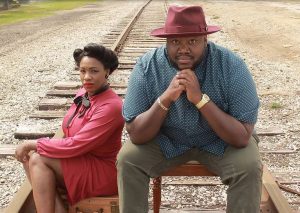 Releasing a Debut EP: Tanya and Michael Trotter of The War & Treaty.

Together, Michael Trotter Jr. and Tanya Blount unfurl the sort of soulful, bluesy and rootsy magic reserved for a select few on the music scene – gospel-fired songs from the heart that turn heads, bring tears and lift spirits wherever they play.

And plenty more across the country will get a chance to experience that this summer as The War and Treaty tour behind their debut album, “Down to the River,” an eight-song EP which officially gets released July 21.

“We were so in love, it didn’t dawn on us what was going on,” Trotter said of the couple’s first performances together, drawing inspiration from the Americana duo The Civil Wars.

“We actually had to learn how to sing together. We both had these different unique voices. … We found that the more we acted out the songs and inflected the emotions and not hold back (with) the growling and foot-stomping and some of those gospel inflections, we just found out that it’s not only a cool sound, but it’s taking people back to a place where people freed them.

“I thought that was more impressive than the skills of our harmonies. In our shows to see people cry and see people walk away saying, ‘Your music touched me,’ was like, wow, we’re in the slipstream now.”

The band – the Trotters, guitarist Ben Wade, bassist Ronnie “Coach” Parker, mandolinist Steve Opp and drummer Jeffrey Rodgers – showed off that inspiring approach by filling up Studio X at WYCE-FM for this week’s edition of Local Spins on WYCE, performing the songs “Hi Ho” and “Hit Dawg Will Holla.” Watch a video of their performance of “Hi Ho” here, and listen to the podcast of the full radio show below.

They found their stride in, of all places, the mid-Michigan hamlet of Albion, population 8,267, where the couple moved a year ago, formed a band and recorded their debut album.

For Blount – who was raised amid the gospel environment of a Baptist church, landed her first record deal as an R&B singer at age 18 and studied classical music at Morgan State University – falling in love with Trotter was also a turning point for her own music.

“I realized he was just like this incredible writer. I’m like, ‘Wow, what if we did something totally out of the box?’ When he came up with this sound, it was like I had not only found the love of my life, but I found my voice in music again. So, this is where we are with The War and Treaty. It’s been one amazing journey.” 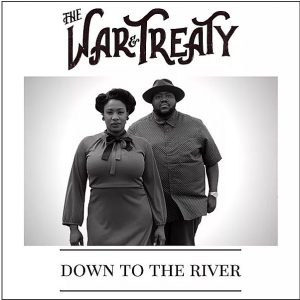 The War & Treaty, “Down to the River” EP

That journey actually began in 2004 after Trotter joined the U.S. Army and was sent to Iraq “fresh out of basic” training.

“I got over to the war and I was overcome with fear, of course,” he recalled, noting his unit was camped at one of Saddam Hussein’s former palaces, where the Iraqi president had left an old upright piano.

“I would spend most of my time down playing on that piano, trying to learn, just to calm myself from the fears and anxiety. But it (music) didn’t really unlock for me until one of my battle buddies was killed in action and I wrote a song and sang it at his memorial out in the war.”

That impressed his commander so much, Trotter spent the rest of his overseas tour traveling, writing songs and performing at memorials for fallen soldiers. At one point, he even took first place in a “Military Idol” competition in Germany, a contest patterned after the popular “American Idol” TV show.

He met Blount after his discharge in 2010, and folks soon took notice of the couple’s musical prowess and the passion they display in performing their upbeat songs. They even tell the story of a despondent woman at a Florida show last fall who was inspired to turn her life around after hearing the band’s songs about “love and togetherness.”

Trotter said it all stems from “the love that we have for one another and our band and our town and especially our country at the moment with some of the stuff that’s threatening. It’s just really good to make sure that whatever you’re doing is authentic and that it’s coming through – also, preaching our message about togetherness and unity and inclusiveness and love. When you think about all those things and think about what it can do, that fire burns inside and gives you that gospel revival feeling.”

Friday’s Local Spins on WYCE radio show also featured the debut of new local and regional tracks by The Native Howl, Cosmic Knot, Maitri, Gifts or Creatures and The Out of Favor Boys, along with music from The Outer Vibe, May Erlewine (this week’s “musicians’ pick”) and Diff & Dudley.