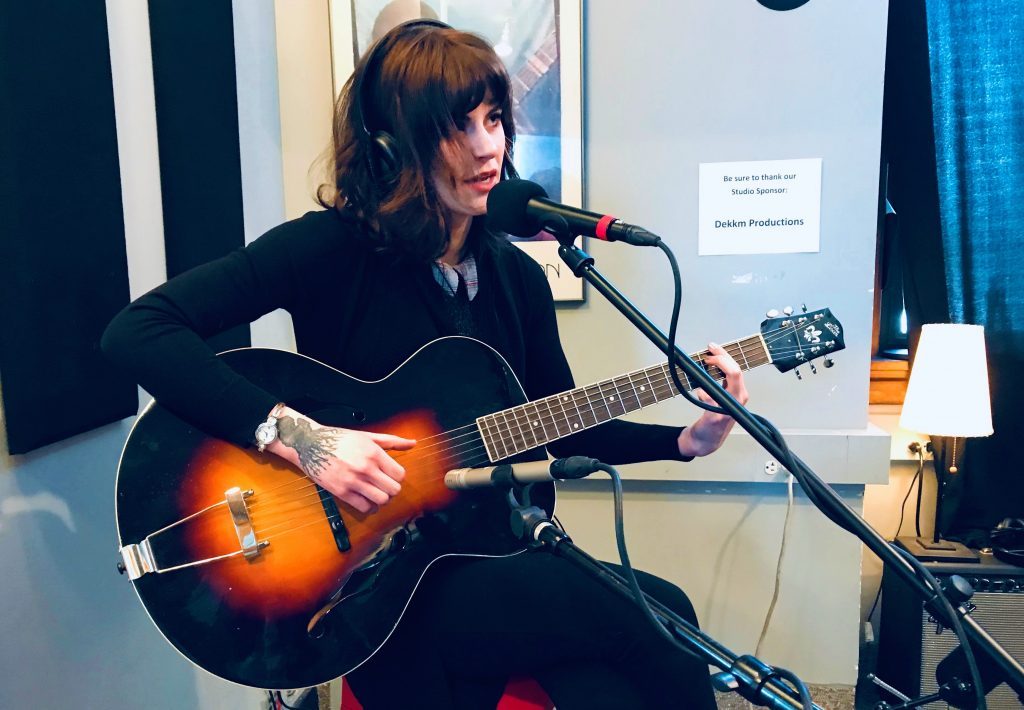 Encouraging Young Talent Whenever She Sees It: Olivia Mainville at WYCE.(Photo/Local Spins)

Olivia Mainville vividly recalls the anxiety and uncertainty of stepping on stage for the first time as a teenage songwriter at Holland’s Park Theatre during an open-mic night several years ago.

“It was very scary. I was not good back then. I was so nervous,” she said of playing open-mic sessions.

“I’m definitely a lot more comfortable on stage now. Back then, I was a nervous wreck. I guess the way to get over it is just by making yourself do it and get out of your comfort zone. That’s what I kept making myself do.” 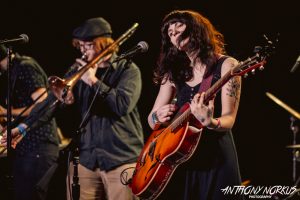 These days, Mainville is not only a seasoned 22-year-old performer, touring act and recording artist who fronts Olivia & The Aquatic Troupe, but she also now hosts the weekly open-mic sessions at Park Theatre on Tuesdays.

“That’s also a very fun, rewarding job, just to see new faces and have these people take a chance and get up on a stage and play in front of people,” she said of mentoring and fostering up-and-coming musicians.

“I do try my best to encourage young talent whenever I see it. … We’ve had a lot of repeat people who keep coming to open mics and they keep getting better. It’s fun talking to them and hearing how much they enjoy playing at Park. It always makes me happy when people are having a good time and they’re comfortable at a place.”

Mainville’s role as steward of the open-mic nights – which start with signups at 7:30 p.m. Tuesdays ($2 admission) – is just the latest in an action-packed musical journey for the Holland resident who released her first album, “Full Steam Ahead,” as a home-schooled 18-year-old back in 2014. 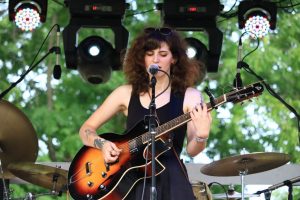 “I did go through a lot of different phases and lots of different band members,” said Mainville, whose “main gig” is fronting the indie-folk/gypsy swing band Olivia & The Aquatic Troupe.

Band members recently wrapped up recording the follow-up at EastWest Studios in Los Angeles, though a release date hasn’t been set.

“We’re in the mixing process for the album,” said Mainville, who plans to “sit on it” until she can determine the best way to promote the new recording regionally and nationally.

Mainville, however, did unfurl solo acoustic versions of two songs from that forthcoming album during this week’s edition of Local Spins on WYCE. Check out the video of her performing “Higher Ground” here, with the full radio show podcast below.

She chose the historic EastWest Studios after watching the documentary “The Wrecking Crew” about studio musicians who played on some of the biggest hits of the 1960s and 1970s.

“I just love the sound of it and I love the music, so I thought this would be a good place,” she suggested, “not just to get it to sound the way I wanted to, but it would be good inspiration.” 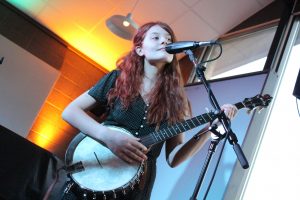 Mainville performs regularly solo, as a duo with Brandon James and with the full band. Upcoming shows include March 22 at Short’s Brewing in Bellaire, March 23 at Stormcloud Brewing in Frankfort, April 24 at SpeakEZ Lounge in Grand Rapids (for Local Spins Wednesday) and April 27 at Old Dog Tavern in Kalamazoo.

May shows along the lakeshore include a May 10 appearance at Park Theatre with the Theatre Bizarre Orchestra and May 19 at Salt of the Earth in Fennville.