The respected lifelong musician, educator and jazz trombonist was honored during a special celebration on Monday, joining his wife, Robin Connell, as ‘musician of the year’ recipients. The profile at Local Spins. Musician of the Year: Paul Brewer has had a lifelong passion for jazz and music. (Photo/Tori Thomas)

Through the time capsule of recorded video, Dr. Paul Brewer stands at the foot of the stage inside the cavernous Fountain Street Church in Grand Rapids, trombone in hand.

An all-black suit drapes over his frame and a newsboy cap adorns his head. His trombone is a mere extension of his own body, stretching like a tree limb from his pursed lips. He operates the instrument seamlessly, working the slide with impressive precision.

Brewer was recently named Musician of the Year by the West Michigan Jazz Society, an honor accorded in 2017 to his wife, Dr. Robin Connell, someone he performs with regularly. Brewer officially was feted Monday by the society at Watermark Country Club. 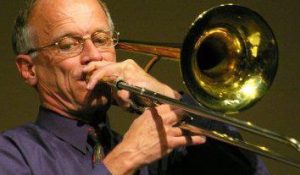 “I’m very happy about it. I’ve been, you know, enchanted and in love with music forever. And so I never thought about winning an award or anything like that. That’s not the reason I ever played,” Brewer says over the phone.

“I was immersed in music from early childhood and under the direction of my father. It was like fate. I think more than anything else, I don’t know how I could not have chosen music, because of the environment that I was in,” Brewer says.

“My father played trombone. I asked him about it at a young age, and he got it out and put it in my hands and showed me how to blow and showed me the positions and played it. It was available. It was right there. So it just fell into place more than anything else. I didn’t really choose the trombone, it seems to have chosen me.”

PLAYING IN NUMEROUS ENSEMBLES, PERFORMING WITH SOME JAZZ GREATS

When asked about the nuances of the instrument and what makes it unique from others, Brewer mentions the challenges of not having valves or buttons, simply a single slide that determines the pitch.

“There are different kinds of combinations you have to come up with for a trombone. You might be moving the slide just a little bit or a lot and then changing directions back and forth,” Brewer says. “You end up with more of a vocal quality. I think more than any other instrument, the trombone sounds like somebody singing.”

In addition to his teaching duties, Brewer has been active as a professional trombonist since 1970. While jazz is his main musical endeavor, Brewer has also played in a variety of musical ensembles, including orchestral groups and rock ‘n’ roll bands. 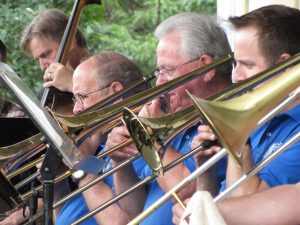 His seasoned career as a trombonist in musical theater productions allowed him the opportunity to work with celebrities such as Mickey Rooney, Ann Miller, Richard Harris, Robert Goulet and others.

As a jazz performer, Brewer has performed with such greats as J.J. Johnson, Max Roach, Urbie Green, Mel Torme and Randy Brecker. He also plays jazz trombone in the Grand Rapids Jazz Orchestra and the Gull Lake Jazz Orchestra.

“More than anything else, I enjoy being able to engage with the people who are honoring me. And whenever I’ve been in a situation like that, I’ll credit my forebears, the people I wouldn’t be here without. My father, my first band director, all the great teachers and the great jazz musicians I’ve worked with,” he says.

“I’ve had the opportunity to play alongside some of the greatest. The feeling is about gratitude more than anything else.”