Much-respected jazz advocate and Grand Rapids pianist Robin Connell is a self-described ‘workhorse’ who will be honored at a May 15 banquet. Learn more about this devoted musician. 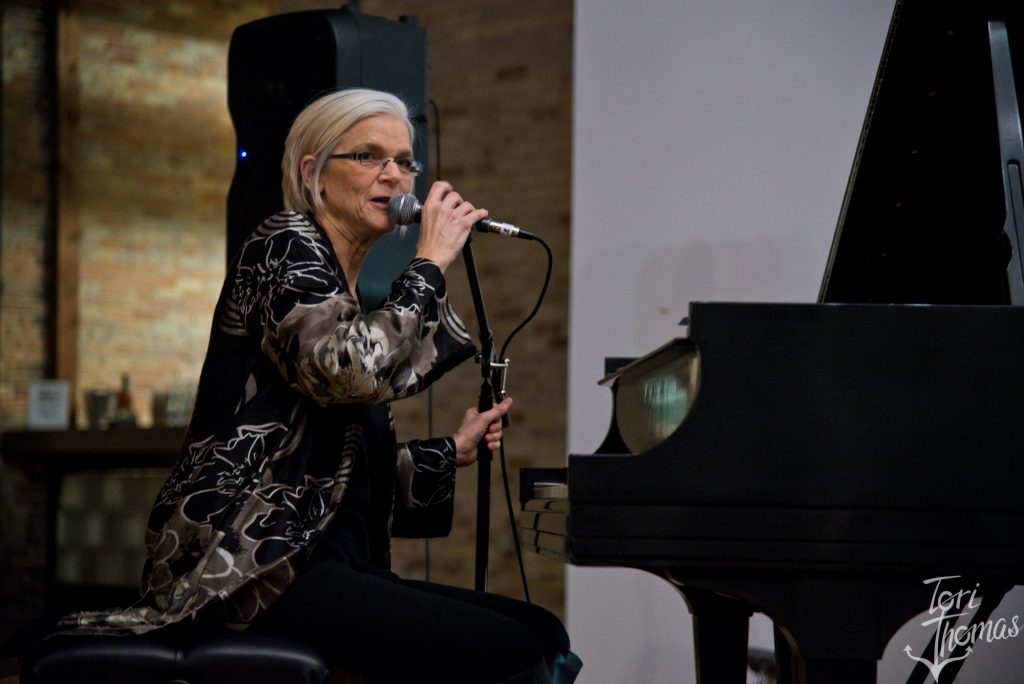 When pianist Robin Connell moved with her family from Colorado to Grand Rapids, she approached their new chapter with enthusiasm, ready to see what the area could do for her family.

But now, years later, the West Michigan Jazz Society has taken the opportunity to reward Connell for all she has done for the local music community. 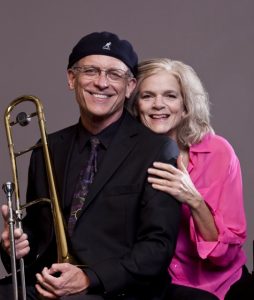 A professional performer and longtime music educator, Connell has been named Musician of the Year by the West Michigan Jazz Society.

Connell identifies first as a jazz musician, because that is what she loves and focuses on most of all.

“When starting out, I was less concerned with being an artist or singer-songwriter, and more interested in becoming the best musician I could be,” she said. “I wanted my skills to develop so I would be able to play all kinds of music, not limited to only my own material or style.”

Connell soon began accepting almost every job, gig or opportunity to play – sometimes purely for the income. Each new experience forced her to expand her skill set and constantly push her knowledge and experience.

Raised in Detroit and Northport, music was so important in Connell’s family that her parents bought a piano before they bought a car. She started studying music at age 7, including stints with the pipe organ and classical voice.

But when she first heard noted keyboard player Eddie Russ at the old Les Idees, Connell became entranced by jazz. She studied music at then-Grand Valley State College and earned a doctorate of arts in music theory and composition from the University of Northern Colorado.

Connell met her husband, Paul Brewer, while they were summer camp teachers at Interlochen Center for the Arts. They moved to Grand Rapids when he accepted a faculty position at Aquinas College in 1999 as director of instrumental music.

WARMLY WELCOMED AND INSPIRING OTHERS

“Paul got a call from someone in the West Michigan Jazz Society, inviting us to a welcome party at one of the members’ homes,” Robin Connell recalled.

“We had our infant son with us, because we did not know anyone in Grand Rapids yet to babysit. Everyone was very friendly, and asked us questions, and I did feel quite warmly welcomed.”

Connell spent the first few years in Grand Rapids in a number of music positions, including choir accompanist at Fountain Street Church and as a music department adjunct faculty member at Grand Rapids Community College, as well as teaching at Interlochen Arts Camp.

“I feel I’ve been able to develop some friendships partly due to the West Michigan Jazz Society,” she said.

“It is very much like other volunteer member groups I’ve belonged to – whether it is a church, co-op, or social organization. The more one becomes involved, the more one receives in return.”

Connell believes the WMJS is part of a larger West Michigan music picture that includes musicians, educators, patrons, venue owners and students. Many other performers share the stage with Connell from time to time, including her husband. 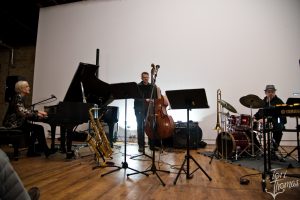 A ‘Shout-Out to Workhorses’: Connell with the Robin Connell Trio. (Photo/Tori Thomas)

WMJS will present the award to Connell at a special banquet on May 15. But for now, she said it feels great to realize there is so much appreciation for her efforts around the area.

“Recognition helps a self-employed person gain more work,” Connell said. “For that, I am especially grateful to the West Michigan Jazz Society for this award, and I hope my continuing efforts in music and education enrich those around me.”

Connell said in a similar way, others in the local music community enrich her own experience.

“Hearing other people keeps me inspired. I often experience two, almost simultaneous, thoughts – one: ‘Wow! I want to play like that!’ And two: ‘Why do I even bother? They are so much better than me!’,” she said.

“For me, it is a fascination with music, and my desire to share that with others. My husband and I share this belief: Everything boils down to fear versus desire. If the desire is great enough, one will push through the fear – and vice versa. My desire to play, and improve, pushes me past the very real fears I’ve had, and sometimes still do.

“There is also the reality that, once I chose to support myself by playing music, I had to push past the fear, or I wouldn’t be able to pay my rent. By jumping in the way I did – perhaps foolishly – I put myself in a situation where I had to improve.”

Shannan Denison, WMJS president, said Connell received multiple nominations for Musician of the Year from other members and past recipients of the award.

Connell clinched the award because she’s a jazz ambassador in the community, and contributes to youth programs and activities that help pass jazz on to future generations. Above that, Denison said, Connell has served as an inspiration to others, spending countless hours on the jazz scen as a performer and educator. 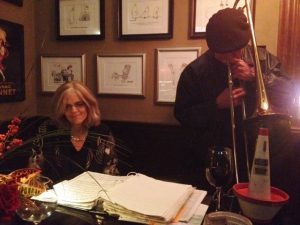 Inspiration and Entertainment: Connell and Brewer performing as a duo. (Photo/Local Spins)

“Robin is a huge advocate for jazz in the local music community. As a musician, she is humble about her talents, and quick to share the stage,” Denison said.

“The best jazz musicians are not only great soloists, but great listeners, too – as they are playing, they listen to what everyone else is playing, and play in a manner that creates a beautiful complement. Robin does that as a musician. She also provides jazz education to our youth. This keeps the tradition of jazz alive in our community.”

Connell hopes she can impact and inspire everyone who hears her music.

“My hope is that anything I do somehow enriches another person’s life. It seems extremely self-centered to be a performer. Yet, I’ve realized that we all need relief from the daily grind, or to be inspired spiritually or emotionally moved,” she said.

“Entertainers and artists serve that function. Some audiences seek entertainment, while others seek inspiration, and some seek both. As a performer, I try to address the latter category. I hope I am entertaining, but in the right venue, I hope to inspire.”

When Connell first decided to be a professional musician, she simply wanted to be able to earn her living as a musician.

“I see myself as a ‘workhorse’ musician who has, at times, also developed a personal artistry,” she said. “A workhorse may not be recognized for the contributions it makes to the farm, when standing next to the winner of the Kentucky Derby. Perhaps the same sometimes holds true for musicians. There are many musicians in the Grand Rapids area that have top-notch musicianship skills, who are often publicly unrewarded for their achievements.

“Yet these musicians still enrich people’s lives. As it becomes increasingly harder to earn a living as a musician, I want to give a shout-out to the workhorses, and encourage people to consider how live music impacts your life.”

The West Michigan Jazz Society’s 2017 Musician of the Year Banquet for Connell is set for 6 p.m. May 15 at The Guest House, 634 Stocking Ave. NW, Grand Rapids. Connell will be joined on stage that night by Brewer, Steve Talaga, Laurie Sears, Chris Kjorness and Tim Froncek. Happy hour will be from 6-7 p.m., dinner at 7 p.m., followed by dancing until 9:30 p.m. 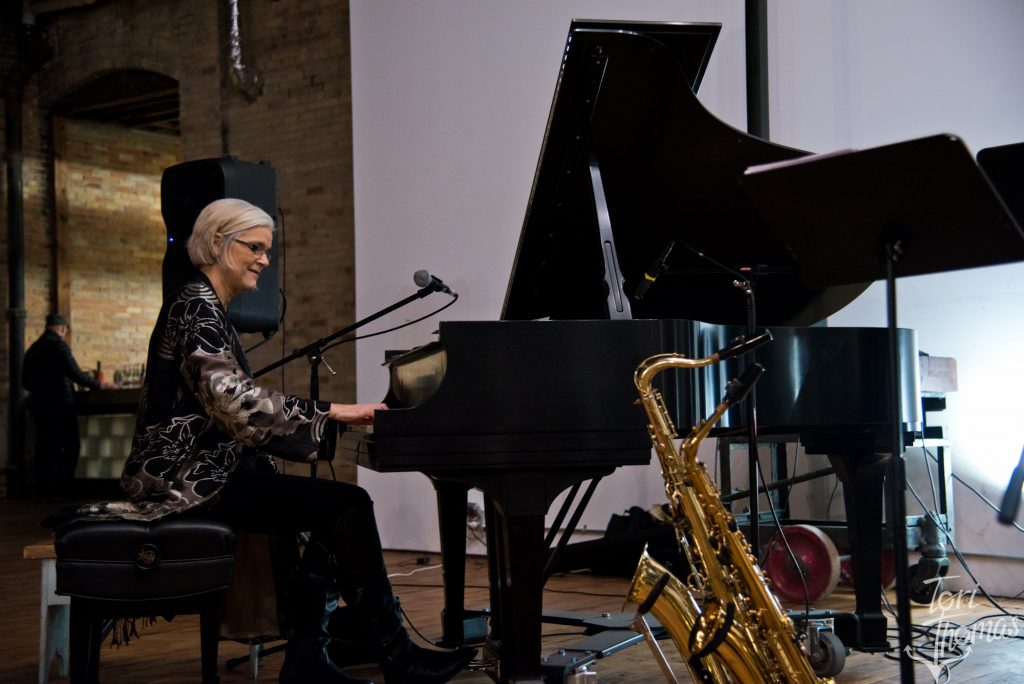