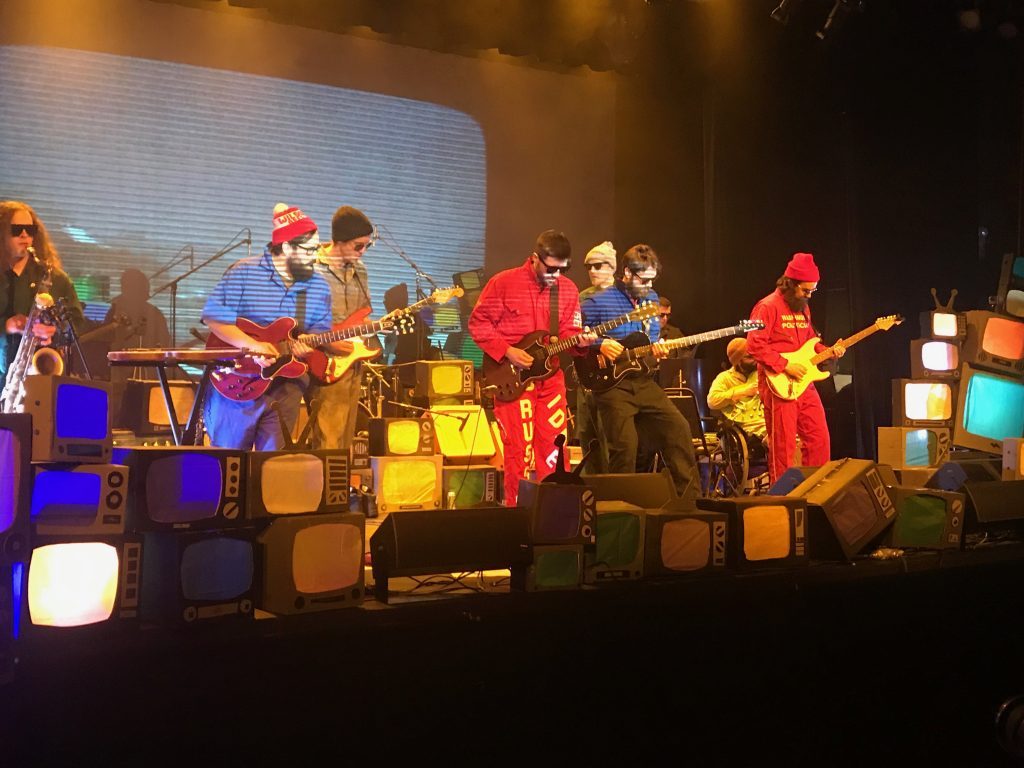 On the Wealthy Theatre Stage and Featured in the Playlist: Public Access. (Photo/Local Spins)

EDITOR’S NOTE: With its weekly playlists, Local Spins has regularly showcased places in West Michigan where live music has been silenced due to COVID-19. Today, the staff at Wealthy Theatre — Sarah Nawrocki (director), Caleb Dillon (front-of-house manager), Geoff Hudson (technician) and Chris Kotcher (tech services director) — offers this roster of faves, including artists who’ve played Wealthy Theatre in the past, as well as music from films and theatre productions presented there.

Grand Rapids’ Wealthy Theatre has hosted a wide range of memorable concerts and performances over the years — shows enhanced by the historic and intimate 400-seat setting.

While the much-beloved, 110-year-old venue operated by the Community Media Center has been shuttered due to the pandemic the past 10 months, staffers have offered up live-stream performances and otherwise look forward to eventually reopening.

“Although Wealthy Theatre has been closed to the public since March 13, 2020, our team has kept busy hosting and producing a wide range of virtual content to keep our community entertained,” said Sarah Nawrocki, director of the theater.

“We remain hopeful about being able to reopen when it is safe to do so, and in the meantime, we will continue to collaborate with local artists and organizations virtually.”

Donate to Wealthy Theatre here, with a new online merchandise store at teespring.com.

1. “On The Mend,” Seth Bernard & May Erlewine – Seth & May have played many shows at Wealthy Theatre, from sold out concerts to intimate gatherings. This song of theirs served as the soundtrack to a video we produced, highlighting how far the historic theatre had come.
Wealthy Theatre “Before and After”

2. “A Quick One, While He’s Away,” The Who – It’s always a thrill to experience brilliant film visuals and carefully curated soundtrack music working perfectly in sync. Rushmore (Wes Anderson, 1998) played along with several other of the director’s features to form an unofficial “Wes Anderson Month” celebration during the month of May 2018.

4. “Canned Heat,” Jamiroquai – A last-minute change of venue left us delighted to host a screening of Napoleon Dynamite (Jared Hess, 2004) plus a Q&A with cast members Jon Heder, Efren Ramirez, and Jon Gries. Their easy-going sense of humor, patience, and willingness to answer audience questions long into the night made for one of our more memorable events in recent history.

5. “No Songs For The Weekend,” Jordan Hamilton – The energy during the virtual concerts with WYCE is a unique one. Musicians performing to an empty auditorium, for audiences at home. Among a quiet and difficult year for WT, Jordan’s set in September was filled with positivity, light, & of course his unique Jammie award-winning sound. It was his first time in the Wealthy, and hopefully not the last.

6. “The Man In Me,” Bob Dylan – “The Big Lebowski” by Joel & Ethan Coen (1998) is always a crowd-pleaser at Wealthy Theatre. This Bob Dylan track has echoed through our auditorium many times as large, appreciative crowds have gathered again and again to hang out with The Dude and his friends one more time.

7. “Steve Inskeep,” Public Access – In a world before social distancing & venue restrictions, Michigan super-group Public Access packed the house & stage here in 2018. The show was an impressive sonic undertaking for our room, with a dozen musicians in the band (plus special guests). The technical undertaking pulled out just as many stops & the recording captures the great energy among the band. See if you can spot the VHS angle.

8. “Suspiria (Main Theme),” Goblin – We collaborated with The Pyramid Scheme in November 2018 to bring the world-renowned group Claudio Simonetti’s Goblin here all the way from Italy. Not only did they perform a live musical accompaniment to the cult classic horror film, “Suspiria” (Dario Argento, 1977), but they also stuck around to play a few of their other memorable soundtrack cues.

9. “Into the Light,” Heartless Bastards – Simply put: This show rocked. And the lyrics of this song feel more relevant than ever.

10. “Jump into the Fire,” Harry Nillson – Similar to 2020, many might remember how challenging the year 2016 felt. At midnight during the NYE concert, members of The Go Rounds, Vox Vidorra, The Crane Wives and Seth Bernard celebrated the beginning of a new year on stage together with this cover of Harry Nilsson’s “Jump Into The Fire.”