This video roundup also features northern Michigan students performing an Andy Grammer classic and a peek at the first live concert in the Grand Rapids area in three months. 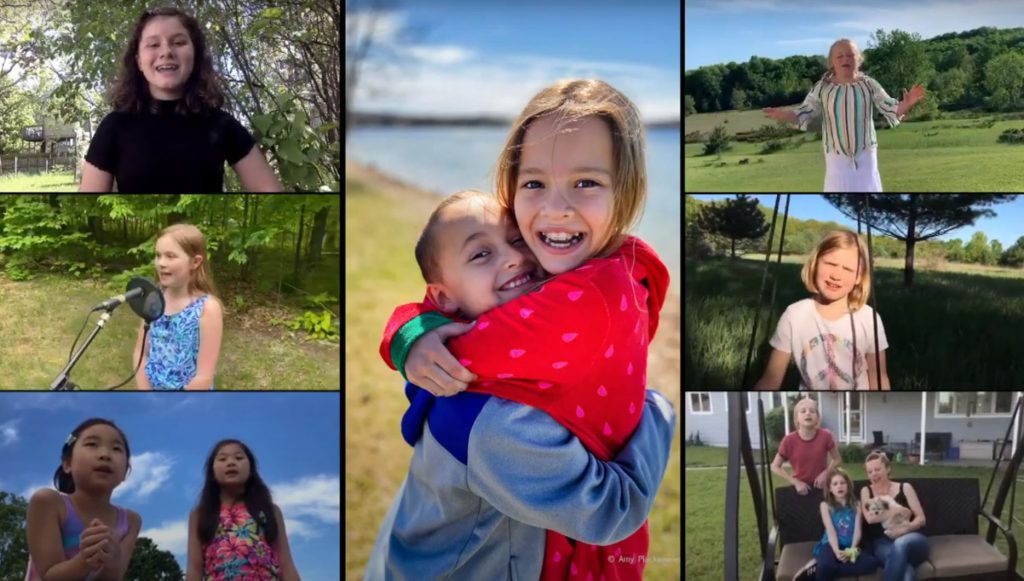 ‘Don’t Give Up on Me’: Some of the northern Michigan students featured in a new music video.

As we’ve seen during the coronavirus pandemic, a crisis inspires artists to create thought-provoking art.

The death of George Floyd and the widespread outrage and protests that have followed reflect even stronger emotions, sparking even more compelling music.

But there’s more on the docket, including another inspiring video from some northern Michigan students, the latest star-studded entry from rapper Sligh Talkbox and Local Spins’ video of the band and fans at the first live music show in the Grand Rapids area in nearly three months.

The new song from the Grand Rapids jam band was written by Isaac Berkowitz and assembled from individual tracks recorded by band members in five different locations. The video features striking photos of protests taken by Nathan Purchase, Nick Small, Adam Berta, James Saville and Ryan Broton. Proceeds from sales of the track on Bandcamp.com here will be donated to NAACP Grand Rapids and The Bail Project. Read more about “George Floyd” at Local Spins here.


Although the song was written and recorded last year for Kalamazoo artist Dean Madonia’s “My Calliope” album, the message “is more pertinent than ever,” with images compiled for the video from recent events. The song features drummer Jesse Williams and lead guitarist Val Lupescu.

VIDEO: N. Michigan Students/Harbor Springs Music Department, “Don’t Give Up On Me”

Some folks might remember Jason Byma’s third-grade students at Harbor Springs’ Shay Elementary School making a big splash with their video rendition of The Accidentals’ “Michigan and Again” in 2017. Well, Byma and students from across northern Michigan are back with a “100 percent virtual” video compiled from footage of kids and parents singing and performing Andy Grammer’s “Don’t Give Up on Me.” As always, inspiring. “We thought it was fitting when the COVID-19 crisis started and it seems even more fitting today,” Byma told Local Spins.

During the pandemic, the Grand Rapids Symphony has regularly been posting performances — recorded remotely — that have truly been uplifting and expertly produced. This is one of the latest in the series.


On the first day that restaurants and bars in lower Michigan could reopen following state restrictions laid down due to COVID-19, The Score hosted a performance by Grand Rapids’ Iron Town duo — and a large, somewhat social-distanced but unmasked crowd was on hand. Read more in this recap at Local Spins: Grand Rapids’ first live music show since March draws outdoor crowd to The Score.