Released last Friday as part of school project, the music video already has garnered 20,000-plus views and support from The Accidentals, who will sing the National Anthem at a Detroit Tigers game Tuesday. 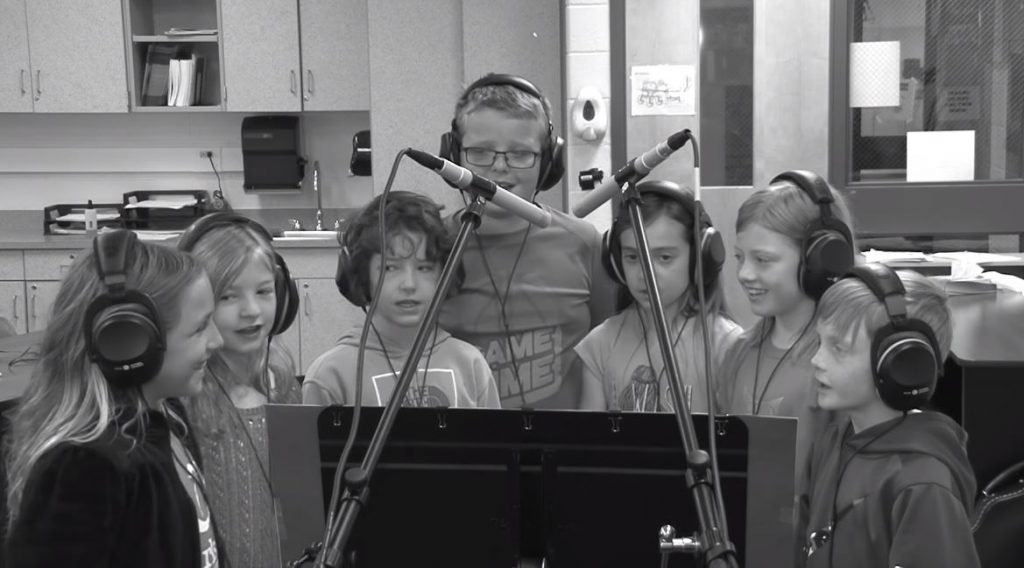 Behind the Scenes: Third-grade students in the video for “Michigan and Again.”

The young stars in The Accidentals have been supplanted, happily speaking, by an even younger set of up-and-coming northern Michigan stars. 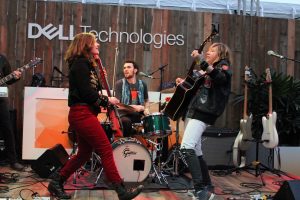 ‘What We Live For’: The Accidentals are tickled by the third-graders’ version of “Michigan and Again.” (Photo/Anna Sink)

Of course, in finding their own musical spotlight, third-graders at Harbor Springs’ Shay Elementary School got plenty of help from alt-folk’s uber-popular Accidentals who supplied the soundtrack for the youngsters’ impressive video rendition of the Traverse City band’s “Michigan and Again.”

The video – which has racked up more than 20,000 views on Facebook and YouTube since being released Friday afternoon – features the young students singing the tribute to the Great Lakes State over an instrumental track provided by The Accidentals. Images of the students and beautiful Michigan scenes are interspersed throughout.

“This is what we live for. It’s so inspirational for us,” said Sav Buist of The Accidentals. “We love the connection that is ‘Michigan and Again,’ and that we can see hearts healing, people hugging and memories being made in real time. I think every artist hopes for a song that creates that kind of connectivity.”

In planning this year’s Michigan Unit of studies for third-graders, teacher Jason Byma – who had previously played for students The Accidentals’ version of “Michigan and Again” – began discussing with other staff members the idea of creating their own video “using students, parents and community members’ footage to play while kids performed the song.”

THE ACCIDENTALS PITCHED IN WITH THE INSTRUMENTAL BACKING TRACK

Because the song features “complicated chord structures compared to most folk music,” the school sent a message to The Accidentals, who almost immediately responded by forwarding a previously unreleased instrumental track that could be used to accompany the students’ voices. 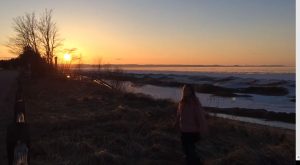 “It was our opinion that placing a face on the voices was just as important as the scenes of the state,” Byma said of the final video.

“The video has been out since Friday afternoon and has over 1,600 views on YouTube, and on Facebook – with the combination of parents/families, community members, and colleagues – the video has over 550 shares and 23,000 views. There could be more shares and views I’m unaware of.”

Buist said the Harbor Springs school is just one of many in Michigan that have started singing and playing the “Michigan and Again” song. The Accidentals’ official version of the video has attracted more than a quarter-million views on YouTube alone.

“Music is so much about the giving and receiving of hope and creating commons between strangers,” she said. “It’s an amazing feeling to see so many schools adopting the song and the next generation learning it. It’s a bit like passing down a story … a memory.” 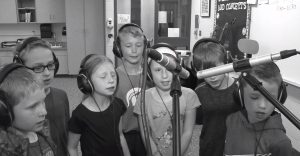 Release of the school’s video comes as The Accidentals this week take yet another step in enhancing their fame as a fast-emerging national band: The group will perform the National Anthem prior to Tuesday night’s Detroit Tigers game at Comerica Park in Detroit. (UPDATE: View the video of their performance below.)

Buist said DeAnn Forbes of Driven Communication helped set up the Comerica Park appearance. “She made the connection for the Tigers because it’s Michigan night,” she said. (The performance precedes the game which starts at 7:10 p.m. Tuesday.) “I remember watching the Tigers with my dad, my brother and my grandpa a couple of years back, and it’s one of my favorite memories ever. Our families are coming down to watch the game, so it’ll be really nice to hang with them and watch some baseball together.”

The Accidentals also play Founders Fest in Grand Rapids on Saturday, part of a hectic summer of touring that also includes the release of their first studio album on the international Sony Masterworks label in August.

VIDEO: The Accidentals singing the National Anthem at Comerica Park (6/13/17)