Saturday’s spectacle at The Intersection reunites two of West Michigan’s most popular rock bands from the ’90s for a fresh, post-Christmas affair. 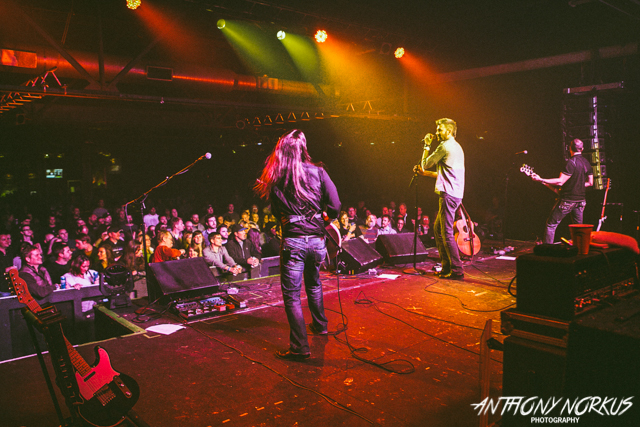 Holiday Homecoming: The Verve Pipe ups the ante this year with a boost from Domestic Problems. (Photo/Anthony Norkus)

In their heyday in the 1990s, The Verve Pipe was Michigan’s multi-platinum-selling, alt-rock claim to fame and Domestic Problems was Grand Rapids’ organically grown, college-friendly fan favorite.

Together, they represented a musical renaissance of sorts for the region’s live music scene, cultivating a loyal and loving fan base that grew up, and partied, with the rock bands’ songs and rollicking performances. 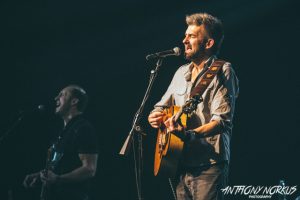 On Saturday, those two 22-year-old bands – more mature and a bit realigned but every bit as excited about revving up many of those same fans – will share the same stage for the first time in nearly two decades.

The Verve Pipe’s annual holiday show at The Intersection will include Domestic Problems for the first time ever, a shared bill that’s created a real buzz and ramped up ticket sales for an event that promises to ooze with nostalgia for longtime fans.

“Both bands were huge in the ’90s in their own way,” said Verve Pipe frontman Brian Vander Ark. “I knew DP doing it with us would be great. I knew people would want that nostalgia and I think it helps that it’s after Christmas. We plan on a packed evening.”

Domestic Problems’ Andy Holtgreive said much of the draw is about “re-living the college years” for fans who’ve long embraced both bands.

“It’s those great memories they had when they were in college, going out to see that live music, that scene,” said Holtgreive, noting Domestic Problems opened for The Verve Pipe a few times in the mid-1990s in Grand Rapids and Mount Pleasant. “With us and The Verve Pipe together, it captures so many memories and experiences, it hits a broader audience.” 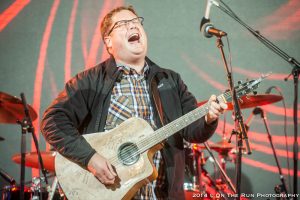 The idea of putting the two bands together – and combining the memories of Verve Pipe hits such as “The Freshmen” and “Hero,” with Domestic Problems faves like “Play” and “Bowling” – for the annual Christmas show came from Intersection general manager Scott Hammontree, who “has been saying that for years,” said Holtgrieve. “It’s just a matter of timing. We both had a date that could work. It was Scotty’s being tenacious and persistent to make it happen.”

Vander Ark quipped that staging the eighth annual Verve Pipe holiday show a couple of days after Christmas means the bands “don’t have to learn a Christmas song” for the event.

He also joked that he doesn’t recall playing with Domestic Problems in the 1990s because he doesn’t remember anything before 2002: “Those brain cells are long gone.”

But he does remember being impressed with Domestic Problems’ musicianship and devoted fan base. 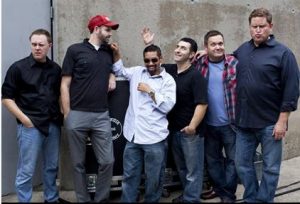 “They weren’t in the same circle that we were because they were more like a jam band,” he said. “People liked our pop sensibility. We had the hit songs. They had this organic following that we didn’t have. They’re a great band.”

Holtgreive, meanwhile, credits The Verve Pipe for “bringing this attention and excitement to the scene” that inspired lots of West Michigan bands.

“I look back at the ’90s in West Michigan as such an amazing time. It was a perfect storm for live music,” said the singer and guitarist. “I think the fans, the people really got behind it and perpetuated it.”

TOUTING AN ACCLAIMED NEW ALBUM AND EYEING ANOTHER RECORDING

But it’s not all about looking back.

The Verve Pipe earlier this year released the band’s first bona fide rock album in 13 years. The positive reception from fans and critical acclaim accorded “Overboard,” has injected new, well, verve into the band’s live gigs and more excitement about the 2014 holiday show.

“The reaction to the new album has been phenomenal from fans and the critics. If the fans and critics didn’t like it, we wouldn’t want to play the new material. It feels really good to get those accolades,” said Vander Ark, who’s also carved out a successful solo career as a singer-songwriter. 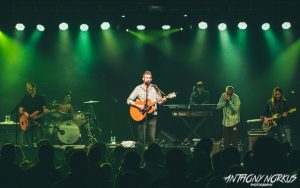 The Verve Pipe at the 2013 holiday show. (Photo/Anthony Norkus)

The band next year also will be releasing a video for “Overboard,” a song co-written with Jeff Daniels. The video was filmed in the Upper Peninsula and directed by Lawrence Carroll, who directed the band’s first video for RCA back in The Verve Pipe’s ’90s heyday.

“It’s a beautiful video and a real testament to the U.P.,” said Vander Ark, who’s also working on another children’s record (The Verve Pipe has released two kids’ albums so far) and has “got ideas” for yet another Verve Pipe album.

“None of this would exist without the fans that want to hear us play. The fact there are people who enjoy it and get something out of it and contribute to it, we’re beyond grateful that they feel that way,” he said.

“Our immediate goal is to make it to 25 years. … If fans keep coming out to the shows, we’ll keep playing. I hope to God they keep coming out, because I love doing it. This is how I feed my soul.”

Doors open at 6:30 p.m. for Saturday’s show at The Intersection; tickets are $15 and available online here. 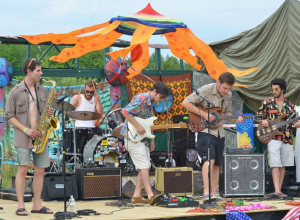 Opening the concert will be up-and-coming, East Lansing-based jam-rock-funk-jazz fusion band Desmond Jones, which has its own interesting back story involving The Verve Pipe.

Drummer John Nowak said he and fellow band member Isaac Berkowitz once were in a band at East Grand Rapids High School that competed for a chance to open for The Verve Pipe but lost. They were heartbroken at the time.

“We are excited – and laughing – about the chance to finally open for The Verve Pipe,” noted Nowak. “It’s an amazing opportunity to play in front of a large crowd we might not normally have in the jam-band/funk scene, not to mention in one of the most exciting cities in Michigan. This could be the most people we’ve performed for, and we can’t wait to showcase our talents and music for the Grand Rapids crowd.”