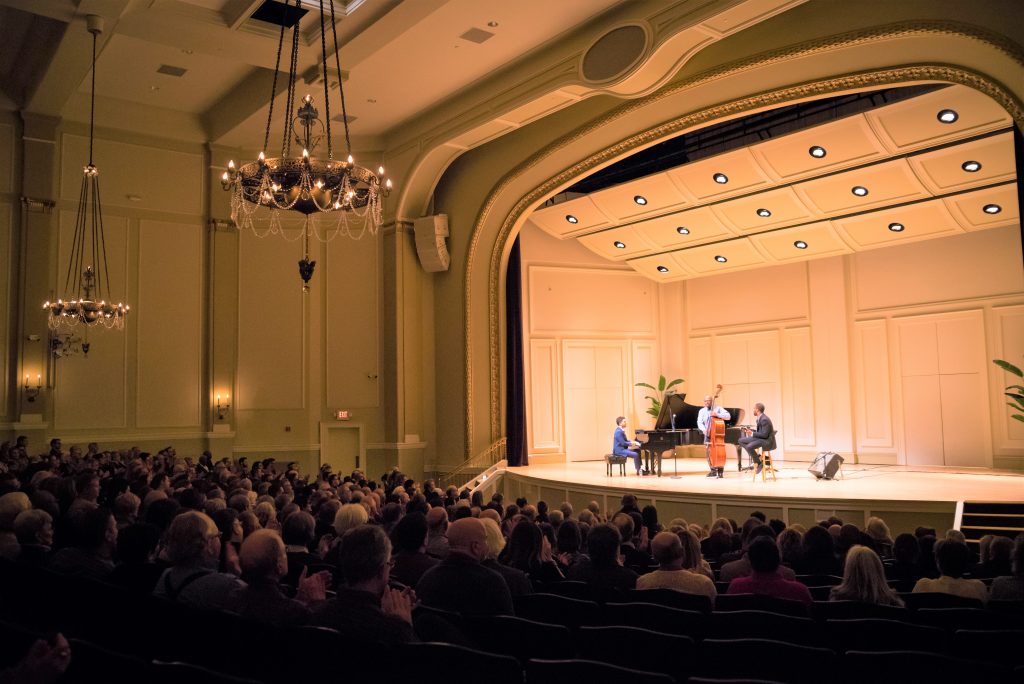 EDITOR’S NOTE: Over the past two months, Local Spins has showcased West Michigan venues whose live music has mostly been silenced due to COVID-19. Today, Cathy Holbrook, executive director of Grand Rapids’ historic St. Cecilia Music Center unfurls a Top 10 soundtrack featuring acclaimed stars who’ve performed at the acoustically pristine venue. Scroll down to listen to the artists on Spotify.

A venerable organization that’s survived two World Wars, the Great Depression and the Spanish Flu, Grand Rapids’ historic St. Cecilia Music Center has been closed since March 2020 due to COVID-19, with four concerts and a fundraiser canceled in March and April alone.

Executive and artistic director Cathy Holbrook said SCMC has done its best to adjust to the unprecedented situation, with hopes that live music will return in 2021. 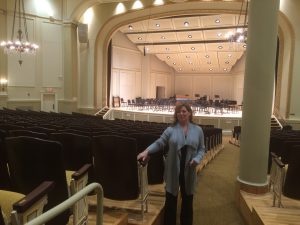 Until then, Holbrook has fashioned a Top 10 playlist for Local Spins that features some of her favorite performers from the past decade. In her own words:

“All of the 2021-22 season fall concerts have been moved to May and June of 2022. We had hoped to get back to live performances come January of 2021, but that looks unlikely. It is a very difficult time to see our stage remain dark, especially as we had the biggest season in history planned for this year.

As an alternative, SCMC is offering virtual concerts now through December and we’ll be crossing our fingers that live music will soon ring through Royce Auditorium as it has for 137 years. We plan to survive the coronavirus with the help and dedication of our patrons and donors. (Get more info and donate at scmc-online.org.)

For this playlist, I picked some of my favorite performance memories of artists who have appeared at SCMC – although all the performances are great memories – especially as we navigate months and months with no live music on the Royce Auditorium stage. Here are just a few notable artists from the SCMC jazz, folk and Chamber Music Society series.” – Cathy Holbrook

1. Rosanne Cash, “Tennessee Flat Top Box” (appeared at SCMC in February 2020) – To say that I was over the moon that Rosanne Cash was coming to SCMC is an understatement. A sold-out show in February was one of our last wonderful memories of a full house at SCMC.

2. Gregory Porter, “Liquid Spirit” (appeared at SCMC February 2018 and February 2014) – Gregory Porter has become one of my favorite artists since presenting him in 2014. I booked him a year before his appearance at SCMC, and three weeks prior to his February 2014 concert, he won the Grammy Award for Best Jazz Vocal Album. Needless to say, it was a big deal. The day of the show in 2014 the band was stuck in Chicago in a snowstorm so we had to send a car to get them and they showed up about one hour before performance time — and proceeded to knock us dead with a fabulous concert.

3. Joshua Davis, “Waiting on the Dove” (appeared at SCMC in November 2018) – This is my “local” pick. As part of the first folk series offered at SCMC, Joshua Davis appeared during ArtPrize. It was a great show with other local favorites Troll for Trout and Fauxgrass appearing on the bill as well.

4. Milk Carton Kids, “Younger Years” (appeared at SCMC in February 2019) – These two performers are a cross between the Smothers Brothers and Simon & Garfunkel. Truly wonderful harmonies and hilarious banter. It’s a cross between a concert and standup comedy. The Milk Carton Kids initially were scheduled to return in December, but now will be performing in the 2021-22 season due to COVID.

5. Christian McBride Trio, “Tangerine” (appeared at SCMC November 2017 and February 2015) – Christian McBride has appeared at SCMC twice and was slated for a three-night jazz festival in February 2021 called WinterFest, the first ever jazz festival of its kind in Grand Rapids. We will most likely be postponing WinterFest until February 2022, but Christian is committed to rescheduling and we hope to do some live-streaming with him this season. He is an amazing musician and wonderful human being.

6. Judy Collins, “Both Sides Now” (appeared at SCMC in October 2019 and February 2018) – Appearing twice at SCMC to sold-out audiences Judy Collins has proven she is an unbelievable performer and entertainer. We have plans to do a virtual show with Judy this season and bring her back to our stage in August 2021.

7. The Lone Bellow, “Pink Rabbits” (appeared at SCMC in November 2018) – The Lone Bellow TRIIO came to SCMC on an acoustic tour and the three of them blew the audience away, singing into one mic and slamming us with those amazing harmonies.

8. Rhiannon Giddens, “Waterboy” (appeared at SCMC in April 2015 and May 2018) – The first show in Royce Auditorium by Rhiannon Giddens was a real “get.” She was on the rise and we booked her just as she was almost untouchable, going on to win Grammy Awards and being featured on all the major stages and broadcasts. It was a general seating show and there was a line down the block of people coming to get the best seat. (That was the last night was did general seating.) She returned in 2018 for another sold-out show with her amazing vocals and banjo and fiddle playing.

9. Margo Price, “That’s How Rumors Get Started” (appeared at SCMC April 2017) – I would be lucky to even get CLOSE to booking Margo Price into a hall our size right now. Once again that “just-in-time” luck came into play and as she was blowing up. We booked her right after her “Saturday Night Live” performance. I was so nervous about them coming because their management was quite picky, but the minute they arrived they were down to earth and so lovely. She has gone on to become one of the biggest country/folk acts of the day, performing at all the major festivals and with legends of the business. Check out her new album with this title song.

10. The Chamber Music Society of Lincoln Center, “Mendelsohn: Sextet in D Major” (appeared annually since 2012) – St. Cecilia Music Center will celebrate its 10th anniversary season in partnership with The Chamber Music Society of Lincoln Center (CMS) next season. Each year, CMS Co-Artistic Directors David Finckel and Wu Han create imaginative programs featuring the best chamber musicians in the world. With duos, trios, quartets and beyond, our audiences have come to know and love the CMS musicians who are as passionate about what they do as any musician can be. Working with the most important chamber music organization in the country is one of SCMC’s most impressive accomplishments. This is just one example of two great CMS musicians making great music.