Boundary-pushing keyboard phenom Chick Corea was a music world giant and a jazz fusion pioneer who died of cancer last week at 79. West Michigan’s Dutcher Snedeker pays tribute to him with this playlist. 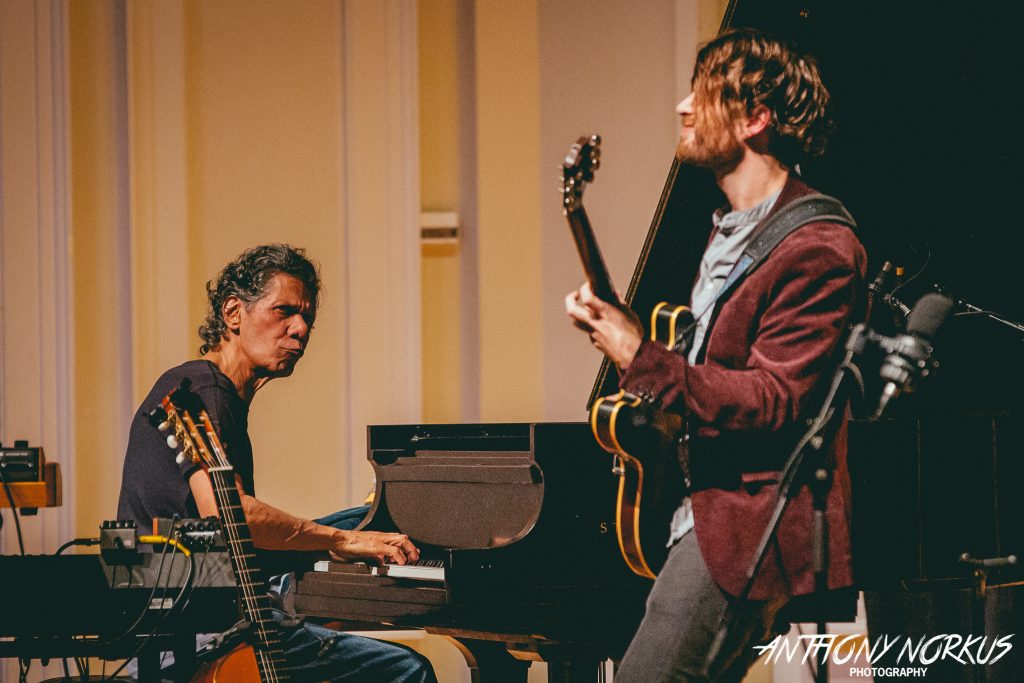 For those who may have missed the news in the constant deluge of media and social media updates that has carried us into 2021, Chick Corea, a legendary pianist, keyboardist, and synthesizer master passed away suddenly last week of cancer.

Corea collaborated with countless artists, delighting in the younger generations exploring new sonorities within the jazz umbrella while consistently showing up to perform with a presence and technical facility that truly could not have been replicated by many in his tenure.

From the Elektric and Akoustic Bands to Return to Forever to iconic albums with figures like Gary Burton, Bobby McFerrin and Miles Davis (to name a few), there are so many wonderful moments in his catalog that I continue to study. With this playlist, I hope to not only highlight some great tunes, but emphasize how each tune relates to my growth as an artist.

1. “Tones for Joan’s Bones,” from “Boss Horn” (Blue Mitchell, Chick Corea) – So Chick Corea debuted with an album called “Tones for Joan’s Bones” with his trio in 1966, but I didn’t first hear this tune until this particular track made it onto a 2005 compilation of Chick Corea’s music that I checked out from the library. This particular arrangement, with the added instrumentation and Blue Mitchell’s wonderful playing, sticks out years later from those hours of listening in middle school on my CD player.

2. “500 Miles High,” from “Light as a Feather” (Chick Corea, Return to Forever) – When I was studying for my classical piano degree at Grand Valley State University, I wanted to also explore my opportunities as a jazz musician. I found my way into Mike Drost’s combo class and some weekly performances in the house trio at The Grand out in Grand Haven on Tuesdays, which opened up my ears and vocabulary to improvisation and learning more jazz tunes. One of those tunes was “500 Miles High,” a tune that flows so nicely and has such a wonderful melody to play with as a performer, and we would listen to this version as a reference when rehearsing the tune.

3. “Galaxy 32 Star 4,” from “The Vigil” (Chick Corea & The Vigil) – This group, made in a very similar spirit to his other fusion acts like The Elektric Band or Return to Forever, contained a powerhouse lineup of musicians both on the record and on tour. When I saw the band at St. Cecelia’s Music Society, I was treated to Chick Corea alongside drummer Marcus Gilmore, bassist Carlitos Del Puerto, saxophonist Tim Garland, percussionist Luisito Quintero and guitarist Charles Altura. It was an incredible night of music capped off by the chance to meet Chick Corea after the show in the upstairs ballroom.

4. “Spain (Live),” from “Play” (Bobby Mcferrin, Chick Corea) – This was one of the first songs I tried learning by Chick Corea, a tune that I’ve performed it a few times with various groups (one time while opening for Tito Puente Jr.), and a tune I’ve heard in so many different versions, from his encore performance with The Vigil to his arrangement with the Detroit Symphony Orchestra at the 2018 Detroit Jazz Festival. This particular version, a playful duet between these two masters, was the first recorded version of the tune I had ever heard. Hearing these two weave in and out of the form while constantly giving each other material to work with and develop motivated me to seek out moments of music-making that was conversational, rather than just filling a space with noise as a young player.

5. “Senor Mouse” from “Crystal Silence” (Gary Burton, Chick Corea) – I had no idea this duet existed as a legacy collaboration until I saw their Tiny Desk concert (I know, I’m the worst jazz student!). This was another example of two veterans of music delighting in one another’s playing, effortlessly demonstrating years of study and expertise with such ease. Diving into this album after seeing the video performance a few years ago further opened my eyes to what you could do with two great players and an endless palette of arrangement ideas.

6. “Song for Sally” from “Piano Improvisations Vol. 1” – This record was a music store find for me a few years ago, when I first really started trying to build out my vinyl collection. It’s an album that reminds me that sometimes you don’t have to go into a session with a plan, trusting that you will find the great moments by simply sitting down and playing. Some tunes were created in the moment, and some tunes were explorations of melodies that ended up surfacing on recordings years later. It’s something I love doing with my solo keyboard streams, taking time to play around with familiar melodies and being unafraid to re-contextualize things people are familiar with as listeners.
(Video unavailable; scroll down to listen via Spotify)

7. “Bessie’s Blues” from “Chick Corea Akoustic Band” – So I picked this tune to cover a couple bases. Chick Corea is known for taking familiar tunes and making them his own, paying respects to various artists through intentional arrangements of their music. This band was one that I also had the pleasure of seeing at the Detroit Jazz Festival, and it was such a stellar moment of artistry that strengthened my resolve to continue improving and wanting to be that proficient and gleeful when I reach my 70s. Seriously, the chemistry between Chick Corea, John Patitucci and Dave Weckl cannot be understated.

8. “Matrix” from “The Very Best of Chick Corea” – So I’m doing another thing jazzers hate, which is citing a “best of” compilation as a source rather than tracing the Nile back to the original album and down probably to the scents of the furniture in the recording studio. You have to remember though, I’m a bad jazz student (as I mentioned earlier). So my first exposure to this catchy melody was during my middle school years, where I would check out the maximum allowed number of CDs from the library near my house to listen to at home. This particular album was like a crash course in Chick Corea, touching on many wonderful tunes and moments in his catalog up until that time, and Matrix was one that I kept coming back to as an eager young pianist.

9. “Armando’s Rhumba (Live)” from “Rendezvous In New York” (Chick Corea, Bobby McFerrin) – I know, this isn’t the original version and it is the second duo recording between these two, but seriously, how can you not enjoy their interactions? Bobby’s pitch-perfect melodies and bass lines paired with Chick Corea’s expert comping and improvisational interactions makes this such a fun tune to listen to, and it definitely stemmed from initially listening to Play and discovering that they came together again years later for a wonderful live performance.

10. “Bitches Brew” from “Bitches Brew” (Miles Davis feat. John McLaughlin, Wayne Shorter, Chick Corea and Joe Zawinul) – This track, when I first listened to it, blew my mind apart for a few different reasons. As a classical pianist, I was so used to music being written out and scripted to showcase different concepts alongside skilled performers. As someone who listened to Chick Corea, I was used to understanding that improvisation, no matter how complex, could be traced from the notes charted on a page alongside the vocabulary they were incorporating, whether or not I fully understood it at the time. With this recording however, I had never heard so many skilled players playing so many crazy and beautiful things with so little script, it changed how I thought about improvisation and interacting with musicians on stage. Being able to balance the full depth of knowledge one has as a player with the patience to listen to their fellow collaborators in real time continues to be a goal I strive for these days. I’m grateful for albums like these to remind folks that things from fifty years ago can influence later generations to strive for pushing the boundaries of any genre.