The much-respected pianist and anti-bullying disciple brings his jazz quartet with Don Julin to Grand Rapids’ SpeakEZ Lounge for the first time. Peruse the back story about this intriguing Michigan treasure. 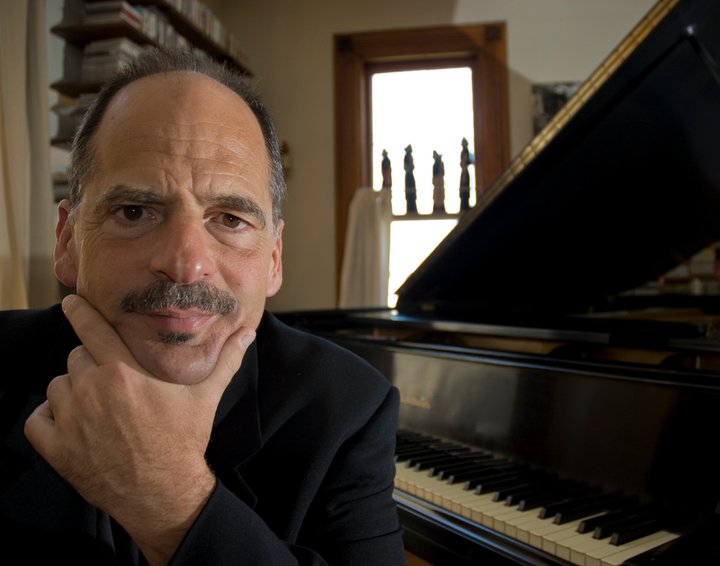 Passion for ‘Working with the Finest Musicians on the Planet’: Pianist Jeff Haas

Growing up in Detroit, Traverse City jazz pianist Jeff Haas was solidly grounded in the classical music his parents loved.

Then, he had an unexpected encounter with an all-star Motown Revue at the Michigan State Fair in the 1960s. 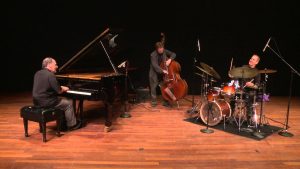 “I heard music coming from the bandshell and literally stumbled upon the Motown Revue featuring Stevie (Wonder), Marvin (Gaye), The Four Tops, Temptations, Supremes,” Haas said. “It was life-changing.”

But it was jazz that eventually captivated the classically trained Haas, who performs with his jazz quartet featuring Don Julin at Speak EZ Lounge in Grand Rapids at 8 p.m. Wednesday as part of the Local Spins Wednesdays series. (Cheeck out the Local Spins Artist Spotlight feature on Don Julin here.)

Now 67, Haas was trained by his classical pianist father, a German Jewish immigrant, starting at age 5, and listened regularly to Judaic music in the organ loft at Temple Israel in Detroit where his father was the organist. His parents founded the Chamber Music Society of Detroit in 1944, and even moved the family to West Berlin for three years to help rebuild the city’s cultural scene.

“My father was a very, very serious and driven person. I picked up on that and began practicing every day for hours,” recalled Haas, who also hosts “The New Jazz Archive,” a syndicated public radio show produced at Interlochen Public Radio.

“By the time I was 10, I was getting up at 5 a.m. to deal with my dexterity exercises so I could hang at the piano after school and focus on the cool stuff: Bach, Mozart, Brahms, Beethoven, Chopin, the staples.”

FALLING IN LOVE WITH MOTOWN, CREAM, ZAPPA AND JAZZ

Popular music had no place in the family repertoire.

“We weren’t allowed to listen to anything but classical music in the home. My dad told us rock ’n’ roll would ruin the needle on our stereo,” he said. “And I was a socially awkward child – buck teeth, braces, bullied a lot and taunted about being Jewish. The piano was my haven.” 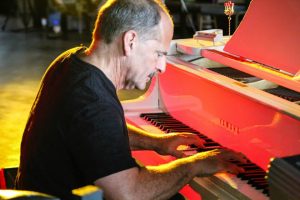 At the Yamaha: Jeff Haas appears in Grand Rapids this week. (Photo/Myrna Jacobs)

But after his Motown epiphany, Haas fell for the sounds of his city and more.

“As a teenager, I fell in love with Motown, Cream, (Jimi) Hendrix and (Frank) Zappa, all whom I had the pleasure of seeing live multiple times. I saw Zappa at least 20 times — and went to Woodstock, just for the record.”

But it was jazz that enticed Haas, who embraced the work of Duke Ellington, Thelonious Monk, Charles Mingus, Miles Davis, John Coltrane, Wayne Shorter, Dave Holland and John Zorn. All of them influence his original material.

“From a compositional standpoint, my original music lives in the intersection of jazz, R&B, Judaic and classical music,” said Haas, whose 160 or so compositions include commissions for Chamber Music America, the cities of Detroit and Traverse City and the Jewish Federation of Metro Detroit. He has released seven albums.

A project close to Haas’ heart is Building Bridges With Music Quintet, which presents his music at community centers and schools across Michigan as part of an anti-bullying program. The quintet also includes reed player Laurie Sears, Detroit musicians Anthony Stanco and Marion Hayden and Ypsilanti’s Sean Dobbins. Haas calls it “one of my biggest sources of inspiration and reward.”

“We present my original music in community centers and schools throughout the state, and use the music as a springboard for a very active and often intense discussion about the importance of open-mindedness and respect,” Haas explained. “Each musician shares stories about how bullying and prejudice have impacted their lives. We have visited over 650 schools in Michigan.” (Check out a video below.)

Most recently, Haas — who first moved to Traverse City in the early 1970s to work at Interlochen Center for the Arts — has been performing in a quartet with Sears, bassist Jack Dryden and drummer Randy Marsh and in a new quartet featuring Dryden, Marsh and mandolinist Julin, of the band Eye Ham Wes and formerly with the Billy Strings & Don Julin bluegrass duo.

While Haas has known Julin since the 1980s, they ran “in different musical circles” and didn’t start working together until the past year.

“I love what he brings to my music: his concept, the super-cool sounds and textures he incorporates,” Haas said. “Don is all over the map, so when we get together, it can sound like jazz meets bluegrass meets world music.”

The pianist said he thrives on live performances and insisted the Traverse City area has “a remarkable scene” for a small community. He performs often at Traverse City venues.

“Jazz is a team sport, and since I never got involved in sports as a young person, jazz is my chance to experience that intimacy and mutual respect, love, support and feeling like you can depend on these guys when you’re laying your emotions out there in front of an audience,” he said.

“I get up every day and get to do what I absolutely love, and work with some of the finest musicians on the planet.”